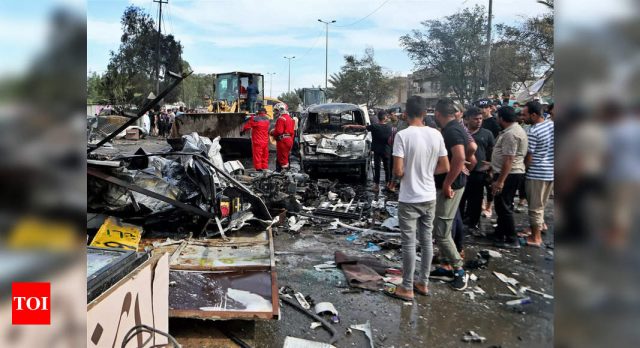 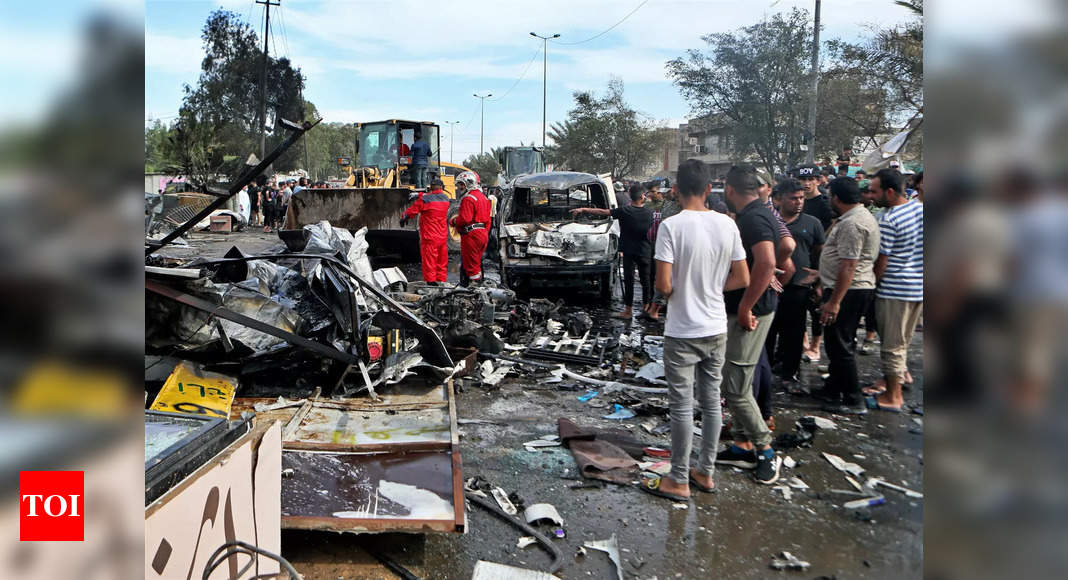 BAGHDAD: A powerful explosion rocked a market in east Baghdad on Thursday, killing one person and injuring 12 others, according to Iraq‘s military.
A police official said the blast in the capital’s Sadr City, in the Habibiya neighborhood, was caused by a car bomb. It sent a cloud of black smoke above the area. Shortly afterward, a crowd of people gathered around the mangled wreckage of a charred car and a burned-out white van. A fire engine was parked nearby.
A military statement said one person was killed and 12 injured, according to a preliminary investigation. Five vehicles were burned, it added, without saying what caused the blast. The police official spoke to The Associated Press on condition of anonymity because he was not authorized to give press statements.
Explosions in the Iraqi capital, particularly in the predominantly Shiite Muslim Sadr City district, were once almost daily occurrences but have become less frequent in the past few years, particularly following the defeat of the Islamic State group in 2017. In January, twin suicide bombings ripped through a busy market in the Iraqi capital, killing over 30 people and wounding dozens.
No one immediately claimed responsibility for Thursday’s bombing.
The development comes hours after a drone strike targeted US-led coalition troops near Irbil airport and a Turkish military base in northern Iraq.
Wednesday night’s drone attack targeted coalition forces based near Irbil international airport and caused a fire that damaged a building, according to the Kurdish region’s interior ministry and coalition officials.
Separately, a rocket attack targeting a Turkish military base in northern Iraq’s Bashiqa region killed one Turkish soldier and wounded a child in a nearby village, Turkey’s defense ministry said.
There was no claim of responsibility for either attack.

Investors Diurnal Team - April 23, 2021 0
MOSCOW (REUTERS) - The Russian military scrambled a MiG-31 fighter jet to escort a US reconnaissance aircraft over the Pacific ocean as it approached the Russian border, the Interfax news agency said on Friday (April 23), citing the Russian Pacific Fleet. "The Russian fighter crew identified the aerial target as a US Air Force RC-135 strategic reconnaissance aircraft and escorted it over the waters of the Pacific Ocean," Interfax reporting, citing the Fleet's statement. The Russian military jet returned to its home airfield after the US plane had turned away from the Russian border, Interfax reported.
World News

Investors Diurnal Team - April 20, 2021 0
WASHINGTON: After a gunman killed eight workers and himself at an Indianapolis FedEx center last week - the city's third mass shooting this year - the chief deputy coroner spoke of the toll the deaths had taken on her coworkers. "It is a very difficult job," said Alfarena McGinty of the Marion County Coroner's Office. "The staff is definitely suffering and is going to need long-term counseling." John Fudenberg knows such strain all too well. In 2017, after a gunman killed 58 people at an outdoor music festival in Las Vegas, Fudenberg's staff at the Clark County Coroner's Office was responsible for telling families their loved ones were dead. He said they delivered the devastating news several times an hour in the days following the deadliest mass shooting in US history. "I saw several employees experience what I believe was PTSD and trauma," said Fudenberg, who retired as coroner last year. Within months of the shooting, which had a final death toll of 60, five full-time staff quit or retired. The recent flurry of mass shootings in the United States has shined a fresh spotlight on the country's gun debate and left dozens more families grieving victims of the violence.
World News

Investors Diurnal Team - April 26, 2021 0
STOCKHOLM: Military expenditure worldwide rose to nearly $2 trillion in 2020, defying the economic impact of the Covid-19 pandemic, researchers said Monday. Global military spending increased by 2.6 percent to $1,981 billion (about 1,650 billion euros) in 2020, when global GDP shrank 4.4 percent, according to a report from the Stockholm International Peace Research Institute (SIPRI). Diego Lopes da Silva, one of report's authors, told AFP the development was unexpected. "Because of the pandemic, one would think military spending would decrease," he said. "But it's possible to conclude with some certainty that Covid-19 did not have a significant impact on global military spending, in 2020 at least," Lopes da Silva said. He cautioned however that due to the nature of military spending, it could take time for countries "to adapt to the shock". The fact that military spending continued to increase in a year with an economic downturn meant the "military burden", or the share of military spending out of total GDP, had increased as well. The overall share rose from 2.2 percent to 2.4 percent, the largest year-on-year increase since the financial crisis of 2009. As a result, more NATO members hit the Alliance's guideline target of spending at