The pandemic has triggered the largest revision to the value of the oil industry’s assets in at least a decade, as companies sour on costly projects amid the prospect of low prices for years.

Oil-and-gas companies in North America and Europe wrote down roughly $145 billion combined in the first three quarters of 2020, the most for that nine-month period since at least 2010, according to a Wall Street Journal analysis. That total significantly surpassed write-downs taken over the same periods in 2015 and 2016, during the last oil bust, and is equivalent to roughly 10% of the companies’ collective market value.

Companies across the major Western economies are writing down more of their assets during the coronavirus pandemic than they have in years. But the oil industry has written down more than any other major segment of the economy, following an unprecedented collapse in global energy demand, according to an analysis of data from S&P Global Market Intelligence.

Oil producers frequently write down assets when commodity prices crash, as cash flows from oil-and-gas properties diminish. This year’s industrywide reappraisal is among its starkest ever because oil companies also face longer-term uncertainty over future demand for their main products amid the rise of electric cars, the proliferation of renewable energy and growing concern about the lasting impact of climate change. 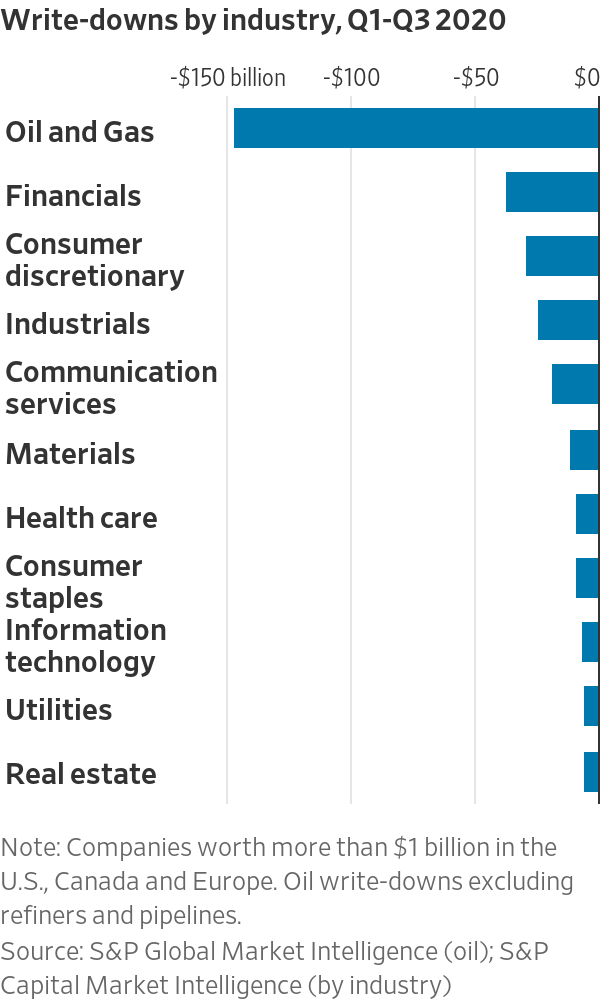 European major oil companies
Royal Dutch Shell
PLC,
BP
PLC and
Total SE
were among the most aggressive cutters, accounting for more than one third of the industry’s write-downs this year. U.S. shale producers including
Concho Resources Inc.
and
Occidental Petroleum Corp.
booked more impairments than they had in the past four years combined. The data, which encompassed the first three quarters of 2020, excluded
Exxon Mobil Corp.’s
recently announced plan to write down up to $20 billion in the fourth quarter and the $10 billion
Chevron Corp.
slashed in late 2019.

The Journal’s analysis reviewed data from S&P Global Market Intelligence, Evaluate Energy Ltd. and
IHS Markit
on impairments taken by major oil companies and independent oil producers with a market value of more than $1 billion based in the U.S., Canada and Europe.

Regina Mayor, who leads KPMG’s energy practice, said the write-downs represent not only the diminished short-term value of the assets but many companies’ belief that oil prices may never fully recover.

“They are coming to grips with the fact that demand for the product will decline, and the write-downs are a harbinger of that,” Ms. Mayor said.

U.S. accounting rules require companies to write down an asset when its projected cash flows fall below its current book value. Though an impairment doesn’t affect a company’s actual cash flow, it can potentially raise its borrowing costs by increasing its debt load relative to its assets. Companies are also required to record impairments as earnings charges.

For the oil industry, the reassessment comes at the end of an era in which a perceived scarcity of energy supplies drove a rush to buy up fossil-fuel reserves, including U.S. shale deposits and Canadian oil sands. Some of the assets they scooped up require higher oil prices that were prevalent earlier in the decade to be profitable. But after U.S. frackers unleashed vast sums of oil and gas, there have been two oil busts in the past five years and Brent oil, the global benchmark, last topped $100 a barrel in 2014.

Concerns about long-term demand are exacerbating the oversupply of fossil fuels, and companies say they have become more selective about where they invest. Projects are facing much stiffer competition for capital amid ample supplies. BP, Shell and Chevron cited internal forecasts for lower commodity prices as the cause of the impairments.

BP believes the coronavirus pandemic could have a lasting impact on the economy, Chief Executive

Bernard Looney
said in June when the company announced write-downs. “We have reset our price outlook to reflect that impact and the likelihood of greater efforts to ‘build back better’ towards a Paris-consistent world,” Mr. Looney said, referring to carbon-emissions targets of the Paris climate accords.

Exxon said in November it had been strategically evaluating its assets’ profitability under current market constraints and would slash the value of some assets by a collective $17 billion to $20 billion.

The types of assets the companies are writing down run the gamut from U.S. shale-gas properties to mega-offshore projects, and intangible assets.

Shell said its write-downs mainly related to its Queensland Curtis liquefied-natural-gas project in Australia and its giant floating gas facility, Prelude, which has struggled to deliver income after years of delays and cost overruns. The pandemic has triggered a restructuring at the company, in part to refocus on the highest-value oil it produces, while also accelerating investments in low-carbon energy.

Last week, Shell signaled another write-down of between $3.5 billion and $4.5 billion, partly against its deep-water oil-and-gas project Appomattox in the Gulf of Mexico.

“It’s not like one company [is] making a bad move,” Mr. Hong said. “It’s a threat that the industry as a whole is facing in the long run.”

Write to Collin Eaton at collin.eaton@wsj.com and Sarah McFarlane at sarah.mcfarlane@wsj.com

Why SVB Leerink Is Bullish On Kinnate Biopharma

No computer, no heat: UK's poorest struggle with homeschooling

Bitcoin falls back below $32,000 as prices struggle to find steady...

Investors Diurnal Team - January 15, 2021 0
PNC Financial Services Group Inc. (NYSE: PNC) said on Friday that its profit came in better than last year in the fiscal fourth quarter as it released funds that it had previously set aside for credit losses. The company also expressed confidence that macroeconomic conditions were now showing signs of improvement. PNC Financial opened more than 2.5% down on Friday. The stock is now trading at £115 per share. In comparison, it had tumbled to as low as £60 per share in the last week of March 2020. Are you looking for fast-news, hot-tips and market analysis? Sign-up for the Invezz newsletter, today. PNC Financial reports £1.06 billion of net income in Q4 PNC Financial said that its net income printed at £1.06 billion in Q4 that translates to £2.40 per share. In the same quarter last year, its net income was capped at a lower £1.01 billion or £2.18 per share. According to FactSet, experts had forecast the company to earn £1.92 per share in the fourth quarter. PNC Financial declared 85 pence per share of quarterly common-stock dividend last week. The bank holding company reported £3.10 billion of revenue in the recent quarter versus the year-ago figure of £3.18 billion. PNC Financial said that its net interest income stood at £1.78 billion in Q4 as compared to £1.83 billion last year. At £1.31 billion, non-interest income in the fourth quarter also registered lower than £1.35 billion in the comparable quarter of the previous year. FactSet Consensus for PNC Financial’s fourth-quarter net interest and non-interest income stood at £1.82 billion and £1.23 billion, respectively. The Pittsburgh-based company valued average deposits at
Economy

U.S. Stock Futures Tick Down in Final Trading Day of 2020