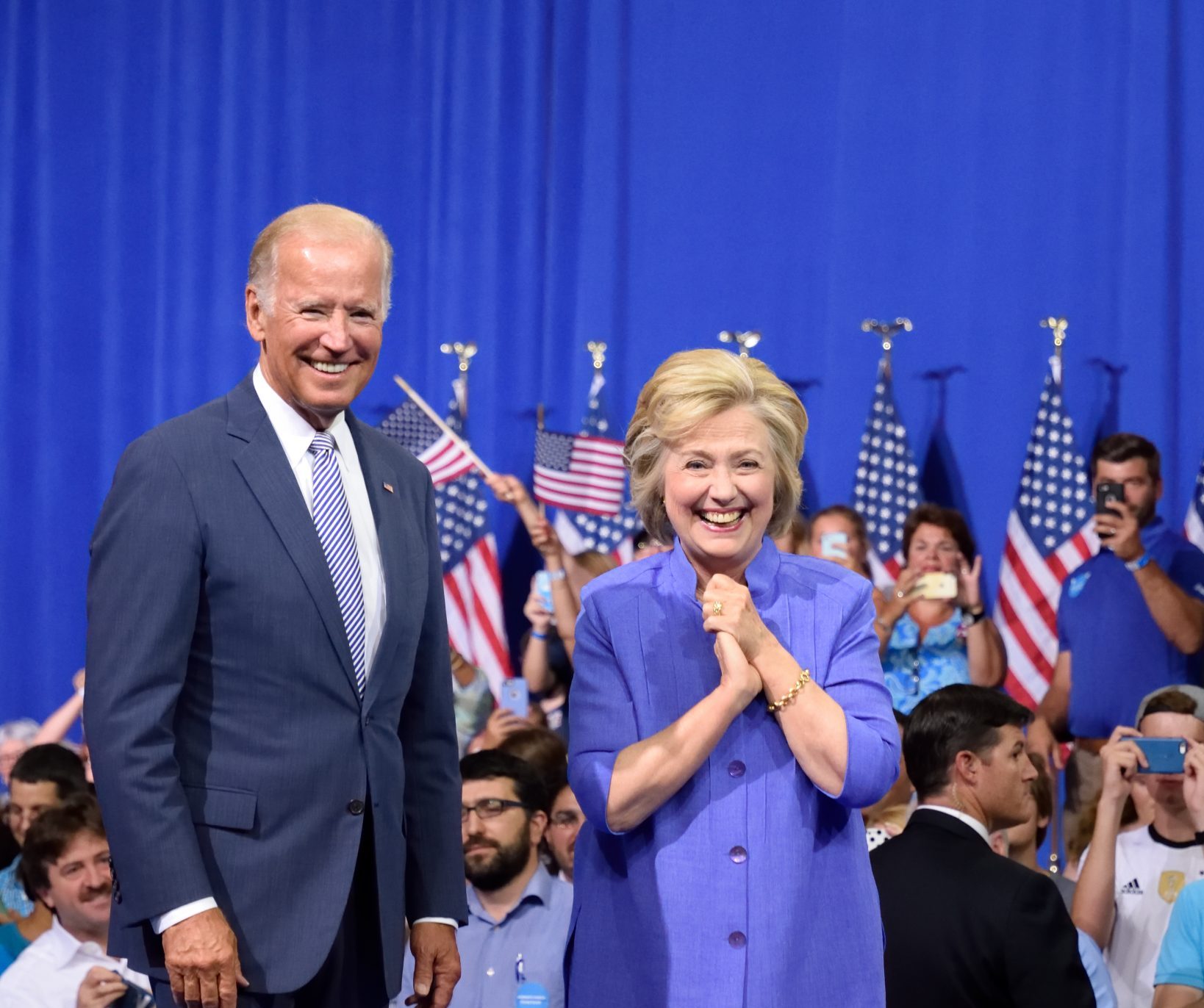 The presidential election’s ongoing saga is a tale about hypocrisy, accuracy, and legitimacy. The Left’s adherents hypocritically claim they would not be pushing every reexamination button if they were trailing. Conservatives counter that accuracy is paramount in an election so complex, close, and important. Yet the overlooked consideration in this duel across the political spectrum is America’s need for legitimacy.

The Left is up in arms over the Trump campaign demanding that the election’s outcome be thoroughly reviewed within the parameters of electoral due process. Apparently, no memories are shorter than those of hypocrites.

The Left is acting like the football team that hurries to the line of scrimmage in order to run a play and preempt a close call’s review.

Less than three months ago, on August 25, Hillary Clinton said on Showtime’s The Circus: “Joe Biden should not concede under any circumstances because I think this is going to drag out, and eventually I do believe he will win if we don’t give an inch and if we are as focused and relentless as the other side is.” Clinton added, “We’ve got to have a massive legal operation. I know the Biden campaign is working on that.”

In other words, Clinton told Biden to prepare to do what the Trump camp is now doing. For the Left, what is good for the goose is not good for the gander. Certainly, no conservative ganders should be surprised by the leftist geese’s sudden change of heart.

Just to recap: In its most important decision, during a global pandemic, America has a close outcome decided across several states under a multiplicity of varying rules. Most important things undertaken during severe stress and composed of tight margins and great complexity take … time. Unless of course you are the Left, the topic is elections, and the narrow lead yours.

Less than 141,000 votes separate Trump from Biden in Arizona, Georgia, Pennsylvania, Nevada, and Wisconsin. That popular vote deficit is just 0.09 of 1 percent of the total votes cast nationwide. Trump needs 38 electoral votes to reach the 270 needed to win reelection; several combinations of Arizona (11), Georgia (16), Pennsylvania (20), Nevada (6), and Wisconsin (10) would get him there. In all but Nevada, the margin separating Trump and Biden is less than 1 percentage point in each of these states.

The race’s complexity extends well beyond these five states’ narrow margins. The total votes cast were the largest in U.S. history. Mail-in ballots were used to an unprecedented degree. In addition, there was an enormous amount of early in-person voting. Of course, each state has its own voting requirements, certification dates, and recount procedures. Remember that in 2000 the daunting and time-consuming task to determine who won just one state, Florida, required over one month and a U.S. Supreme Court ruling.

For all the Left’s angst, the current review has not delayed any of the states’ procedures. The soonest state certification date among the five close states is Georgia’s on November 20. And Georgia has already begun a hand recount of its ballots. Both Nevada and Wisconsin share December 1 as their certification date.

None of these procedures addresses fraud or irregularities, which are separate issues with their own procedures. In short, the process is playing out as intended — and as Hillary once demanded for Biden.

In sports, close plays are reviewed from every camera angle as officials confer over them. There is a desire to “get the play right,” so that the game’s outcome is accurate. The Left is acting like the football team that hurries to the line of scrimmage in order to run a play and preempt a close call’s review.

Aside from the hypocrisy and the compelling need for accuracy, the most important reason to let the process play out as intended is the need to restore legitimacy. Of all the groups in America, none should better understand this than the Left, because no group has worked harder at delegitimizing the president and thereby the presidency itself.

For four years, the Left has worked to undercut President Trump’s legitimacy by every means imaginable. It has demanded hearings, investigations, subpoenas, and ultimately impeachment. As soon as impeachment failed, it was talking about another impeachment. When formal processes proved insufficient for its impatience, it took to the streets in increasing anger. Even now, as its goal of Trump’s removal appears in sight, it wants blacklists of former Trump officials.

During its increasingly violent vendetta, it has eroded the presidency’s legitimacy too. It has done so by proving that legitimate authority can be undermined by refusing to acknowledge it for no other reason than that it contradicted the Left’s personal preferences. By seeking to dis-establish this president, it simultaneously established a new precedent: Nullifying legal election through incessant opposition.

In its self-absorbed myopic worldview, the Left fails to see that it has constructed means that can be applied against other presidents. President Trump’s supporters — over six million more than supported Hillary four years ago, and half today’s country outside of California — feel no less aggrieved at their candidate’s loss. And they are no less justified — and certainly more so if voter fraud allegations are proven true — in feeling that way than the Left was in 2016.

America’s Left is demanding that one of the most unusual elections in U.S. history be treated as though it were normal. In its view, it is a realigning of the political world on its proper establishment-elite axis. To half of the electorate, however, it is anything but that. America needs the process to play out — as it is doing and as was intended — to allow the office, and Biden himself, to recoup some of the legitimacy that the Left has removed from the former and will deny to the latter if it isn’t careful.

J.T. Young served under President George W. Bush as the director of communications in the Office of Management and Budget and as deputy assistant secretary in legislative affairs for tax and budget at the Treasury Department. He served as a congressional staffer from 1987 through 2000.

Afghan woman shot, blinded, for getting a job

Investors Diurnal Team - November 19, 2020 0
JERUSALEM (NYTIMES, AFP) - US Secretary of State Mike Pompeo said on Thursday (Nov 19) that the Trump administration now viewed an international campaign to boycott, divest from and impose sanctions on Israel, or the BDS movement, as anti-Semitic and will deny government support to groups that participate in it. "We want to stand with all other nations that recognise the BDS movement for the cancer that it is," Mr Pompeo said on the second day of a visit to Israel as he stood alongside Prime Minister Benjamin Netanyahu, who called the decision "simply wonderful." Separately, Mr Pompeo also said the US will label exports from Jewish settlements in the occupied West Bank as Israeli, in Washington's latest move backing Israel's control of the Palestinian territory. "All producers within areas where Israel exercises the relevant authorities... will be required to mark goods as 'Israel', 'Product of Israel', or 'Made in Israel' when exporting to the United States," Mr Pompeo said in a statement. He said the new guidelines apply "most notably" to Area C, the large part of the West Bank where Israel retains full civil and military control and where much of the settler
World News

Investors Diurnal Team - November 13, 2020 0
DUBAI: Saudi Arabia has claimed that it thwarted an attack by Yemen's Iran-backed rebels that sparked a fire near an Aramco oil distribution centre, involving unmanned boats loaded with explosives dispatched into the Red Sea.In remarks carried by the state-run Saudi Press Agency late Thursday, an unnamed official at the Ministry of Energy reported that Saudi security forces had intercepted and destroyed two explosives-packed boats that it said Yemen's Houthi rebels were using to target a major refinery and terminal in the southern Saudi province of Jizan.The attempted attack took place late Wednesday near an offloading platform and caused the floating hoses that unload oil to catch fire, according to the energy official, who added that the blaze had been brought under control and caused no injuries.The official sharply condemned the attack as threatening commercial shipping routes near the vital Bab al-Mandeb strait, used for oil shipments from the Gulf to Europe, as well as goods from Asia to Europe.There was no immediate acknowledgement from Yemen's rebels, who have repeatedly fired drones and missiles targeting oil installations, airports and cities in the Saudi mainland over the course of a grinding five-year war against a Saudi-led military coalition.In September 2019, drone
World News

Investors Diurnal Team - November 16, 2020 0
SEOUL: South Korea's daily coronavirus tally has stayed above 200 for a third consecutive day, as authorities consider raising the country's social distancing rules.The 223 additional cases recorded Monday by the Korea Disease Control and Prevention Agency took the country's total to 28,769 with 494 deaths. The agency says 193 of them are locally transmitted cases while the rest was associated with international arrivals.South Korea has seen a steady increase in various cluster infections as it eased its social distancing guidelines last month amid then a viral slowdown.Health Minister Park Neung-hoo calls the latest uptick in new infections “grave” and says authorities are “at the crossroads of adjusting the physical distancing rules.”