This is the first column in a five-part Heard on the Street series on how the American economy might look once the Covid-19 pandemic is over.

With this month’s announcements of two highly effective Covid-19 vaccines, enough Americans should be inoculated over next spring and summer for normal life to begin to resume. It won’t be quite the same as before, though: Our behavior will have changed, with profound effects on the economy.

Any of these changes on their own could well have redirected tens or hundreds of billions of dollars in government and consumer spending from one place to another, but they are all happening at the same time. Some of the trillions of dollars’ worth of aircraft, cruise ships, gyms, shopping malls, office buildings, hotels and convention halls have been sitting idle may not be needed even after it is safe to use them. Others like e-commerce infrastructure can’t be built fast enough.

First we have to get through the next several months. With new cases rising again throughout the country, more people’s livelihoods will be damaged and more businesses will be driven to the brink. The losses have been most acute among service-sector businesses — especially smaller ones. Many have failed and the danger is that, with financial resources running thin during this latest Covid upsurge, more will follow in the months ahead. As a result, some of the millions of people who were put out of work by the crisis won’t have jobs to come back to when it ends.

The longer they remain out of work, the more their skills erode and the harder it is for them to find work again. That, in turn, can lower the pace at which the economy is able to grow. Those who work in some of the hardest-hit industries, such as restaurants and hotels, could have the hardest time overcoming the setbacks suffered from the crisis. The gaps between rich and poor could widen as a result. 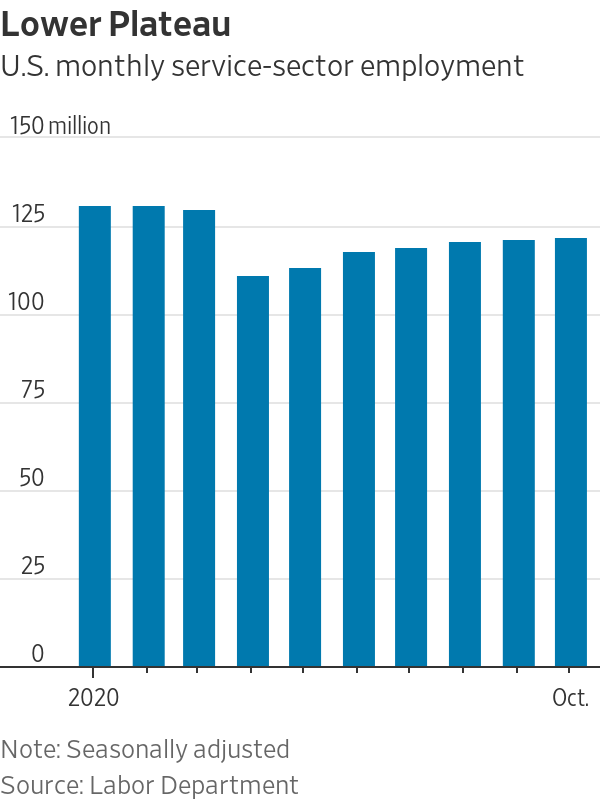 Business closures aren’t the only threat to jobs. The pandemic has also led service-sector businesses in particular to adopt new technologies that they won’t simply discard when the pandemic is over. Consider, for example, the systems restaurants have set up for customers to bypass wait staff and order food with their smartphones as a way to increase social distancing. Over the long haul, such changes could help the economy, since efficiency gains allow workers to produce more in less time. But in the more immediate post-Covid environment, it could keep people out of work.

Not that the financially fortunate will be unaffected. The crisis forced workers and businesses to change up their routines and come up with new ways of doing things. It altered consumer behavior and upended the housing market.

The work-from-home arrangements many companies and workers have cobbled together could have lasting effects. Having shown it can be done, more people might opt to work from home once or twice a week or even permanently. As a result, there would be less demand for downtown office space and fewer sales at local eateries, making commercial real estate in cities less desirable. Business travel could also fail to recover fully with the adoption of remote-meeting technologies obviating the need for many trips. Airlines, hotels and convention centers could find that some of the business they lost during the pandemic has been lost for good.

Housing choices might be affected too. While many of the city dwellers who pulled up stakes and went to the suburbs as a result of the crisis may have merely been making moves they were destined to make eventually anyway, the premium placed on extra living space has gone way up. That used to come at the cost of a tougher commute, but moving one further highway exit or train stop from the office is more palatable if you work from home frequently. A vacation cottage becomes more desirable, too, if you are able to work from it during part of the year.

Some of our other old habits and routines may change as well. Having learned how to cook, might people end up making dinner for themselves a bit more often? That is good news for supermarkets and packaged food companies and bad for restaurants. And that food is more likely to be bought from the comfort of our homes and delivered as online grocers hang on to many of their new customers.

Meanwhile, both entertainment companies and fans may prove to be less wedded to theatrical releases or live performances, permanently shifting fortunes in that business. And, while there may well be a burst of wanderlust once a vaccine is available, hotels and resorts might have permanently lost share to vacation rentals and second homes. Even the sort of airline likely to whisk us there will have changed—to the extent we keep flying.

Many American households and businesses have spent the past eight months scrambling to survive the pandemic, while for a minority it has been a windfall. With the end in sight, determining what comes after is their next challenge. Only one thing is certain: It will look different.

For years, one of the biggest days of the holiday shopping season was Black Friday. But in 2020, that could change. The coronavirus pandemic is fast-tracking big changes in retail that were already underway, pushing consumers into a digital future. Illustration: Jacob Reynolds/WSJ

Ant Speeds Ahead with Record IPO After Investor Orders Pour In

Salesforce could buy Slack for over $17 billion, and the deal...

A Broken Up AIG Would Still Have Work to Do