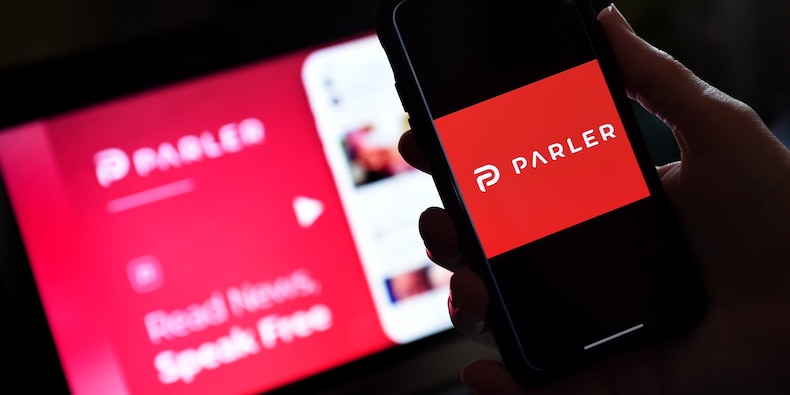 Amazon Web Services will kick Parler off its platform on Sunday at 11:59 p.m. Pacific time.

Parler will be kicked off Amazon’s web servers early Monday morning, forcing the controversial social networking site to go dark for at least a few days. But experts say that it’s unlikely to be the end of the platform.

Technology giants including Amazon, Apple, and Google have taken a flurry of actions against Parler since the insurrection at the US Capitol by a mob of President Donald Trump supporters. While the actions are likely to lead to a decline in Parler ‘s popularity, experts said the app isn’t necessarily dead in the long-term.

“It is realistic to expect that Parler will find another provider to host their services like AWS,” Max Aliapoulios, a computer science Ph. D candidate at New York University focused on understanding and mitigating socio-technical problems like cybercrime and online extremism, told Insider in an email.

For instance, the fringe message board 8kun and the social media platform Gab both used Epik as a new host, Aliapoulios noted.

“That being said, now the precedent is set and Parler will likely always have an uphill battle with finding a home to host them on the internet,” he added.

Kathleen Carley, a Carnegie Mellon University computer science professor studying disinformation, also agreed it likely won’t be the end of the network, but the decision will likely drive apps like Parler to the dark web and encrypted systems.

“Probably not the end to Parler,” Carley wrote in an email to Insider. “They just have to find another server space.” 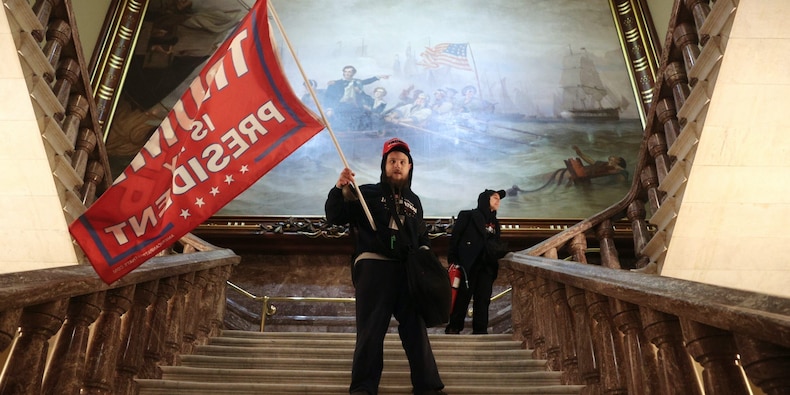 A protester holds a Trump flag inside the US Capitol Building.

In the past few months, Parler has attracted a far-right conservative audience by pitching itself as a social network with minimal content moderation. The network appeared to play a crucial role as a meeting place for many of the insurrectionists who ultimately stormed the Capitol on January 6 in a rampage that left five people dead, including a Capitol police officer.

After Twitter banned Trump’s account on Friday, some top conservative figures recently announced they would be moving to the Parler app and encouraged others to do the same.

Now, the future is uncertain for the once hot social app. While it may not be dead, Parler appears to be on life support by no longer appearing on the Apple or Google Play app stores and now being kicked off of AWS’ servers. Amazon said it will boot Parler off at 11:59 p.m. Pacific time on Sunday.

Apple and Google said the app didn’t do enough moderating. Parler users called for violence throughout the attempted coup in Washington, according to Insider reporters Margaux MacColl and Kevin Shalvey.

Parler said it was being unfairly targeted.

“This was a coordinated attack by the tech giants to kill competition in the market place,” Matze said in a statement. “We were too successful too fast. You can expect the war on competition and free speech to continue, but don’t count us out.”

Plan to ‘rebuild from scratch’ could be a daunting task

Matze also said Parler could be offline for up to a week as “we rebuild from scratch.” It’s unclear what that would entail, or how reliant Parler was on AWS for cloud services and hosting. BuzzFeed News first reported Amazon’s decision to sever ties with Parler.

“Getting booted off AWS is virtually unheard of; when people leave intentionally the planning takes months; execution can take years,” Corey Quinn, chief cloud economist at The Duckbill Group wrote on Twitter.

Quinn said it takes time to move all the data from web servers, and other AWS offerings aren’t directly compatible with other servers. “Making what you built on AWS’s systems work elsewhere is super challenging,” he added.

The platform said it had about 4 million active users as of November.

Beyond the problems of finding a new host, Parler could also face the challenge of actually running a profitable business.

Read More: Terrified Pelosi staffers barricaded themselves in a conference room and huddled under a table as pro-Trump rioters ransacked the speaker’s office: Report

Aliapoulios noted that Parler had been planning for months to launch an influence network – “basically just a portal for advertisers and influencers to make money,” he added.

“I think they may have a hard time finding enough companies, who want advertising on a site that is full of violent extremists, to offset the cost of their cloud provider bill,” Aliapoulios said.

But in the long-term, Parler may well survive given its existing popularity. Aliapoulios noted that other controversial sites like 8kun and Gab are still around. In fact, Gab said it was seeing a surge in demand over the weekend as other social media sites cracked down.

Tesla stock price slips after regulators ask for a recall of...

Investors Diurnal Team - January 14, 2021 0
According to regulators, the faulty media control unit (MCU) presents a safety concern Model S sedans (produced between 2012 and 2018) and Model X SUVs (2016 and 2018) are affected Shares of the electric car maker rose nearly 25% last week Shares of Tesla (NASDAQ: TSLA) are trading 1.2% lower today after the National Highway Traffic Safety Administration (NHTSA) issued a letter asking Tesla to recall around 158,000 vehicles due to safety concerns. Fundamental analysis: Safety issued determined After an investigation that took months to complete, the regulator determined that the faulty media control unit (MCU) presents a safety concern. The Administration noted that a faulty MCU has an impact on the backup camera and defogging and defrosting setting units. Are you looking for fast-news, hot-tips and market analysis? Sign-up for the Invezz newsletter, today. “As discussed more fully below, ODI has tentatively concluded that the failure of the media control unit (MCU) constitutes a defect related to motor vehicle safety. Accordingly, ODI requests that Tesla initiate a recall to notify all owners, purchasers, and dealers of the subject vehicles of this safety defect and provide a remedy, in accordance with the requirements of the National Traffic
Markets

Investors Diurnal Team - July 16, 2020 0
Get To Know Investment Risks and Avoid Scams It is ideal these days to invest your money for future endeavors and plans; it also ensures...
Markets

DPW Holdings Announces that It Has Complied with All Requirements of...