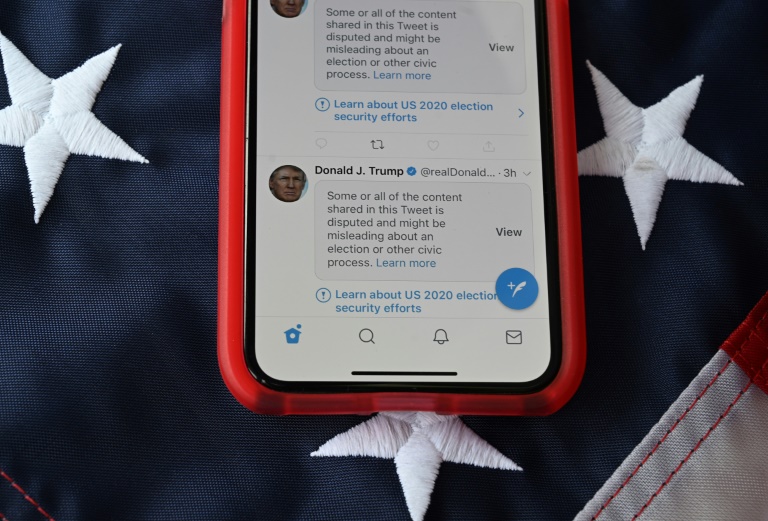 A mobile phone displays a post from Donald Trump masked with warnings imposed by Twitter, the president’s go-to communication tool.

SAN FRANCISCO: When US President Donald Trump departs the White House, he also leaves behind any immunity he might have from social media rules.

Efforts by Twitter and Facebook to balance letting political leaders speak to the people unfettered with enforcing rules about hateful and misleading posts have afforded Trump leeway not given to regular users.

But any special treatment that Trump has enjoyed ends with his presidency.

“Twitter’s approach to world leaders, candidates and public officials is based on the principle that people should be able to choose to see what their leaders are saying with clear context,” a spokesman for Trump’s go-to messaging platform told AFP.

“This policy framework applies to current world leaders and candidates for office, and not private citizens when they no longer hold these positions.”

So, Trump posts masked by warnings or amended with labels could qualify to be deleted instead.

“I assume that the argument around not completely removing content from world leaders is because what they say is important for us to know,” said Casey Fiesler, a professor at the University of Colorado, Boulder.

“I don’t know that I would describe that as leniency. But it’s certainly a different way that their policy is applied.”

Twitter says accounts of world leaders are not completely above its removal policies, particularly when it comes to promoting terrorism, threats of violence or publicly posting personal information about people such as where they live.

The fact that Trump has relentlessly attempted to undermine the integrity of the election and falsely claim victory is important for US citizens to know, academics reason, while acknowledging that his words in themselves represent a threat to democracy.

“You have to weigh those two things,” Fiesler said. “Arguably, Twitter could have removed his account long ago.”

Facebook has been under pressure to clamp down on political misinformation since failing to stop foreign influence campaigns in the 2016 US election — while at the same time remaining an open platform for debate.

The social network took a different path from Twitter, which early this year decided to label comments by Trump as misleading and in another case to limit the reach of the president’s comments for violating the platform’s policy on promoting violence.

Facebook chief executive Mark Zuckerberg has consistently resisted setting limits on Trump rhetoric, saying that “the best way to hold politicians accountable is through voting, and I believe we should trust voters to make judgments for themselves.”

Given the vitriol common in Trump posts, once he loses his protected status in social media as president he could wind up persona non grata, reasoned University of California, Berkeley, information school professor Hany Farid.

Twitter said Friday it had banned an account created by former Trump advisor Steve Bannon that called for the execution of federal officials.

The @WarRoomPandemic account was “permanently suspended for violating the Twitter Rules, specifically our policy on the glorification of violence,” a statement from the social media platform said.

Before the account was blocked, it featured a call by Bannon to remove the heads of FBI director Christopher Wray and top government pandemic expert Anthony Fauci.

If an ex-president Trump calls for violence in Facebook or Twitter posts, he too should be banned for life, Farid argued,

Establishment Media’s Real Concern: How Did Trump Manage to Do So Well?

Investors Diurnal Team - October 1, 2020 0
A Google sign is shown at one of the company's office complexes in Irvine, California, on July 27, 2020. (Reuters photo) BRUSSELS: Alphabet's Google plans to pay $1 billion to publishers globally for their news over the next three years, according to its chief executive officer, a step that could help it win over a powerful group amid heightened regulatory scrutiny worldwide. News publishers have long fought the world's most popular internet search engine for compensation for using their content, with European media groups leading the charge. CEO Sundar Pichai said the new product called Google News Showcase would launch first in Germany, where it has signed up German newspapers including Der Spiegel, Stern, Die Zeit, and in Brazil with Folha de S.Paulo, Band and Infobae. It will be rolled out in Belgium, India, the Netherlands and other countries. About 200 publishers in Argentina, Australia, Britain, Brazil, Canada and Germany have signed up to
Industries

Investors Diurnal Team - October 29, 2020 0
Comcast’s revenue from all three business segments tops analysts’ estimates in Q3. The U.S. firm reports £19.78 billion of revenue and 50.37 pence of adjusted EPS. Comcast forecasts its theme-park segment to break even before the start of 2022. Comcast Corp. (NASDAQ: CMCSA) said on Thursday that its revenue from all three business segments came in higher than expected in the fiscal third quarter. The American telecommunications conglomerate had also topped Wall Street estimates in the prior quarter (Q2). Cable communications and high-speed internet, Comcast said, added 556 thousand and 633 thousand new customers in the third quarter, respectively. Total video subscribers, on the other hand, reduced to 273 thousand. Earlier in October, Comcast announced RISE initiative that aims to strengthen Black-owned business. Are you looking for fast-news, hot-tips and market analysis? Sign-up for the Invezz newsletter, today. Comcast’s Q3 financial results versus analysts’ estimates According to FactSet, experts had forecast the telecommunications conglomerate to print £19.17 billion of total revenue in the fiscal third quarter. Their estimate for per-share earnings was capped at 40.29 pence. In its report on Thursday, Comcast topped both estimates posting a higher £19.78 billion of revenue and 50.37 pence of adjusted earnings