Jack Ma is getting a lesson about who is in charge.

The extraordinary regulatory action, according to Chinese officials and others with knowledge of the process, caps a monthslong tug of war between Mr. Ma, the billionaire co-founder of both Alibaba and Ant, and top regulators led by Vice Premier Liu He, President Xi Jinping’s point man on economic and financial policies.

It is hard to overstate the importance in China of Mr. Ma and his two companies. They have become synonymous to innovation. The media in China, using Mr. Ma’s Chinese name, calls the country’s rising tech sector, “The era of Ma Yun.” Mr. Ma’s criticism of regulators last week for stifling innovation appears to have brought his feud with the government to a head at a risky time for Ant.

For Mr. Liu and his financial regulators, Ant’s business model represents big risks that must be reined in. When it halted Ant’s IPO on Tuesday, the Shanghai Stock Exchange said it was because of a “significant change” in the regulatory environment, without elaborating. 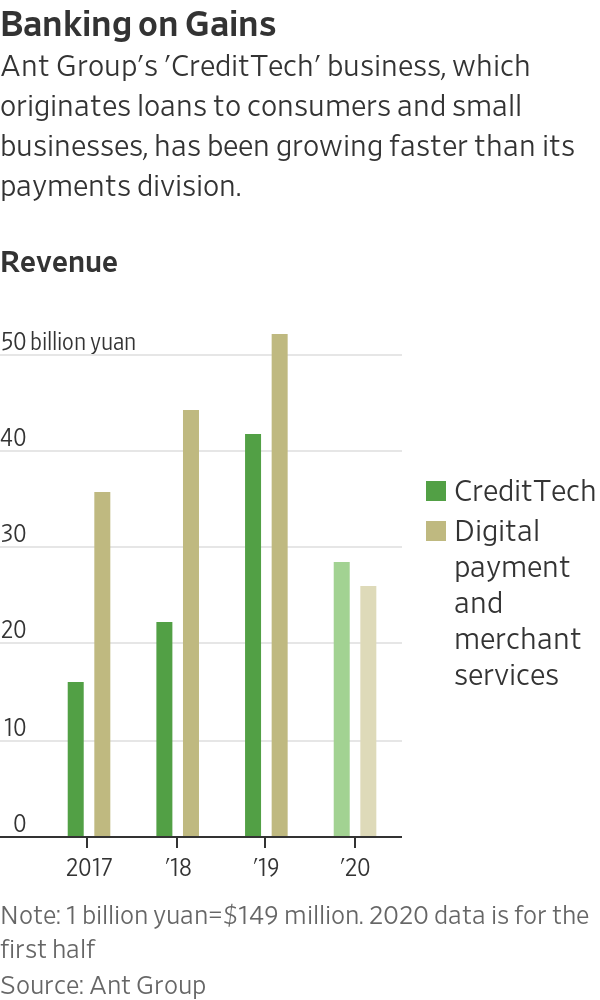 In a statement on Chinese social media, Ant said: “We will overcome the challenges and live up to the trust on the principles of: stable innovation; embrace of regulation; service to the real economy; and win-win cooperation.” Ant was on track to raise at least $34.4 billion in the IPO, valuing it at more than $300 billion. The U.S.-listed shares of Alibaba, which owns about a third of Ant, fell more than 8%, which would be its second worst day since its 2014 IPO.

The risk that Ant poses to the financial system is that it acts like a financial institution but isn’t regulated like one. Ant runs China’s ubiquitous payment app, Alipay, and facilitates investments for its customers’ savings, sells insurance and originates short-term loans. Ant provides just a small amount of the money it lends. The bulk of the funds come from more than 100 commercial banks that it has partnered with and from the sale of securities. Ant collects fees for facilitating the transactions.

However, that’s where regulators think the risks come in: Ant takes business away from traditional lenders and leaves them with the credit risk from both consumer and small-business loans. Big state-owned banks, traditionally a powerful lobbying force in China, also increasingly see Mr. Ma’s big-tech invention as a threat to their own businesses. They argue that Ant hasn’t been required to abide by the tough banking regulations on capital and leverage that they face. Under draft rules, Ant would be required to fund at least 30% of each loan it makes in conjunction with a bank or other financial institution. 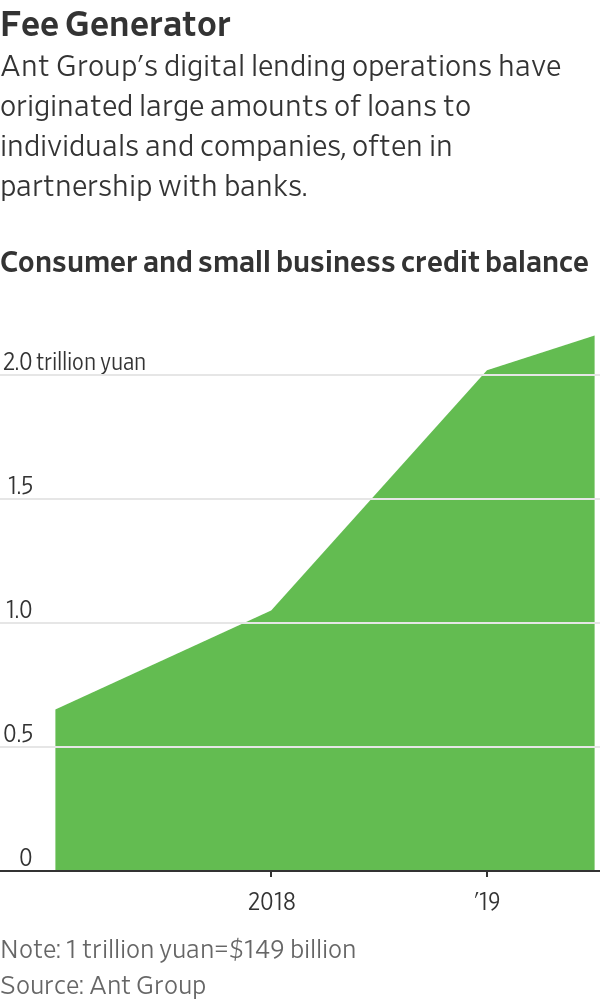 Mr. Liu, the Chinese leadership’s economic czar, has spent the past few years cracking down on private funds and other institutions that make loans outside the traditional lending channel. Those “shadow lenders” heightened risks in China’s financial system already struggling with too much debt. Having closed down many of those lenders, Mr. Liu and his regulators in recent months have shifted their focus to big fintech firms like Mr. Ma’s Ant.

While drafting new rules to potentially subject firms like Ant to more stringent capital and other regulatory requirements, Mr. Liu’s team didn’t want to choke off the kind of innovation being championed by such firms. The leadership under President Xi has made technological advances the core strategy for China’s development.

Wary of the potential for heightened regulatory scrutiny over companies like his, Mr. Ma lashed out. At a Shanghai conference late last month, he criticized regulators, both at home and abroad, for stifling innovation.

“We shouldn’t use the way to manage a train station to regulate an airport,” Mr. Ma said. “We cannot regulate the future with yesterday’s means.“

For Mr. Liu and his regulators, Mr. Ma’s comment, which went viral on China’s social media, amounted to a direct attack on them, the Chinese officials say. Shortly after his broadside, Mr. Liu emphasized at a weekend meeting with financial regulators the need for fintech firms to be regulated. Then, on Monday, Mr. Ma and a couple of executives from Ant were summoned to a rare joint meeting with China’s central bank and three other top financial regulatory agencies. 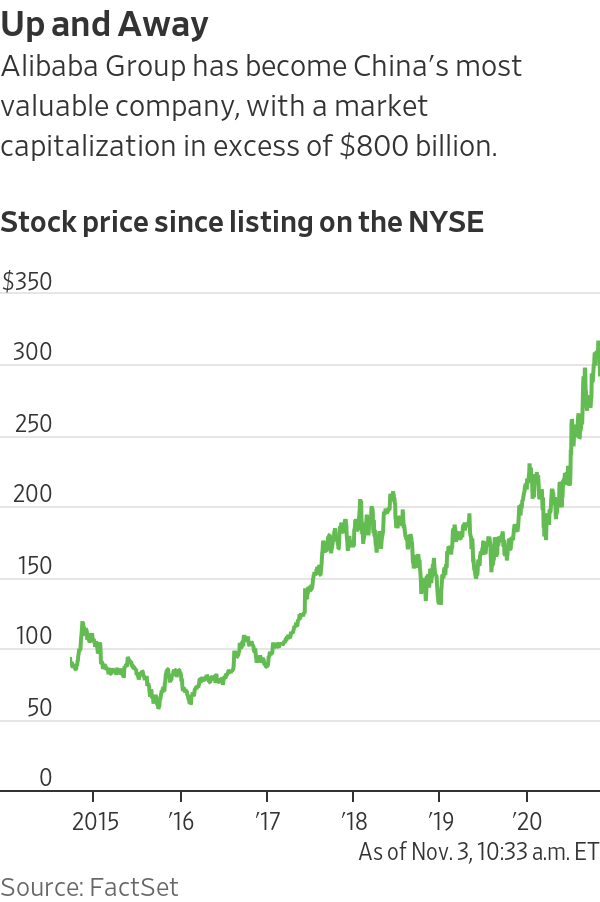 “It’s more than a dressing-down session,” said one of the officials with knowledge of the event. Mr. Ma and his team were informed of the new regulations targeting firms like Ant. “It means the company would have to examine how they disclose information to its investors, whether it has adequate capital level to meet the new rules, and whether it should adjust its overall business scope.”

Already, regulators have been concerned about the frenzy over Ant’s planned IPO. The stock sale would have valued Ant at more than the likes of
JPMorgan Chase
& Co. and
Goldman Sachs Group.

By making Ant more like a bank, regulators could stifle its growth, reduce its profitability and shrink the company’s valuation. Banks are typically valued much lower than tech companies.

China’s state media also chimed in. An article posted on the official People’s Daily website Monday bore the title “There is no so-called era of Ma Yu; Ma Yun is only part of the era.” Other state-owned newspapers called Ant out for having promoted too much of a consumer culture in China.

The episode harked back to how the Chinese government previously called out Alibaba for not reining in illegal activities on the e-commerce company’s websites.

In the summer of 2014, two months before Alibaba’s New York IPO, officials from a top Chinese business regulator went to the company’s Hangzhou headquarters and urged it to clean up sales of fake merchandise and protect customers on Taobao, its popular online marketplace. The episode became public in early 2015, only after Alibaba had finished raising $25 billion and its shares had started trading. Mr. Ma was Alibaba’s executive chairman at the time, and the company engaged in a rare public spat with the authorities. Alibaba eventually revamped its approach to dealing with fake goods.

Regulators are “very aware of the power and influence that Ant and Alipay have” in China, said Chris Skinner, an independent commentator who follows the fintech industry closely and wrote a book called “Digital Human” that included a case study about Ant. “But how do you control a beast that’s so big now?” he said, adding that the challenge is how to align the company’s objectives with regulators’ wishes.

The latest salvo from financial regulators reflects how “Ant Group is still more of a financing firm than a tech company,” said Winston Ma, the former head of North America for China Investment Corp., the country’s sovereign-wealth fund.

—Xie Yu contributed to this article.

Write to Lingling Wei at lingling.wei@wsj.com and Jing Yang at Jing.Yang@wsj.com