Ant Group has grown into a giant creature, but it still isn’t top of the food chain in China, a fact that the company and legions of eager new investors were forced to confront anew on Tuesday.

The Chinese financial-technology company, an affiliate of e-commerce giant Alibaba, was forced by regulators to suspend its concurrent initial public offerings in Shanghai and Hong Kong just two days before the record $34 billion listings. The company cited “recent changes in the fintech regulatory environment” as one of the reasons for the sudden pause.

Ant would have been valued above $300 billion, but that massive valuation was based on what were, in retrospect, rosy assumptions about Ant’s ability to keep bucking the trend of tighter financial regulation in China, which has been readily evident since at least 2017. Investors also ignored warning signs over the past several weeks about regulators’ discomfort. 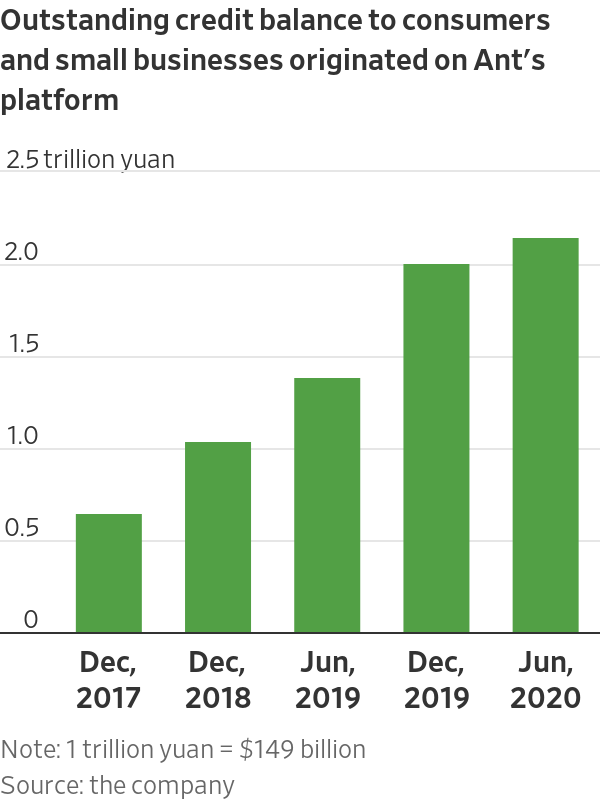 Ant has portrayed itself as a technology company, rather than a financial institution, partly to avoid the scrutiny of regulators. The company has in recent years switched from being primarily a direct provider of financial services to being an online platform for these services—precisely because being an online lender had become a hazardous business from a regulatory-risk perspective.

But the latest debacle shows that such attempts to dodge and weave may be futile when Ant itself has grown to be such an important player in China’s financial system: It has the equivalent of $321 billion in credit balance outstanding to consumers and small businesses, for example. The speech by Jack Ma, Ant’s controlling shareholder, last week criticizing the regulators for stifling innovation hinted at the tensions. Mr. Ma and other Ant executives were summoned by the regulators Monday.

And new rules are coming. Under draft rules released Monday, online microloan companies like Ant could be required to fund at least 30% of each loan it originates together with a bank or other financial institution. That means Ant will have to put up more of its own capital—it now keeps only 2% of the loans originated on its platform, while the rest are either underwritten by banks or securitized. The actual amount still depends on the implementation of the final rules.

New regulations like these could make Ant more like a bank. But Ant is valued more like a tech company, partly because it could scale rapidly without taking too much risk onto its own balance sheet. Ant’s potential growth may now slow.

When Ant comes back to the market again—and there are no indications when that will happen—investors are unlikely to be so sanguine about regulatory risks. And that means a future Ant will likely be valued more like the hybrid tech and financial firm it really is, rather than just a tech darling.

Investors Diurnal Team - November 16, 2020 0
WASHINGTON — A financial market meltdown in March highlighted weaknesses that still pose a threat to global financial stability, indicating the need for reform, a global body that monitors financial risks said on Monday.“The March turmoil underscores the need to strengthen the resilience” among firms that are not formally banks but serve as important market go-betweens, the Financial Stability Board said in a report. The group, which includes officials from the United States, noted that “the financial system remains vulnerable to another liquidity strain, as the underlying structures and mechanisms that gave rise to the turmoil are still in place.”In March, rapid trading in Treasury bonds evaporated as panic over the coronavirus pandemic gripped global markets, imperiling the core of the financial system. The new report may be the most comprehensive analysis yet of what exactly happened.Randal K. Quarles, president of the F.S.B. and the Federal Reserve’s vice chair for supervision, noted in a letter accompanying the report that the March disruptions raised questions about the role played by investors who use a lot of leverage and about the willingness and capacity of key banks to keep trading flowing smoothly in troubled times.The report noted that fragile spots had arisen
Economy

Investors Diurnal Team - November 6, 2020 0
The American economy continues to heal from the devastating effects of the first wave of the coronavirus pandemic last spring, but a new wave of cases threatens prospects for sustained growth.The Labor Department reported Friday that employers added 638,000 jobs in October, a figure that would have been larger without a drop in temporary census workers.But the engines behind much of the gain — bars and restaurants, which added 192,000 jobs, and retailing, which picked up 104,000 — represent some of the jobs most at risk from a resurgence in coronavirus cases.Public health experts have linked a return to indoor dining and drinking establishments with increased cases of Covid-19, and those businesses face renewed restrictions as the outbreak worsens. Cooler temperatures are already curtailing outdoor dining, a lifeline for restaurants in many parts of the country.Similarly, if apprehensive consumers stay away from shopping centers, retail hiring could be curtailed as the year-end shopping season approaches.Job openings have been weaker than expected as retailers gear up for the holidays, according to Daniel Zhao, senior economist at the jobs site Glassdoor. “This could point to more muted spending and hiring,” he said. And despite the recent gains, employment in the leisure and
Economy