Apple Inc.
was always going to need to buy its way out of its App Store jam. The question is whether its opening bid will suffice.

The company said Wednesday that it will sharply cut the commission it takes on smaller apps distributed through its App Store. For developers generating $1 million or less in annual revenue from their apps on the store, Apple’s cut will be 15% instead of the 30% that has largely been in place since the App Store began in 2008. The $1 million cutoff is based on the developers’ revenue after Apple’s commission.

Apple didn’t detail the financial impact from the decision. The move will take effect on Jan. 1, after the end of the company’s current fiscal first quarter. Apple hasn’t been issuing its typical quarter-ahead forecast anyway, due to the uncertainty caused by the coronavirus pandemic. The company has tweaked its fee structure before, most notably in 2016 when it cut its take to 15% for subscriptions renewed after their first year. 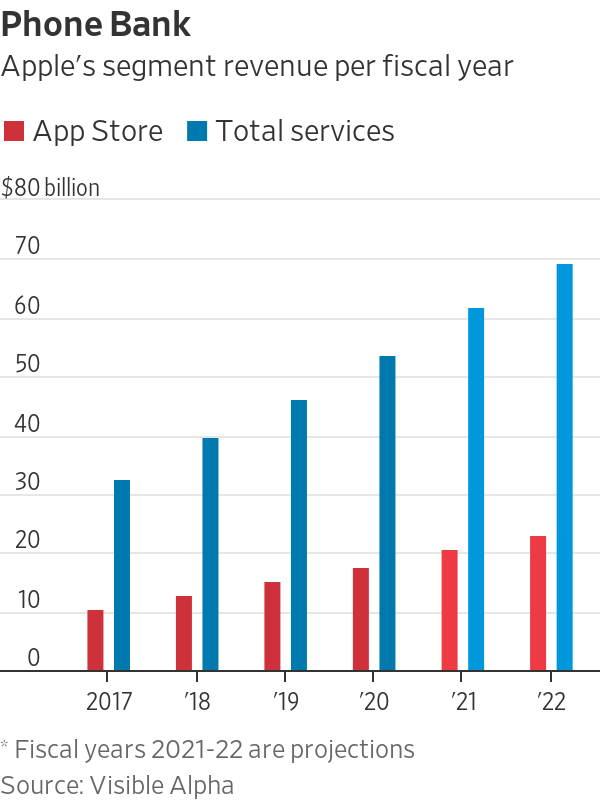 But the App Store is a major business segment for the company, acting as the top driver of growth for its services revenue over the past two fiscal years, according to Apple’s regulatory filings. Analysts estimate the App Store generated $17.8 billion in revenue for Apple in the fiscal year ended Sept. 26. And that it will surpass $20 billion this year, according to Visible Alpha. That would represent about one-third of Apple’s total service revenue in those periods. The bottom line impact is even bigger: Apple’s service revenue generated gross margins 35 percentage points higher than its product side for the most recent year.

That could be the fly in the ointment. Large developers have been the ones making the most noise about Apple’s market power, thus driving the antitrust scrutiny the company is receiving on both sides of the Atlantic. Epic Games Chief Executive Tim Sweeney, whose company is suing Apple over its App Store fees, called the action “a calculated move by Apple to divide app creators” and said consumers “will still pay inflated prices marked up by the Apple tax.”

Apple may have to make some of its larger taxpayers happy if it wants to quell the riot.

Apple’s stock-market value hit a new record this year, but its longstanding disputes with app developers are bubbling over into public view. WSJ explains why high-profile companies like Epic Games, Spotify and Tinder are at odds with App Store rules. Video/illustration: Jaden Urbi/WSJ (Originally published Oct. 1, 2020)

In latest China jab, US drafts list of 89 firms with military ties

Trump to cut troop levels in Afghanistan, but stops short of full withdrawal

Foreign Meat Is Dropping Off the Menu in China as Local...