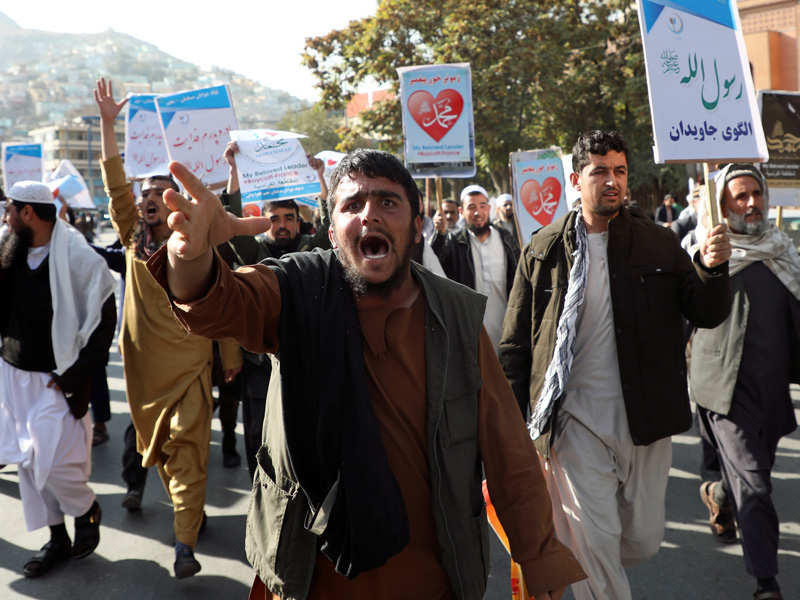 Thousands of Muslims in Pakistan poured out of prayer services to join anti-France protests on Friday, as the French president’s vow to protect the right to caricature the Prophet Muhammad continues to roil the Muslim world.

Mute buttons, Lincoln and a watch: 6 takeaways from the Trump-Biden presidential debate

Why the rocky engagement between Tiffany and LVMH might survive

Newtek CEO, Barry Sloane, to Host Webinar to Discuss the Future of Payroll and...

Investors Diurnal Team - October 22, 2020 0
LONDON: Britain on Thursday said it would partner with an Oxford-based firm to provide testing for the T cell response of coronavirus vaccine candidates to try to assess their immune responses.T cell immunity is thought to be essential to protection against infection from the SARS-COV-2 coronavirus, and could provide longer term immunity than antibodies.The UK Vaccine Taskforce has chosen Oxford Immunotec to supply T cell testing for its assessment of different vaccine candidates."It is important to be able to assess the different vaccines head-to-head and the T cell response is part of our portfolio of accredited assays that we are employing for cross comparisons," Kate Bingham, chair of the UK Vaccines Taskforce, said in a statement.Britain has signed supply deals for six different coronavirus vaccine candidates, including those being made by AstraZeneca and Pfizer and BioNTech, seen as among the frontrunners in the race for a vaccine.Oxford Immunotec said its techonology platform enabled the centralisation of fresh blood samples from different locations to measure the T cell response in a standardised way.It said the platform, known as T-SPOT, was being used to identify the T cells made in response to the pathogen that causes tuberculosis.
World News

Investors Diurnal Team - October 29, 2020 0
TAIPEI: A Taiwanese pilot was killed Thursday after his fighter jet crashed off the island's eastern coast during routine training, the air force said, in the second fatal air crash in three months.Pilot Chu Kuang-meng ejected from the F-5E jet after reporting an engine malfunction shortly after take-off, the air force said.The 29-year-old was rescued from the sea unconscious but could not be revived.The crash comes as Taiwan's aged and under-equipped air force is forced to meet an unprecedented level of incursions into its defence zone by Chinese fighters.The island says it has scrambled its fighters at double the rate of last year in an effort to warn off Chinese jets.Beijing views self-ruled democratic Taiwan as its own territory and has vowed to one day seize it back, by force if necessary.Analysts say China's increased buzzing of Taiwan is a way to test the island's defence responses, but also wear out its fighters.The F-5E is an older generation fighter with a design that dates back to the 1960s.Air force chief of staff Huang Chih-wei told reporters that all F-5 fighters have been grounded for safety checks since the crash.In July, two crew members were killed in a helicopter crash as
World News

US approves $1 billion in new arms sales to Taiwan

Investors Diurnal Team - October 22, 2020 0
WASHINGTON: The US government announced approval Wednesday to sell $1 billion worth of advanced air-to-ground missiles to Taiwan as the island shores up its defenses against the threat from China.The State Department said it had agreed to sell 135 of the AGM-84H SLAM-ER missiles, precision-guided, air-launched cruise missiles, and related equipment.Also approved was the sale of six MS-110 reconnaissance pods for air reconnaissance, and 11 M142 mobile light rocket launchers, taking the value of three arms packages to $1.8 billion.The SLAM-ER missiles will help Taiwan "meet current and future threats as it provides all-weather, day and night, precision attack capabilities against both moving and stationary targets" on the ground or ocean surface, a statement said.China, which regards Taiwan as a renegade province, has stepped up pressure toward the island over the past year, sending attack and surveillance aircraft into its airspace and ships near its waters.Last week Beijing released video of a military exercise simulating an invasion of a Taiwan-like territory featuring missile strikes and amphibious landings.While Taiwan has for decades fallen back on an implicit US security guarantee, Washington has urged it to strengthen its own capabilities to resist an attack.But Washington also wants Taiwan to upgrade its armaments."Whether