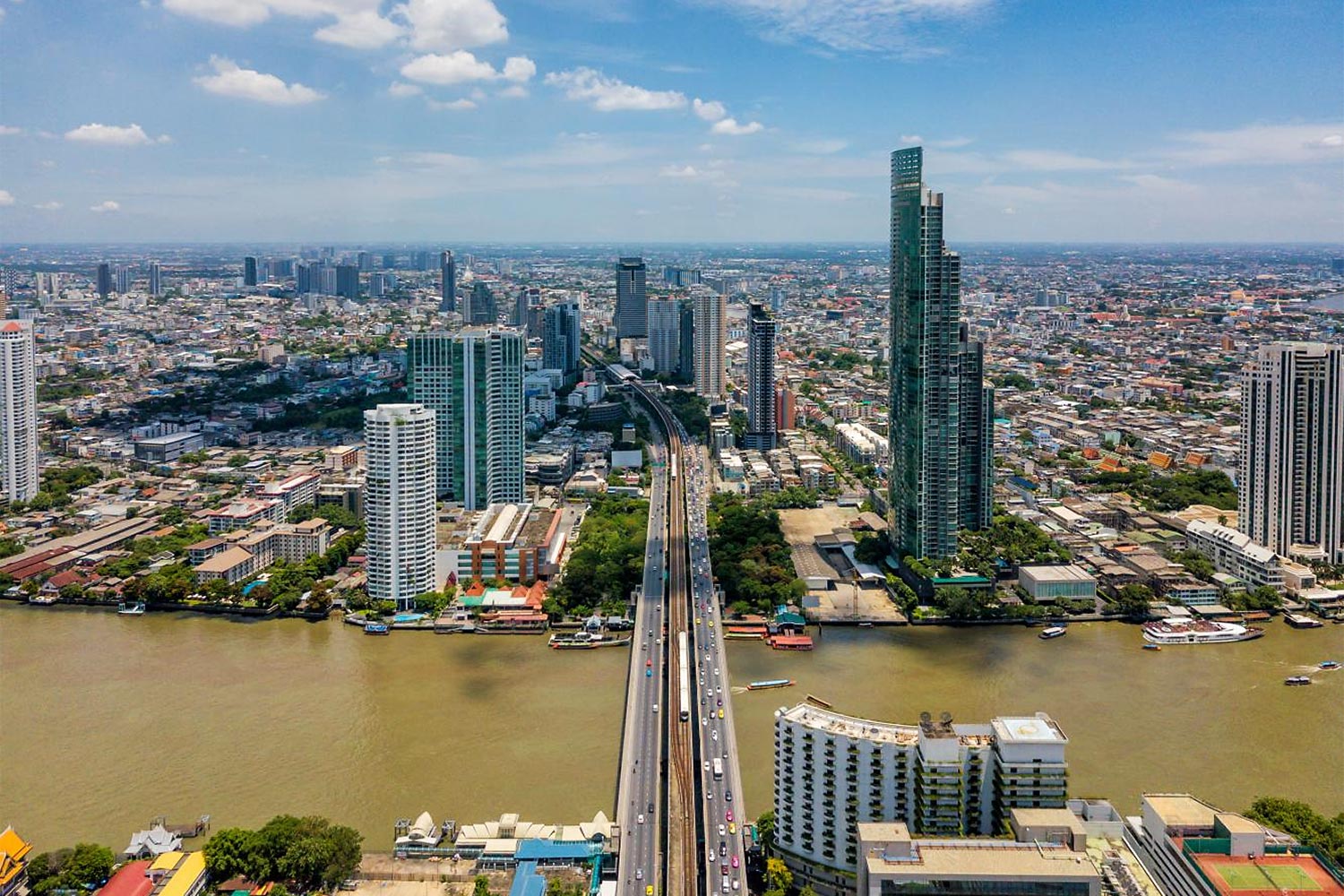 Residential developers are accelerating business adjustment and new strategies to cope with a property market slowdown and an economic downturn due to the pandemic which is expected to last until next year.

The new black swan of the global economy leading to the worst recession in Thailand in over two decades is a negative factor that will worsen the weak property market, in addition to the lending curbs imposed last year. 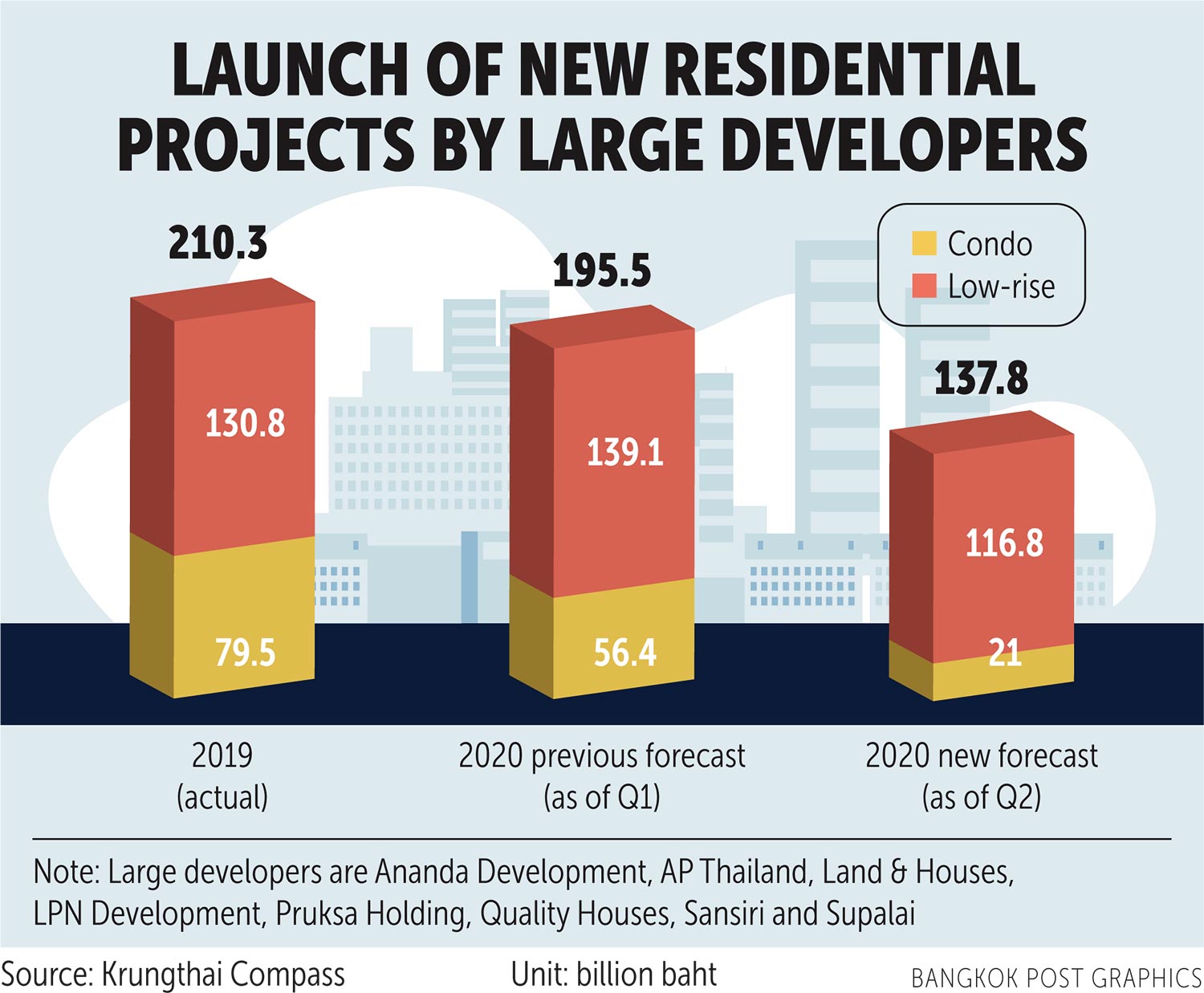 Supattra Paopiamsap, former deputy group chief executive for Pruksa, said market sentiment in May and June recovered from March and April with a higher number of customers visiting project sites.

“Despite an unlively pre-virus market, it bottomed out in the second quarter,” she said. “We will stay conservative and keep monitoring the recovery in the second half.”

Pruksa was among many developers that revised down the number of new residential project launches this year and delayed them to 2021.

It slashed down to 12 projects worth a combined 15 billion baht from 30 worth 36 billion baht planned earlier in the year. Most of them were condos as opening new sites amid lower purchasing power may cause unnecessary expenses.

Noble Development mulled postponing the launch of two new high-priced condo projects worth a total 15 billion baht to the first quarter next year from the fourth quarter of 2020.

According to Krungthai Compass, one-third of new residential supply scheduled to launch this year by listed developers was delayed to next year.

The earlier planned prior to the pandemic worth a total 195.5 billion baht was reduced to 137.8 billion baht in the second quarter, a decrease of 35% from 2019.

Condos saw the largest decline, plunging 63% to only 21 billion baht while the low-rise segment was cut by just 16% to 116.8 billion baht.

“With the same price level, low-rise houses have a larger space than condos despite the greater travel distance,” he said.

After cutting the number of new projects being launched this year, Pruksa in the second half will re-market 19 highlight projects launched last year which had a take-up rate of more than 50%.

Most of them are low-rise houses not far from a mass transit station priced 2-3 million baht a unit for a townhouse and 5 million baht for a single detached house.

Tritecha Tangmatitham, managing director of Supalai Plc, said the company delayed launching some new condo projects to next year and replaced them with low-rise houses. 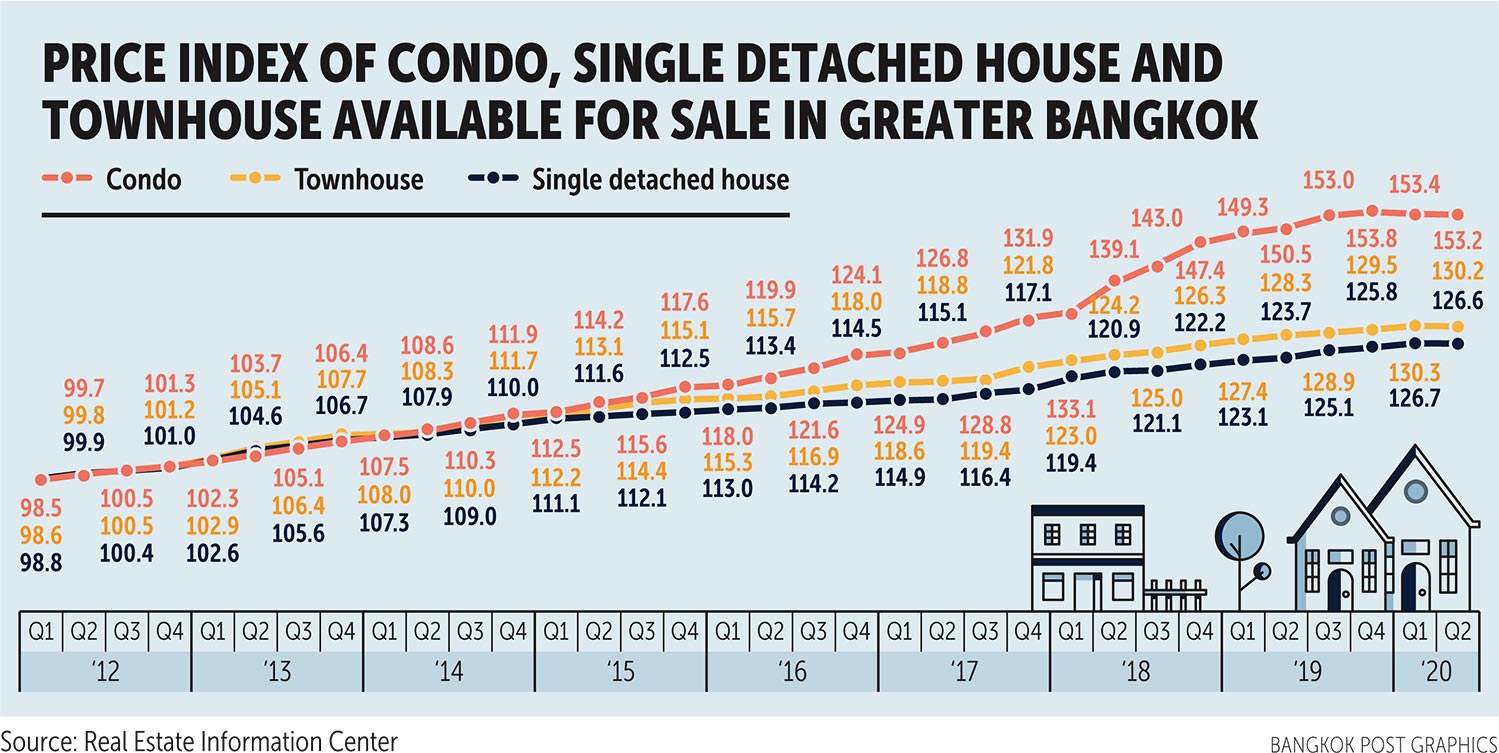 “Low-rise housing market has improved since May after the lockdown restrictions eased. The positive momentum will continue through to the end of the year,” he said.

He said some buyers want to avoid density in condos.

Pamorn Prasertsan, chief of business group for townhouses at AP Thailand, said the low-rise market is from real demand. Many customers shopped around for condo units but decided to buy a townhouse instead.

Both Supalai and AP reported revenue and presales from low-rise houses outperformed those for condos in the first half.

Supalai’s presales portion from low-rise houses rose to 63% from 56% in the same period last year with a year-on-year growth of 21% while condo presales dropped by half.

In May, presales from low-rise houses posted the monthly highest in the company’s history due to pent-up demand in March and April.

Meanwhile, AP’s presales in the first seven months was driven by low-rise houses which accounted for 85% of the total. Low-rise’s year-on-year growth was 11%.

Chanond Ruangkritya, president and chief executive of Ananda Development, said the company was restructuring its low-rise housing business portfolio to put more weight on the segment.

“We aim to boost low-rise sales to 20-30% of the total from 10% at present as low-rise housing market is robust,” said Mr Chanond.

Mrs Supattra of Pruksa Holding said the company will introduce precast concrete to other developers so that its factories can generate an income from the outside.

Pruksa will also tap the Chinese buyer market in the fourth quarter through agents based in China to seize strong demand for Thai properties among them.

It also offered some plots of land for sale which were earlier slated to develop condo and low-rise projects.

Sansiri was another firm that announced a land lease or sale for a plot sized seven rai near Talat Phlu BTS station where it earlier planned to develop a condo project with more than 1,500 units.

Overseas investments are alternative sources of income for many developers, including Land & Houses and SC Asset Corporation which invested in US apartments.

Noble Development plans to acquire residential units in the UK to resell to Thai and other Asian buyers, while Supalai went for residential development in Australia, Malaysia, Vietnam and the Philippines via shareholding.

“The Thai property market went through the 1997 Asian financial crash, political unrest and the 2008 financial crisis very well. Prices could resume after a fall,” she said.

However, tourism accounts for 15-20% of Thai GDP. If tourism does not come back, the economy will need a longer time to revive, subject to progress on a vaccine.

“Some 10 million people have been affected by the Covid-19, in terms of layoffs and salary cuts,” Supalai’s chairman Prateep Tangmatitham said. “The government should reopen to international tourists, otherwise the economy will crash in the fourth quarter.”

China all set to change its development model from 2021: Xi

Do Junk Bonds Pay Off in the Long Term?

Investors Diurnal Team - November 23, 2020 0
Sirius Real Estate’s pre-tax profit slides to £55.22 million in fiscal H1. The property company raises its dividend to 1.62 pence per share. Sirius saw a 10% annualised growth in revenue to £70.40 million in H1. Sirius Real Estate Ltd. (LON: SRE) said on Monday that its pre-tax profit in the fiscal first half came in lower than last year. The company, however, expressed confidence that its revenue remained robust in recent months, on the back of which, it raised its dividend on Monday. Sirius Real Estate opened about 3.5% up on Monday and gained another 1% in the next hour. On a year to date basis, it is now close to 3% down in the stock market but has recovered roughly 90% since late March, when COVID-19 disruptions had weighed heavily on its stock. Are you looking for fast-news, hot-tips and market analysis? Sign-up for the Invezz newsletter, today. Sirius Real Estate raises its dividend to 1.62 pence per share The company that primarily invests in German business parks said that its pre-tax profit in the six months that concluded on 30th September printed at £55.22 million. In comparison, its profit in the same period last year
Real Estate

The lowdown on low rates

Investors Diurnal Team - October 29, 2020 0
Lower prices at residential projects and attractive interest rates for housing loans are supporting healthy mortgage loan growth amid the Covid-19 pandemic, with the positive trend mainly deriving from real demand. The Bank of Thailand announced second-quarter housing loan growth in the overall commercial banking system of 4.4% year-on-year. Housing loans were a key segment contributing to a second-quarter consumer loan expansion in the commercial banking sector of 4.8%, albeit a slower pace than 5.6% in the previous quarter. Housing loans classified as Stage 3 under the new accounting standard, Thai Financial Reporting Standards 9 (TFRS 9), or non-performing loans (NPLs), came in at 4.04% in the second quarter, unchanged from the first quarter, mainly due to the central bank's debt relief measures, especially the debt holiday policy. But the bad-debt ratio of this loan segment continued to increase from 3.23% in 2017, 3.25% in 2018 and 3.71% in 2019, owing to the new standard. Meanwhile, Stage 2 housing loans under TFRS 9, falling under the heading of special mention (SM) loans, were 6.03% in the second quarter, down from 6.65% in the first quarter. They are up sharply from 1.91% in 2017,