Biogen’s
chances are fading to soon have the best sales opportunity for the drug industry in many years, as a messy approval process for a would-be blockbuster drug somehow just got messier.

The company’s hopes to win regulatory approval for its experimental Alzheimer’s disease drug aducanumab took a major hit on Friday: An independent committee of outside experts assembled by the Food and Drug Administration to review the drug’s merits voted overwhelmingly that even the best available clinical data doesn’t show the drug to be effective. Several panelists had criticism of both the drug’s merits and the interpretation of data by FDA scientists.

The recommendations of outside advisory committees are nonbinding, but the FDA usually follows them. Biogen shares, which rose 44% last Wednesday after positive comments from FDA officials, are likely to take a beating when trading opens on Monday. 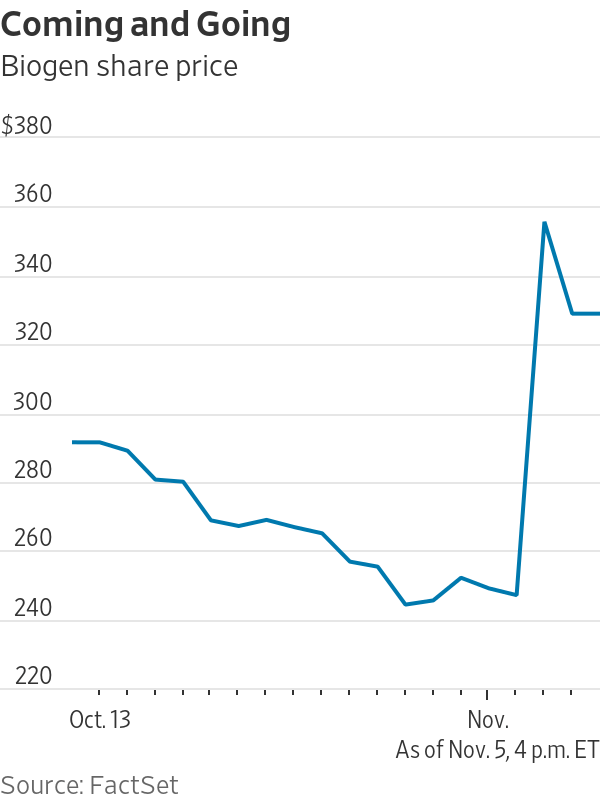 Aducanumab had a wild history even before last week’s events: Biogen and its partner Eisai terminated two late-stage studies in March 2019 after an analysis determined there was less than a 20% chance the drug would succeed in slowing study patients’ cognitive decline. Later that year, the company said subsequent analyses showed that one of the studies was successful and that the other had likely failed because of changes the company made to the study design halfway through the trial.

There is still a real possibility that the FDA will approve the drug by its final decision date in early March. After all, regulators have shown a willingness to be flexible in approving new drugs for otherwise unmet medical needs, and the agency itself said in briefing documents for Friday’s meeting that the need for Alzheimer’s treatments is enormous. The agency also said it found one of Biogen’s clinical trials to be “highly persuasive.”

One possible compromise, for instance, could be to approve the drug for sale but also require Biogen to run another trial.

But even in that scenario, the commercial prospects of aducanumab have likely taken a sizable hit. Even if Biogen can persuade regulators, convincing large insurance companies to pay for aducanumab is another battle altogether.

A public finding by outside experts that the drug hasn’t been shown to work means significantly less bargaining power for Biogen, and, ultimately, a less attractive business opportunity. Analysts at Truist Securities have forecast peak annual sales of about $7.3 billion for the drug, but that depends on persuading payers that the drug is worth the money.

Meanwhile, Biogen’s existing business is unlikely to excite investors soon. Its bestselling multiple-sclerosis drug Tecfidera faces competition from several cheap generic drugs. Total revenue fell 6% from a year earlier in the third quarter and Biogen lowered its full-year sales and profit outlook. The company at the same time authorized a fresh $5 billion in share repurchases, and if aducanumab doesn’t reach the market, it could turn to buying smaller biotech companies.

But that wouldn’t pack anywhere near the same punch as a breakthrough treatment for a tragically widespread disease. Biogen’s story might have just gotten a lot less exciting.

On Liberty and Thanksgiving

Qualcomm, Apple, Paypal, Zynga: What to Watch When the Stock Market...

Investors Diurnal Team - November 30, 2020 0
S&P Global Inc. (NYSE: SPGI) said on Monday that it will buy IHS Markit Ltd (NYSE: INFO) for £32.97 billion. The all-stock deal will mark the largest corporate acquisition this year. The two companies were negotiating the mega-deal for the past few months. Following approval from antitrust regulators, the deal is expected to close next year in the second half. CEO Lance Uggla of IHS Markit commented on the news on Monday and said: Are you looking for fast-news, hot-tips and market analysis? Sign-up for the Invezz newsletter, today. “The next steps will be to receive regulatory approvals both in the U.S. and the EU, which we expect to take between six to nine months, and receive approval by our respective shareholders.” In a report published in late September, IHS Markit said its net income came in at £127.61 million in the fiscal third quarter. The mega-deal includes £3.60 billion of debt At the time of writing, IHS Markit is valued at £29.64 billion and has a price to earnings ratio of 43.51. Shares of the British financial information and services company are currently more than 30% up year to date in the stock market after a 120% recovery since