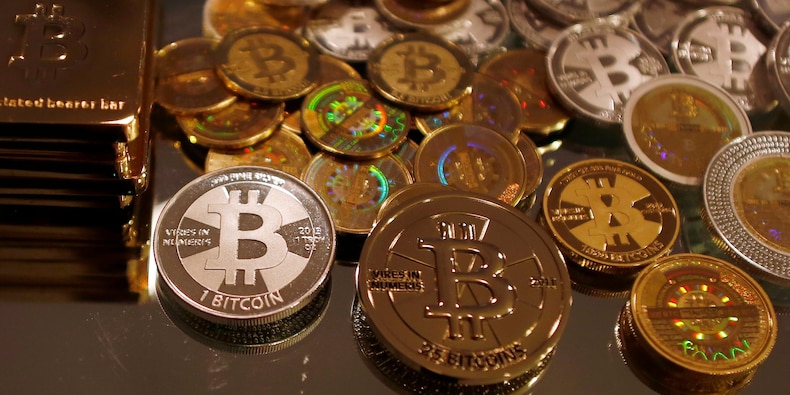 Bitcoins created by enthusiast Mike Caldwell are seen in a photo illustration at his office in Sandy, Utah, September 17, 2013.

Bitcoin set a new all-time high on Monday, trading above $19,700 for the first time in three years.

“The Bitcoin correction didn’t last long, with the cryptocurrency having sights set on new highs once again, with $20,000 the ultimate goal in the short-term,” said Craig Erlam, a senior market analyst at OANDA. “A move into uncharted territory and the psychological boost that would come with a move like this could propel Bitcoin aggressively higher.”

Amazon PS5 customers who got Nerf guns and air fryers instead...

Investors Diurnal Team - December 3, 2020 0
Business Insider Japan / 西田宗千佳Amazon UK customers who pre-ordered a PlayStation 5 for launch day but never received the in-demand console are now being offered a replacement. Some customers had said their orders never arrived, while others said they instead received cat food, a coffee machine, and a foot massager in place of their console. Some affected buyers have shared screenshots of emails offering them a new console, with delivery within 14 days. Amazon didn't say what happened to the missing consoles.  Visit Business Insider's homepage for more stories. Amazon UK customers whose PlayStation 5 pre-orders never arrived are now being offered replacement consoles. On November 19, the console's UK launch day, dozens of shoppers took to social media to say their PS5 consoles never arrived despite being marked as delivered by Amazon. Some said they instead received random products, including a coffee machine, a foot massager, and cat food. Amazon now appears to be shipping new consoles to some affected customers. Push Square journalist Anthony Dickens, who received a Nerf gun in place of a PS5, and freelance journalist Bex April May, who received an air fryer, per IGN, are among those who have now been offered a replacement. Dickens shared his email from Amazon on Twitter: —Anthony Dickens (@antdickens) December 2, 2020 Amazon didn't say what happened to the missing console, and simply referred to the delivery as "the order you didn't receive." Customers have to contact Amazon if they want to receive the replacement. They don't have to reorder the console, which is currently unavailable on Amazon UK after huge demand. In some cases, customers have already been refunded the £450 ($603) for the console — they would have to resubmit their payment. Amazon plans to dispatch the new console within 14 days of order confirmation. But some customers reportedly still haven't been offered replacements. One said that they were only offered a refund, and another who claimed they never received their order said they were told the replacements didn't apply to them. Read more: The power players of Microsoft's revitalized $11.6 billion gaming division, which is taking on Sony's PlayStation 5 with new Xbox consoles and cloud services The missing deliveries had frustrated many customers, who took to social media to share their grievances. Other sources of PS5s have been hard to come by. Many other retailers also sold out, and websites crashed because of the rush of visitors. In the US, some customers lined up outside GameStop stores for two days for a chance to buy a PS5 on Black Friday — but many still walked away empty-handed But resellers managed to cash in, some using bots to nab dozens of consoles and selling them for up to double their purchase price. Some resellers told Business Insider they got threats while trying to sell the consoles on Facebook Marketplace and Craigslist.
features

Investors Diurnal Team - November 17, 2020 0
S&P Dow Jones Indices to add Tesla its flagship S&P 500 index next month Tesla share price soared over 13% to $460 in after hours trading on Monday Bulls will now target a new record high above $502.49 Shares of the electric carmaker Tesla (NASDAQ: TSLA) soared over 13% in pre-open Tuesday on the announcement that the company is expected to join the S&P 500 next month.  Fundamental analysis: Tesla finally added to S&P 500 The news was announced by the S&P Dow Jones Indices which said that Tesla would join the S&P 500 index before the trading begins on December 21, likely in two tranches to make it easier for investment funds.  Are you looking for fast-news, hot-tips and market analysis? Sign-up for the Invezz newsletter, today. “(Tesla) will be one of the largest weight additions to the S&P 500 in the last decade, and consequently will generate one of the largest funding trades in S&P 500 history,” S&P Dow Jones Indices said. Tesla, which has a market cap of more than $400 billion will be one of the biggest additions to the S&P 500, bigger than 95% of the index’s current components.  S&P Dow
Markets

Investors Diurnal Team - December 3, 2020 0
Tesla head Elon Musk talks to the press as he arrives to to have a look at the construction site of the new Tesla Gigafactory near Berlin on...