The price of the digital currency has surged about 90% in 2020 and traded as high as $13,848 on Tuesday, according to CoinDesk. That is the highest level since January 2018, when bitcoin was coming down from its record high of $19,783 set in the previous month.

Many investors agree the renewed surge of interest is tied to bitcoin’s potential as a hedge against inflation.

Bitcoin’s proponents have touted that prospect for years, mainly because the bitcoin network has a set limit on the number of units that can be created: 21 million. With the coronavirus pandemic wracking economies across the globe, governments and central banks have been forced to spend trillions to prop up their economies while sapping the purchasing power of their currencies. That has revived fear that inflation will ramp up in the coming years, and that fear is winning bitcoin new converts. 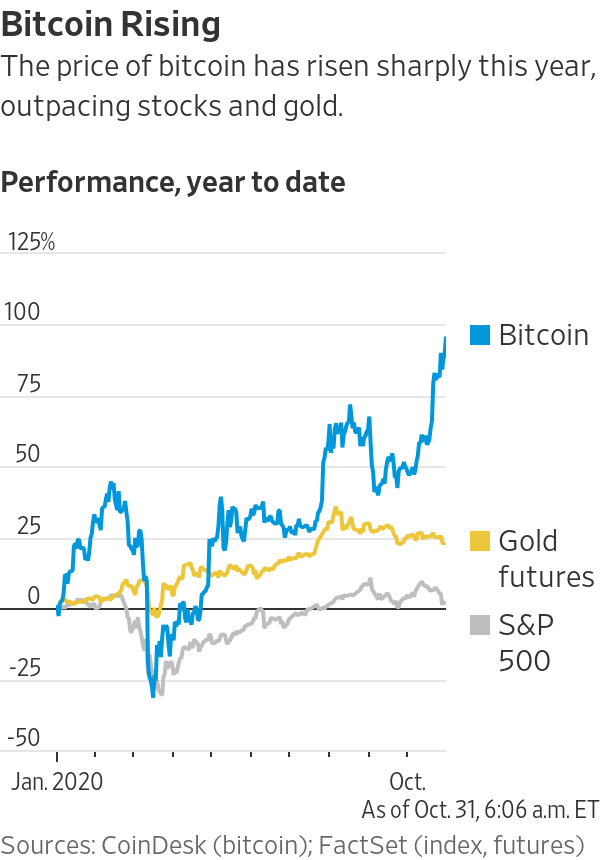 Some of them include publicly traded companies. Square Inc., which allows users to buy bitcoin on its Cash App, bought $50 million worth of the digital currency in October to use as a hedging instrument in its corporate treasury.

Virginia-based software provider
MicroStrategy Inc.
made a similar play earlier in the year, buying about $425 million of bitcoin to hold in its corporate treasury. Chief Executive Michael Saylor said in August that the company expected government responses to the pandemic to have a depreciating effect on fiat currencies and saw bitcoin as a viable alternative.

Attracting new investors has been a long-sought goal for the crypto industry. Since the 2017 bubble popped, the bitcoin industry has been trying to build out an infrastructure for professional investors, creating everything from exchange-traded funds to options markets and custody services. 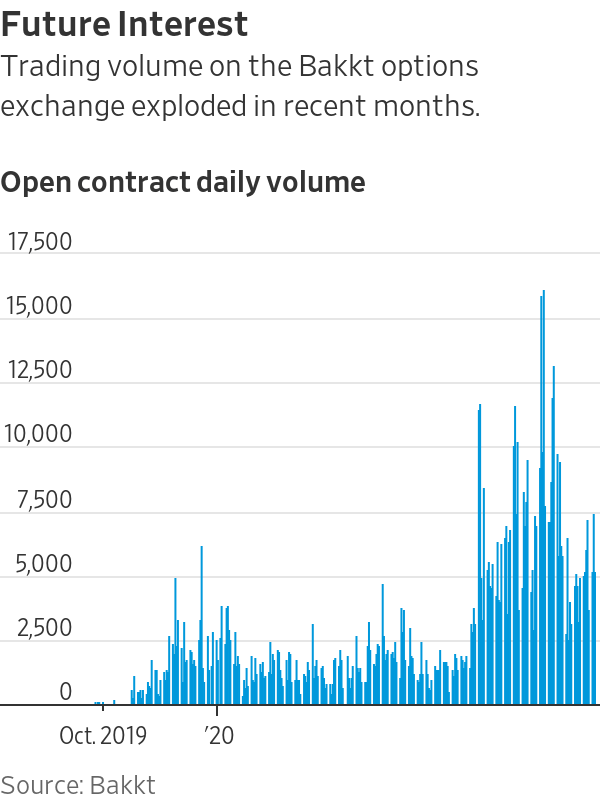 Although the Securities and Exchange Commission has yet to approve a bitcoin ETF, other services are in place. And investors are beginning to embrace them.

“You had all these rails for institutional capital to come in,” said Matthew Hougan, chief investment officer at BitWise Asset Management. “Then you had the sharp catalyst: the response to the pandemic and concerns about inflation.”

BitWise, which offers crypto-based index funds to financial advisers, hedge funds and family offices, saw its assets under management rise to $100 million as of Wednesday from about $70 million in June, Mr. Hougan said. 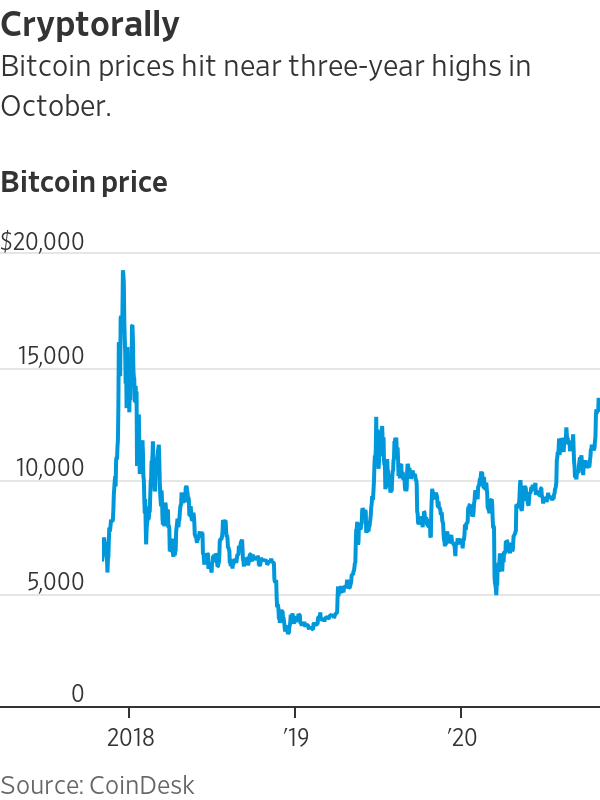 The largest seller of crypto-based investment products, Grayscale Investments, reported third-quarter inflows of $1 billion into the trust-fund products it sells in the over-the-counter market, raising its total assets under management to $5.9 billion. That growth has accelerated in the current period. The company said Wednesday that its assets under management had grown to $7.6 billion.

Options activity is increasing, too. In late 2019, for example, the number of bitcoin futures contracts traded on the Bakkt platform averaged about 1,300 a day. By September, that average had grown to 8,700.

“They’re taking a hard look at crypto and bitcoin,” he said.

Bitcoin’s potential use as a payment option even got a surprising boost earlier in October when
PayPal Inc.
said it would allow users to directly buy and sell bitcoin in their digital wallets. In 2021, it plans to expand the service to Venmo and allow the 26 million merchants that use PayPal to accept bitcoin for payment. 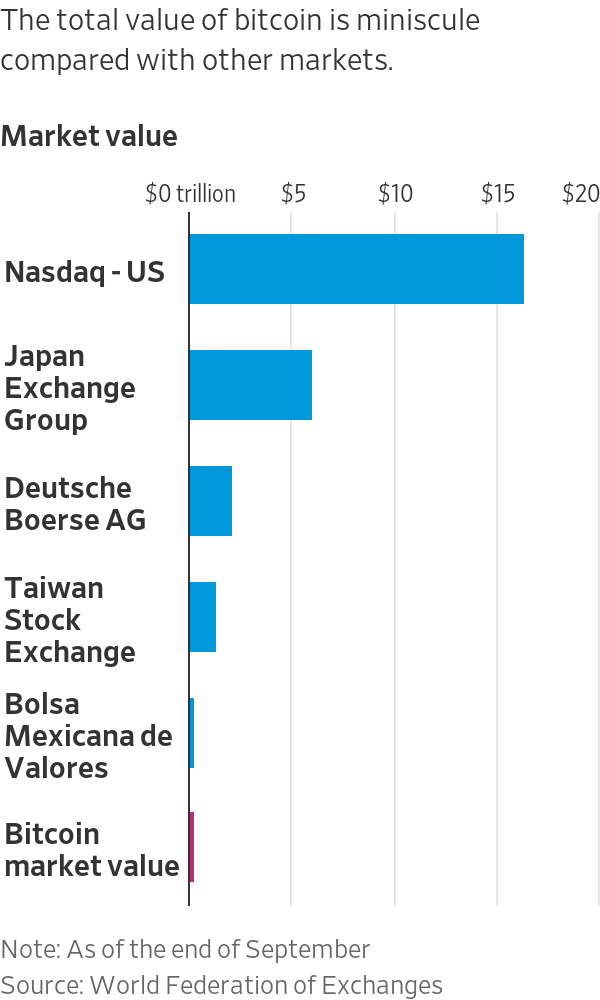 These developments together have helped push bitcoin’s total market value up to about $255 billion from about $130 billion in January.

To be sure, those inflows are modest compared with the wider capital markets, where U.S. stocks alone are worth nearly $52 trillion. But for the small digital-currency market, it is notable.

“The market is just not that big,” Mr. Hougan said. “A few institutions making an allocation is significant.”

The question for the bitcoin market is the degree to which those flows will continue to increase. For all the feel-good news, there are still substantial question marks.

For example, even with PayPal opening bitcoin up to merchants, there may not be much demand for it as a means of payment, especially in the U.S. That is because the Internal Revenue Service has stepped up its effort this year to treat bitcoin not like a currency but like a security, forcing users to pay capital-gains taxes on any transaction that results in a gain.

Moreover, bitcoin’s claim as a haven asset or inflation hedge has yet to be proven. For one thing, it has been around for only about 11 years, and for most of that time, it has been ignored by the mainstream and viewed a curiosity for risk takers. It has no record as a wide-scale asset class.

Also, inflation may simply fail to take off no matter what central banks do, much as it has for the past decade or so. That would undercut bitcoin’s use as a hedging tool.

“Don’t put in more than you can afford to lose,” he said.

Write to Paul Vigna at paul.vigna@wsj.com

FDA Grants Inhaled Use IND for RLF-100 (Aviptadil) to Treat Patients With Moderate and...