Bitcoin enjoyed an impressive bull rally over the past month that saw its price rise to nearly $16,000 on November 6th. Although the upward pressure seems to have cooled off in the last few days, the rising demand among institutional investors suggests greener pastures ahead.

The buying pressure behind Bitcoin skyrockets

A new wave of billionaires appears to be flocking the cryptocurrency market as faith in the traditional monetary system fades.

Are you looking for fast-news, hot-tips and market analysis? Sign-up for the Invezz newsletter, today.

Hedge fund manager Paul Tudor Jones recently noted that Bitcoin is at the early stage of what could be a financial revolution. The head of Tudor Investment Corporation stressed that as more people believe in the idea behind BTC’s technology, the case grows stronger for it to act as a hedge against inflation and a store of value. Jones has invested about 2% of his portfolio in the flagship cryptocurrency as he forecasts a massive upside momentum building up.

Along the same lines, the former chairman and president of Duquesne Capital, Stanley Druckenmiller has jumped on the Bitcoin bandwagon. The ultra high-net-worth investor said to have transferred part of his capital into this digital asset as it seems to be more profitable than gold and treasuries. Druckenmiller anticipates that BTC will likely outperform all assets in his portfolio while the dollar goes into a three- to four-year decline.

The increasing interest from institutional investors correlates with the growing number of Bitcoin whales. Data from behavior analytics platform Santiment reveals that the number of addresses with 10,000 to 100,000 BTC surged by 6.73% over the past three weeks. Roughly seven new whales have joined the network in such a short period.

The continuous increase in the number of big players behind Bitcoin may seem insignificant at first glance. Still, when considering they hold between $150 million to $1.5 billion in BTC, the spike in buying pressure can translate into billions of dollars and may soon be reflected on prices.

The pioneer cryptocurrency has gone through a week-long consolidation phase that forced the Bollinger bands to squeeze on its 4-hour chart. Squeezes are indicative of low volatility periods and are usually succeeded by significant price movements. The longer the contraction, the higher the probability of a strong breakout.

This index’s inability to provide a clear path for the direction of Bitcoin makes the area between the lower and upper band a reasonable no-trade zone. Only a 4-hour candlestick close outside of the $15,760-$14,850 range will determine where prices are headed next. 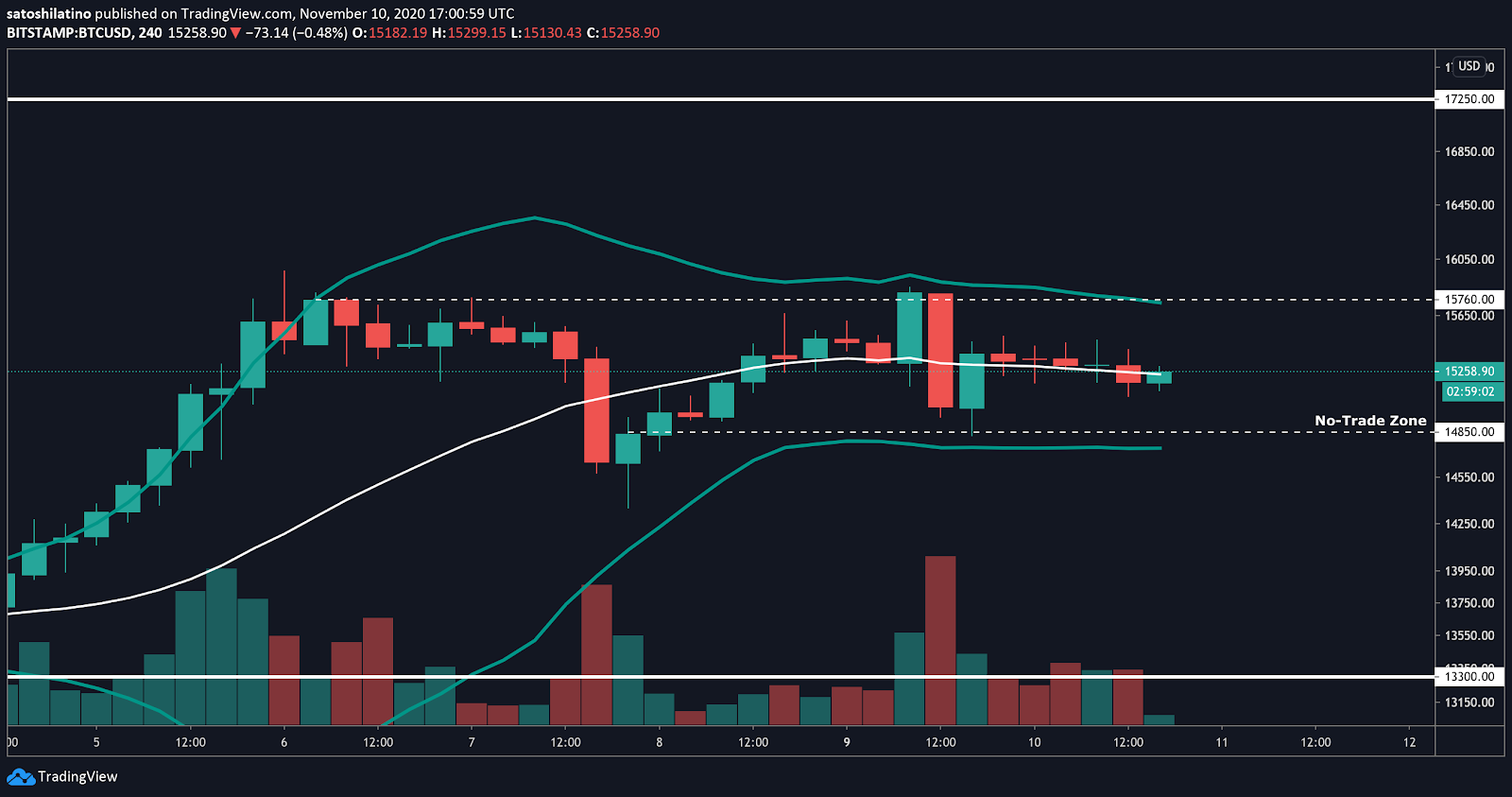 If demand among institutional investors continues surging, it may have the strength to push Bitcoin above the overhead resistance. Moving past this critical hurdle could see the bellwether cryptocurrency rise towards the next supply wall at $17,250.

On the flip side, breaking through support will likely trigger a 10% correction towards $13,300.

Despite the ambiguous outlook that Bitcoin presents, prices may continue to rise in the long-term. The high levels of buying pressure behind it makes it nearly impossible to lean bearish at the moment. But this may be an ideal for the bears from a counter sentiment perspective as investors seem to be growing “extremely greedy.”

Regardless, it is imperative to remain on the sidelines waiting for a clear candlestick close above $15,760 or below $14,850. Such strategy may help reduce risk and maximize profits.

Our Constitution was badly shattered and violated: Trump

S'porean scientist working on cancer vaccine in US which will move to first phase...

Investors Diurnal Team - November 18, 2020 0
Bitcoin made headlines after rising to a new yearly high of $18,500 on Wednesday, November 18th. As market participants appear to be entering a state of FOMO, on-chain data reveals that there is more room to go up before a correction materialises.  The crowd goes wild as Bitcoin surges to new yearly highs Bitcoin captured the market’s attention following the impressive bull run it has seen over the past few weeks. The flagship cryptocurrency has risen more than 40% since November 3rd while buying pressure continues to build up behind it. The steady upward price action has not gone unnoticed. The number of BTC-related mentions on different social media networks went through the roof as prices breached the $18,000 mark. LunarCRUSH registered a massive spike in the social engagement activity around Bitcoin. Nearly 1.16 million engagements were recorded over the past 24 hours, representing a 315% increase in the last four days.  More importantly, approximately 68% of all the social interactions have been bullish about the pioneer cryptocurrency. These include favorites, likes, comments, replies, retweets, quotes, and shares, to name a few. The rising chatter around Bitcoin is a concerning sign from a counter sentiment perspective. Usually, when
Bitcoin

Here’s a level at which you should buy Bitcoin (BTC) in...

Investors Diurnal Team - October 30, 2020 0
Bitcoin (BTC) price is heading towards a strong monthly close after gaining about 25% in October The buyers were successful in tagging the key short-term resistance near $13,900 Any pullback to $12,500 is likely to be seen as an opportunity to get on the long side Bitcoin (BTC) price is fighting to secure the largest amount of monthly gains since April. The price action is trading about 3% higher this week after tagging the key short-term resistance near $13,900. Fundamental analysis: High transaction fees Bitcoin transaction fees climb to a 28-month high as the blockchain sees the worst congestion since 2018. The average Bitcoin transaction cost since Wednesday was 0.00086764 BTC, or $11.66, the highest in more than two years. Are you looking for fast-news, hot-tips and market analysis? Sign-up for the Invezz newsletter, today. Over the last 12 days, average Bitcoin fees surged by 573% together with the increase in price from $11,200 to $13,800.   “Bitcoin mempool [memory pool] is back in focus in the wake of rising transaction volumes, causing congestion in the network and consequently driving fees higher,” said Denis Vinokourov, helm of research at the prime brokerage Bequan. Mempool refers to the
Bitcoin