The words every pundit should have said earlier this week are the same ones every investor should have in mind most of the time.

All those pollsters and people on cable TV news who were predicting a “blue wave” or, conversely, a landslide for President Trump were wrong. The lesson you should derive from this is not merely that politics is unpredictable or that so-called experts need to be more humble. You should also ask yourself whether some of your own certainties about investing might be just as wrong.

Individuals have a critical forecasting advantage over professionals. A guru who often says “I don’t know” won’t be invited back onto cable TV or other public platforms, where consistency, certainty and confidence matter at least as much as accuracy. You, however, are free to admit your ignorance or change your mind without losing face in front of millions of people. 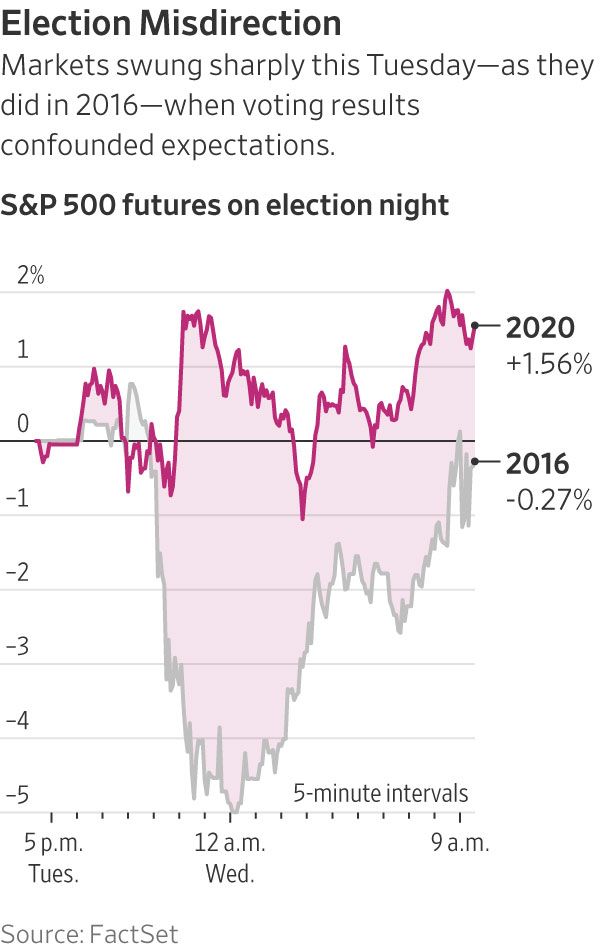 The trick is to embrace uncertainty without fooling yourself into thinking that impetuous decisions can give you control over it.

Financial adviser Derek Tharp, president of Conscious Capital Inc., in Portland, Maine, says about a quarter of his clients talked with him in recent weeks about getting out of the market entirely.

Jason Zweig writes about investment strategy and how to think about money.

Such clients, says Mr. Tharp, are “trying to get one thing they can grasp onto and control in a very uncertain environment.” (Only one ended up making a significant change.)

When people feel that uncertainty is high and their environment is difficult to control, they often perceive nonexistent patterns in random data. We may also overestimate the prevalence of negative information. Both can lead to bad decisions.

“If you take some control with the selling but you don’t plan how to control buying back in, then it will feel extra hard later,” says Maria Chrin, managing partner at Circle Wealth Management in New York. Without reliable measures to decide when the market is safe enough to invest in again, you will end up frozen with indecision or buying on impulse.

That realization alone helps many people stay invested. “Then,” says Ms. Chrin, “they feel more in control because they reassessed their plan, even though they didn’t take that action of selling.”

Investors should also realize that at a time like this, when no one seems like an expert, it’s a little too easy to think you have become one yourself.

“If you know that you are not sure, you have a chance to improve the situation,” the physicist Richard Feynman said in a 1963 lecture. “Doubt is not a fearful thing, but a thing of very great value.”

Here are a few investment beliefs I have begun to be doubtful about.

For many years I’ve assumed bonds will buffer the fluctuations of stocks. In 2008-09 and again for most of this year’s pandemic panic, prices of high-quality bonds like U.S. Treasurys went up as stocks fell.

Are you reconsidering any of your long-held investing beliefs? Join the conversation below.

Now, with interest rates close to zero, investors no longer buy bonds for income. So far, they are still flocking to them for safety. If that changes—as it could if inflation flares up—bonds might no longer cushion a crash in the stock market.

In the 12 months through Sept. 30, investors poured an astounding $427 billion into bond funds, according to Morningstar. I don’t think we’re there yet, but the time may come when that flight to safety looks unwise.

On another front, I have always maximized my contribution to my 401(k) and urged readers to do so as well.

For most people, that almost certainly is still good advice. However, massive government spending, including the stimulus to combat the pandemic, will presumably have to be paid for at some point. Withdrawals from a 401(k), taxable during retirement at your ordinary income rate, would shrivel in net value if future tax rates rise (unless your income then is very low).

If you can afford contributions to a taxable account as well as to a tax-advantaged retirement plan, consider practicing “tax diversification.” Put enough into the 401(k) to capture your employer’s matching contributions. Then, if you’re eligible, contribute to a Roth individual retirement account or a Roth 401(k) if your employer offers it. There, you contribute after-tax dollars, but the withdrawals will be tax free. If taxes go up later, you’ll be glad you diversified.

More from The Intelligent Investor

One other doubt: I’ve long advocated that U.S. investors should have a big commitment to international stocks. After all, almost half the world’s stocks by market value, and more than half by number, are outside the U.S.

And this week’s shocking rub-out of the $34 billion public offering for Ant Group Co. by the Chinese government is a reminder that many countries around the world play by arbitrary rules.

Although I haven’t yet given up on it, I’ve begun to doubt whether putting 40% of my stock assets in shares listed outside the U.S. is a good idea.

If you believe in something so deeply that no amount of contradictory evidence could persuade you that you are wrong, that’s not belief. It’s religious faith. That belongs in your place of worship, not in politics and certainly not in your portfolio.

Write to Jason Zweig at intelligentinvestor@wsj.com