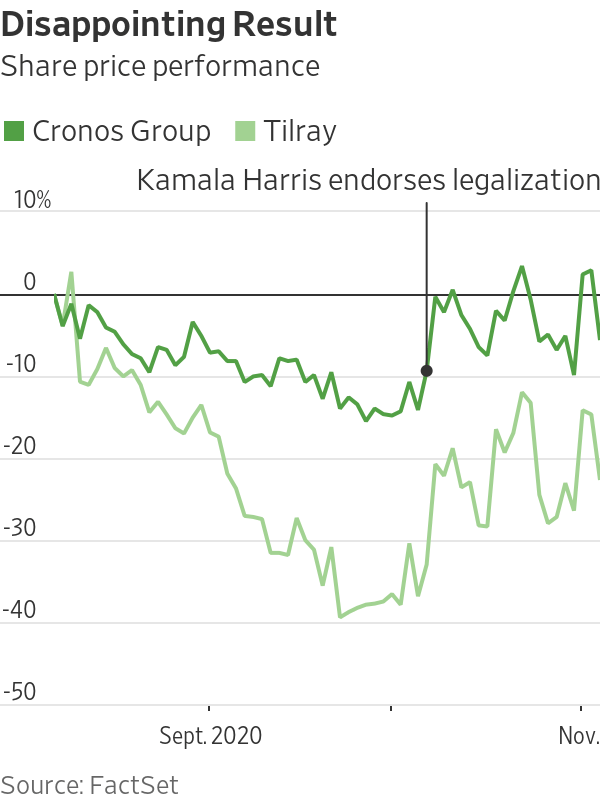 Although the final U.S. election tally isn’t in yet, it looks like a poor result for pot stocks.

As of Thursday morning, the Democratic Party is closer to the 270 electoral votes needed to win the White House. This should be good news since vice-presidential candidate Kamala Harris said publicly in October that a Biden administration would legalize cannabis. Separately, voters in New Jersey, Arizona, Montana and South Dakota approved ballot measures Tuesday to make recreational marijuana legal. Mississippi approved medical use.

But the Republican Party may hang on to the Senate, dashing hopes of a blue wave that had lifted pot stocks in the weeks running up to the poll. Any move to legalize cannabis at the federal level would have to go through the upper chamber of Congress, where it isn’t likely to get support. In another blow, Colorado Sen. Cory Gardner—one of the few Republicans pushing for changes to federal laws—lost his seat.

Full legalization is probably off the table until after the midterm elections, leaving cannabis companies in the same old limbo. The industry is effectively locked out of capital markets and institutional investors steer clear of the stocks. Nor are U.S. pot companies allowed to deduct costs such as rent or wages in their tax filings, saddling them with effective tax rates as high as 85% in some cases.

The SAFE banking act—a proposal to give cannabis companies access to commercial banking services—is unlikely to be approved by the Senate as it stands either. Pot businesses will continue to rely on credit unions that charge through the nose. And cross-border deals will have to wait. Canadian stocks like
Cronos Group
and
Tilray
closed down 9% Wednesday after it became clear that it will be several more years before they can jump into a fully legal U.S. market.

It isn’t all doom and gloom. With five new states going legal, the size of the legitimate cannabis market in the U.S. will grow by several billion dollars. And it is becoming harder for politicians to ignore Americans’ increasingly liberal attitude to marijuana in the ballot box.

The first word on what Wall Street is talking about.

Large U.S. multistate operators such as Curaleaf that are close to breaking even may actually benefit from the status quo if weaker rivals are slowly choked off. “It will be tough for smaller and less well-funded companies to defend their market share,” says John Pinto, who manages cannabis-focused SOJE Green Fund. “The big guys can continue to use operating cash flow and access to lower-cost debt to cement their lead.”

Overall, however, the election hasn’t gone as hoped. Pot’s outsider status won’t change for a few years yet.

PNC Is in Advanced Talks to Buy U.S. Arm of Spain's BBVA

Vaccine Jolts Markets in a Way Biden and Trump Couldn't

Lyft, Datadog, fuboTV: What to Watch When the Stock Market...