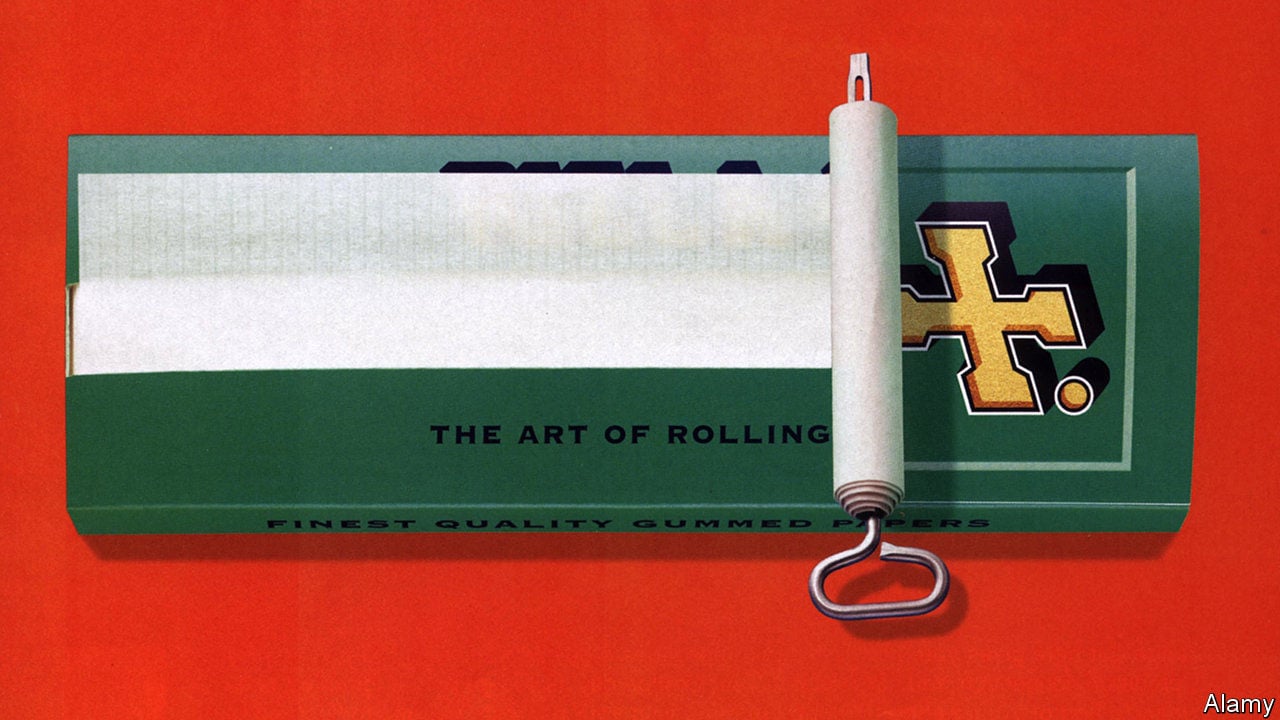 IT IS HARD to imagine a simpler product than a cigarette paper: small, rectangular, with no moving parts. So cheap it is often given away. And replaceable; desperate smokers have been known to tear out Bible pages as substitutes. It has none of cigarettes’ glamour (though, these days, some of their stigma). No wonder Rizla, which produces 45bn rolling-papers a year and dominates the industry, attracts little attention as a marketing phenomenon. Yet it is one of a few brands, like Coca-Cola, Google, Jacuzzi or Tupperware, whose name (“Got a Rizla?”) defines the product.

That is because a simple packet of Rizlas exhibits many of the qualities—history, design, consistent quality and values—that marketing gurus consider hallmarks of enduring brands. Flip open the cover and you find a lesson in how to remain relevant. Aptly for a business long associated with the counterculture, the tutorial is a wry summary of the dark arts of marketing.

Start with history. Long ago Rizla may have realised that if you lack an illustrious heritage, you could invent one. “The Original…since 1796”, as the underside of its packets’ lids still boasts, refers to a time when Napoleon Bonaparte supposedly granted the Lacroix family of south-western France a licence to supply rolling papers to French troops, according to Rizla’s website. This may well be nonsense. A museum in Angoulème, the Lacroix ancestral seat, calls this historical “fantasy” and says that until 1860 the family manufactured paper but not for cigarettes. Its history of the clan says it was not until 1867 that Léonide Lacroix created the brand. A spokesman for Imperial Brands, which owns Rizla, says the story is widely recognised to have been told through the generations. “It’s a heritage we inherited when we acquired the Rizla brand in the 1990s,” he says. The discrepancy notwithstanding, Napoleon is now part of Rizla folklore.

Or take design. Rizla’s name and its cross logo are cryptic clues, which also date back to the 19th century. Riz is French for rice, as in the paper. La is the first syllable of Lacroix. The second, croix, is French for cross—and symbolised by a gold one appended to the name. For Rizla fans the logo is iconic. A former marketing executive recalls emblazoning it on the heel of wellies that the company distributed at music festivals, so that the imprint would stand out in the mud. Rizla does not advertise to its customers that they can use its papers to smoke marijuana as well as tobacco; that would break the law in many countries. But it doesn’t have to: pot-heads do it themselves, by plumping for its king-size papers (which the company insists are only produced to emulate ultra-long cigarettes).

Consistent quality is another trait, and a must to ensure that the claim on the packet—“Keep Rolling with the World’s No. 1”—remains true. Being owned by Imperial, a global tobacco giant valued at £15.5bn ($21bn), helps. Rizla is a sleek industrial machine, producing almost all of its papers at a big factory in Wilrijk, a suburb of Antwerp in Belgium. Reels of paper, now made of wood pulp rather than rice, are layered with gum, cut into strips, packaged and shipped to about 100 countries. It is highly automated. Ties to Imperial, owner of Golden Virginia tobacco used for rolling, offer a structural advantage that rivals lack.

The trick is to tap its parent’s deep pockets while promoting values that appeal to roll-your-own smokers who like to think of themselves as individualistic iconoclasts. One is attention to detail, which users obsess over. The papers come in six thicknesses, from 12.5 grams per square metre (in silver packets) to 26.5g/m2 (liquorice).

The second value, irreverence, is more ephemeral. Brice Barberon, who took over as Rizla’s boss in March, speaks of the “tribal element” to rolling your own cigarette. “The kind of blend you will choose, the kind of paper, the way you roll it, how much tobacco you put in, there is a kind of ritual in it that our consumers like…that brings people together.” Brits favour green packets (17.5g/m2). The Dutch, orange (20g/m2). The French, Micron (12.5g/m2).

Tribes share a lingo, musical tastes, pastimes, memes, clothing and a sense of humour. That is a great way to reach them. A former executive says that Rizla once used models dressed as border guards with high heels and handcuffs as part of a “show me your papers” campaign. With that comes the most effective, and cheapest, form of marketing—word of mouth.

Going from paper to digital

For all its guile, Rizla faces challenges ahead, notably the rise of upstarts that use less subtle social-media campaigns to build a new kind of cult following, especially among pot-smokers. They include Raw, started by Josh Kesselman, a shaggy-haired American entrepreneur who instructs his 1.7m followers on Instagram how to roll the perfect joint (“if you pack it too tight, it can’t run right”).

Vaping presents another problem. Though smokers are trading down to roll-your-own cigarettes during the pandemic, sales growth in the longer term is expected to weaken. Rizla is diversifying. Coinciding with the European Union’s ban on menthol cigarettes, it now sells “flavour cards” that infuse a packet of cigarettes with the taste of menthol within 60 minutes.

The biggest risk, though, may be thinking it must change too much. It has a market position to protect, but also a heritage. This may not quite date back to 1796 but is, these days, real enough. Rizla’s competitors can, at best, hope to fake it. ■

How a mob dragged and beat police at the Capitol

Investors Diurnal Team - January 7, 2021 0
The Travel + Leisure travel club and its 60,000 members were the big lures for the nation’s biggest time share resort company to pay $100 million to buy the publication from Meredith. “They generate a profit of $5 million to $6 million a year,” said Michael Brown, the CEO of Wyndham Destinations referring to the T+L travel clubs which charge member between $10 to $20 a month. And that is what he plans to expand. “We feel it is a smart move to invest in those businesses that are our core competency.” He said Wyndham has two lines of businesses, owning 230 vacation resorts worldwide and a time share exchange program that has 5 million members. Brown said he plans to change the name of the publicly traded company that did nearly $4 billion in annual revenue in 2019 to the Travel + Leisure Company, effective in mid-Feb. “We love the name,” he said. But he pledged total independence to the media properties that will continue to be run by editor in chief Jacqui Gifford and Meredith, which has a 30 year non royalty licensing deal for the media. “They’ll supply the inspiration, we’ll supply the fulfillment,” said Brown. Although
Business

Investors Diurnal Team - December 30, 2020 0
The investment bank behind AT&T’s $109 billion acquisition of Time Warner is going public through a merger with a blank-check company — putting an exclamation point on an already frenzied year the so-called SPAC craze Perella Weinberg on Wednesday said it’s agreed to merge with FinTech Acquisition Corp. IV in a $975 million deal that’s expected to close in the first half of 2021. The combined entity will trade on the Nasdaq. Founded in 2006 by Wall Street veterans Joseph Perella and Peter Weinberg, Perella Weinberg is a boutique investment bank specializing in mergers and acquisitions. Perella, a Morgan Stanley alum, and Weinberg, a former senior Goldman Sachs exec, raised $1.1 billion to get their bank started and went on to play key roles in megadeals like the $11 billion sale of NYSE Euronext to Intercontinental Exchange, and AT&T’s acquisition of Time Warner, completed in 2018. “I am proud to see PWP take this historic step and enter the public markets,” Perella said in a statement Wednesday.  “Which we expect to strengthen our ability to grow our leading firm that clients turn to for trusted advice and thought leadership.” FinTech Acquisition was launched in September by financial entrepreneur Betsy Cohen.
Business

Investors Diurnal Team - January 5, 2021 0
IBM announced Tuesday that the former Trump advisor and Goldman Sachs president Gary Cohn will join the New York-based tech giant as Vice Chairman. In a statement, IBM said that Cohn would also join the company’s executive leadership team and work closely with IBM chief Arvind Krishna “on a wide range of business initiatives and external engagement.”  Cohn, 60, helped lead Goldman from 2006 to 2017 serving as COO and top lieutenant to then-CEO Lloyd Blankfein. He left Goldman at the end of 2016 to join the Trump administration where he played a key role on the president’s corporate tax cuts and regulatory agenda. Since leaving the White House in early 2018, the 6’3″ outspoken executive joined in on the SPAC craze by teaming up with investor Larry Robbins to list $1 billion blank check company Cohn Robbins Holding Corp. “I am honored to be joining IBM,” Cohn said in a statement. “One of the world’s most important companies, providing technology that helps organizations be agile and resilient in unpredictable times.” In a tweet, Cohn assured his SPAC investors that he would remain involved in finding a business to take public. “My commitment to Cohn Robbins Holdings Corp. is unwavering,” he