BTC has shot up in the last 24 hours, recording double-digit gains and hitting the $40k mark just three days after pulling back to $30k.

This uptick was certainly a surprise as many analysts called for a pullback below $30,000, or even said that “this bubble has popped” and called for another 85% retracement, which the largest cryptocurrency by market cap saw after its 2013 and 2017 bull runs.

Are you looking for fast-news, hot-tips and market analysis? Sign-up for the Invezz newsletter, today.

Bitcoin’s failed attempt of breaking the $42,000 all-time high sparked the bears’ interest in the cryptocurrency as many analysts called for a “bubble bursting” once Bitcoin started dipping. Some even went as far as calling a 85% retracement and a BTC/USD price of 6,000.

There were, of course, many prominent bullish investors which stated that Bitcoin going to $30k was just a market correction that’s about to be “flipped” soon. Tyler WInklevoss, co-founder of the exchange Gemini, posted a tweet regarding the most recent price movement, stating:

“They said #Bitcoin died on Monday, but now it’s above 37k. Don’t listen to the noise, stay focused.”

BTC still didn’t fully recover from its week of losses, as it managed to lose 1.96% week-over-week. When compared to other cryptocurrencies, ETH and XRP managed to lose 4.23% and 17.82% over the same period, respectively.

Bitcoin’s dominance in the crypto sector also increased, and is currently sitting at 69% of the total crypto market cap.

BTC has been trying to recover after dropping to the lows of $30k, and seemingly found support at the 21-day EMA. The cryptocurrency started to push towards the upside once the bulls were confident enough to start buying larger amounts of BTC, and the price started shooting up, reaching as high as $40,112. The cryptocurrency is now trading slightly below the $40k level.

Bitcoin is now in very dangerous and unstable territory, as it faces a strong psychological resistance level of $40,000 as well as the all-time high level of $42,000. If we look at the downside, BTC has many strong support levels, most notably the 21-day moving average, the zone around $38,000, and the zone around $34,600.

Bitcoin’s RSI on the daily time-frame stayed in the overbought territory for a very long time now, and has dropped below it during the most recent crash. However, the oscillator value is on the rise again, currently sitting at 69.66 and aiming up. 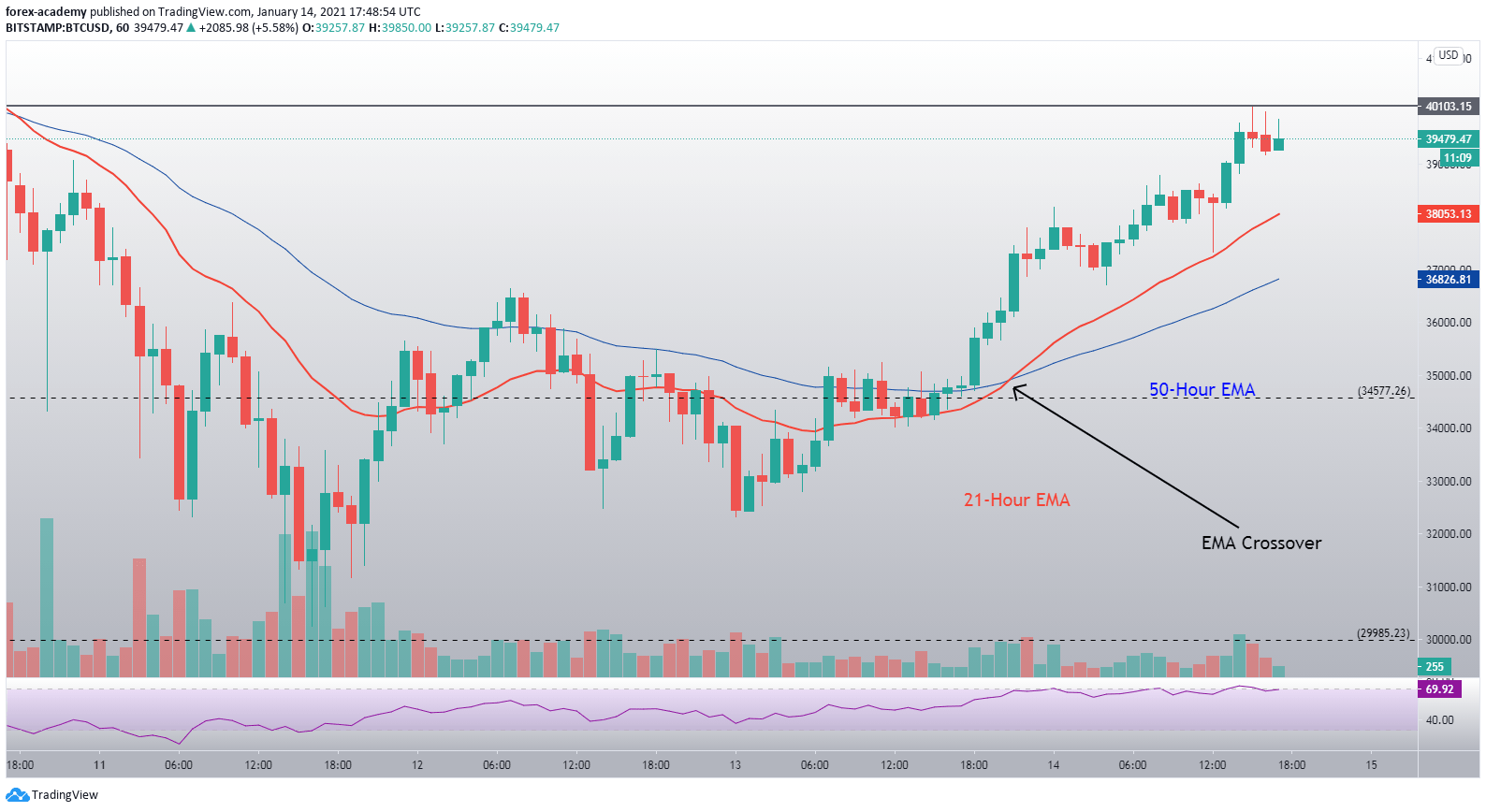 BTC’s hourly time-frame shows the importance of the 1-hour time frame, as well as its exponential moving averages. Bitcoin tried to form a top near the $38k mark at one point, but the dip was quickly stopped by the 21-hour EMA, which sparked another push by the bulls. We can also see that the 21-hour EMA crossed over the 50-hour EMA, which is a bullish indicator.

Washington a fortress ahead of Biden's inauguration

Investors Diurnal Team - December 30, 2020 0
Bitcoin (BTC) price touched yet another all-time high on Sunday, breaking above the $28,000 mark for the first time ever. However, some analysts suggest that the world’s biggest cryptocurrency could lose its momentum at the start of 2021. Fundamental analysis: Different opinions on the future price direction Mark Newton, founder and president of investment management firm Newton Advisors said Bitcoin could slow down in early January.  Are you looking for fast-news, hot-tips and market analysis? Sign-up for the Invezz newsletter, today. “It is still quite bullish on an intermediate-term basis given that it just broke out to new all-time highs,” Newton said.  “I think we have a ways to go. Near term, my cycle composite shows us peaking out in early January.” The cryptocurrency’s weekly chart and technical indicators point to a surge in interest, mostly among institutional investors, he added. Also, google search numbers for Bitcoin increased by 750% compared to the same period last year, but still far away from its peaks three years ago.  ″[With] SPACs right now, you can make money at 10, 15, 20% a day,” he said. “I just don’t think that investors have quite the appetite for crypto while the
Bitcoin

Here’s the next upside target for Bitcoin (BTC) buyers

Investors Diurnal Team - January 5, 2021 0
Large institutional investors have entered the cryptocurrency market, crypto analyst says The world’s largest digital asset printed a new all-time high of $34,800 on Sunday The only resistance line that is possible to be identified is $46,500 Bitcoin (BTC) price rose to new all-time highs on Sunday, before rotating lower on profit-taking. Buyers are now taking a step back before a continuation of the uptrend can take place.  Fundamental analysis: Strong institutional demand Henri Arslanian, a global crypto leader at PwC, believes that large institutional investors have entered the cryptocurrency market, which is reflected in the recent uptrend.   Are you looking for fast-news, hot-tips and market analysis? Sign-up for the Invezz newsletter, today. Many analysts continue to argue that Bitcoin has joined gold as a hedge against inflation. Massive stimulus packages unveiled across the globe are likely to increase inflation in the coming years.  “When you look at this bitcoin rally that we have been seeing in the last couple of weeks and months, really, there’s two big elements driving it. One is the continuous entry of institutional players,” Arslanian said. “But also there’s a lot of regulated players as well. This was not the case a
Bitcoin

Investors Diurnal Team - January 19, 2021 0
Bitcoin (BTC) price is recovering ground after dropping to low $30,000s as the price action consolidates near the highs.  Fundamental analysis: Options market yielding bullish signals The crypto options market suggests there is a chance that BTC exceeds $50,000 by the end of January. A week ago, the world’s top cryptocurrency has plummeted $40,000 to $30,305 as a result of a sharp sell-off in the spot market, particularly on the Coinbase exchange. Are you looking for fast-news, hot-tips and market analysis? Sign-up for the Invezz newsletter, today. It appears that investors have been betting on the ongoing rally in the options market and are assigning a 20% chance that Bitcoin could surge more than $50,000 by the end of the month.  Such a price rise would be impressive, even for Bitcoin standards, as there are only two weeks left until the end of the month and the cryptocurrency is about 25% short from the $50,000 mark.  However, it is not ruled out as Bitcoin price has already made bigger leaps in the past. For example, the cryptocurrency has surged 52% from $19,000 to $29,000 in the last two weeks of December 2020. Furthermore, U.S. president-elect Joe Biden is set to announce a $2 trillion aid package on Thursday, which is expected to reinforce Bitcoin’s bullish case in the long term. Technical analysis: Consolidation pattern  Bitcoin price is now consolidating within a symmetrical triangle and it represents a period of consolidation before a breakout/down takes place. Given that we are in an uptrend, the chances of a breakout are higher. In this case, the measured target for Bitcoin investors is the $50,000 mark.  Bitcoin (BTC) daily chart (Trading View) Furthermore, the 161.8% Fibonacci extension line of the most recent correction lower also comes in the region of $50,000. In this case, these areas tend to act as a magnet as they attract the price action towards a zone of interest.  Summary Bitcoin price is showing signs of sharper recovery as option market investors have assigned a 20% probability that the cryptocurrency could break above $50,000 by the end of the month. On the technical side, Bitcoin is consolidating within a symmetrical triangle with a breakout upside potentially targeting $50,000.