Superlow interest rates in Europe helped China to sell its first negative-yielding debt, as it raised about $4.7 billion in a three-part deal in euros.

The debt sale drew robust demand, aided by China’s rapid return to economic growth after tackling the coronavirus and the relative scarcity of Chinese bonds denominated in the common currency.

This is the first time that China has sold negative-yielding debt, according to Dealogic. 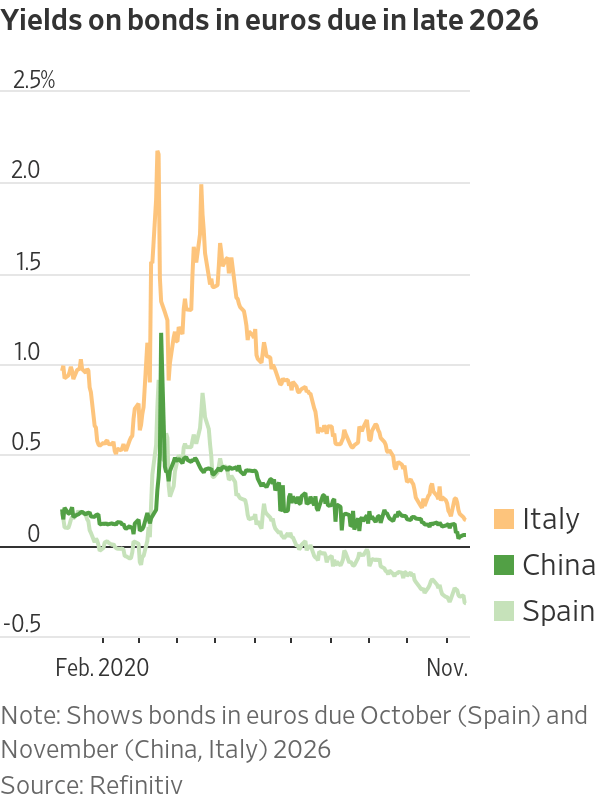 Investors placed total orders of about €18 billion, said Samuel Fischer, head of China onshore debt capital markets at
Deutsche Bank,
one of the banks that handled the deal.

“People want more exposure to China,” Mr. Fischer said. “China’s financial markets are opening, but there is still a broad scarcity of the sovereign [debt] among investors. The story of China’s Covid turnaround and the resilience of its economy are also things people like.”

James Athey, an investment manager at Aberdeen Standard Investments, said borrowing in euros had other benefits, as well as low interest rates. “China also wants to be less reliant on the U.S. and U.S. dollar markets,” he added.

Debt with a market value of some $16.9 trillion is trading at negative yields, according to the ICE BofA Global Broad Market Index, a benchmark for the world bond markets.

China has become a more active international borrower recently. Last November, it sold bonds in euros for the first time since 2004. And a month ago, it raised $6 billion by selling new dollar bonds, matching a record set last year.

China’s economy grew 4.9% in the third quarter from a year earlier, moving back toward its pre-coronavirus trajectory. The International Monetary Fund said in October it expected China to be the only major economy to grow this year, expanding 1.9%.

Public debt has ballooned around the globe as countries raise funds to fight the pandemic. Moody’s projects that China’s public-sector debt, including borrowings by governments and state-owned enterprises, will rise to 185%-190% of gross domestic product in 2020-2021 from 167% in 2019.

Andrew Mulliner, a bond portfolio manager at Janus Henderson, said most countries’ debt-to-GDP ratios had increased substantially, so it was important to focus on a country’s ability to control and pay off the debt. “What’s become increasingly apparent is that these high debt loads aren’t necessarily a problem if you’ve got a captive central bank,” he said.

“China’s also benefiting currently from big inflows from people being forced to own their bonds anyway through indexation,” said Mr. Mulliner.

Write to Frances Yoon at frances.yoon@wsj.com and Anna Hirtenstein at anna.hirtenstein@wsj.com

For Walmart's Post-Covid Outlook, No Plus Is a Minus