China made it easier for traders to bet the yuan will fall in value, a move analysts said showed that the country’s central bank wants to slow any further rally in the currency.

Buoyed by China’s economic rebound and the country’s relatively high interest rates, the yuan has just closed out its best quarter against the dollar in 12 years, and on Friday it hit 6.69 per dollar, the strongest since April 2019.

Starting Monday, banks no longer need to deposit 20% of their sales when buying and selling what are called currency forwards denominated in U.S. dollars for clients, the People’s Bank of China said Saturday. China has phased this system in and out several times since 2015, most recently reintroducing the deposit requirements in August 2018.

On Monday, the currency weakened about 0.3% to about 6.71 per dollar in both the tightly controlled onshore market and freer offshore markets in Hong Kong and elsewhere.

How many Chinese yuan $1 buys 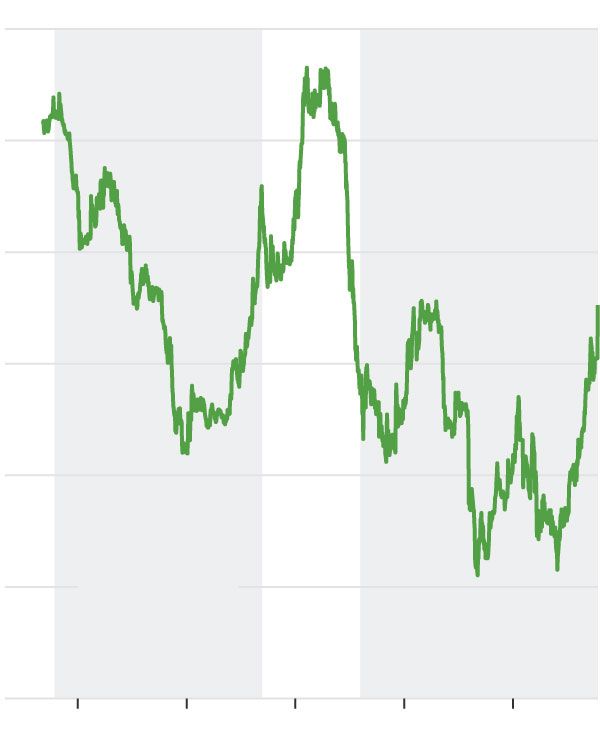 The central bank “wants to slow down the appreciation of the yuan for the time being,” said Zhou Hao, an economist at Commerzbank in Singapore. How effective that will be depends on who wins the U.S. election, and whether the Chinese economy continues to outperform and the dollar weakens further, he said.

Mr. Zhou said the yuan’s recent rally was also partly due to markets pricing in a win for Democratic presidential candidate Joe Biden, who investors see as more moderate on China, and that a victory for President Trump would “be very bad for the yuan, at least for a few days”.

Mr. Chao said the Golden Week data showed that “the bulk of Chinese households feel comfortable leaving their homes and spending money.” News of a potential visit by President Xi Jinping to Shenzhen, where he might announce plans to open more parts of the economy to foreign investment, also buoyed stocks, he said.

Khoon Goh, head of Asia research at Australia and New Zealand Banking Group Ltd. in Singapore, said the central bank’s Monday reference rate for onshore yuan trading wasn’t “wildly weaker” than market expectations, suggesting the central bank wasn’t pushing too hard against the rally. The PBOC set a daily midpoint for the yuan at 6.7126 per dollar.

“This is all about helping people manage currency risks,” Mr. Goh said, since the 20% reserve requirement made it costly for firms and investors to hedge foreign-exchange risks.

Still, he noted that the central bank hadn’t abolished the reserve requirement, but merely set it to zero. “This is still a tool that they can utilize in future. They can increase it to 20% again to stem depreciation expectations if needed.”

The PBOC said it would maintain the exchange rate’s flexibility and keep it at a reasonable level, and stabilize market expectations.

Royal Bank of Canada celebrates the impact of Canada United

What the armed forces can teach business

Here are the economic implications of 4 potential US election outcomes, according to Deutsche...

Investors Diurnal Team - October 22, 2020 0
When the pandemic hit in March, a JBS meatpacking plant in Greeley, Colo., began providing paid leave to workers at high risk of serious illness.But last month, shortly after the plant was cited by the federal Occupational Safety and Health Administration for a serious virus-related safety violation and given two initial penalties totaling about $15,500, it brought the high-risk employees back to work.“Now the company knows where the ceiling is,” said Kim Cordova, president of the United Food and Commercial Workers union local that represents the workers, about half a dozen of whom have died of Covid-19. “If other workers die, it’s not going to cost them that much.”JBS USA said the return of the vulnerable workers in late September had nothing to do with the citation. “It was in response to the low number of Covid-19 cases at the facility for a sustained period of time,” a spokesman said, noting that the company began informing workers of the return in late July.The JBS case reflects a skew in OSHA’s Covid-related citations, most of which it has announced since September: While the agency has announced initial penalties totaling over $1 million to dozens of health care facilities and nursing homes,
Economy

Investors Diurnal Team - October 27, 2020 0
OAKLAND, Calif. — In 1978, a Los Angeles businessman named Howard Jarvis led an insurgent campaign to pass Proposition 13, a ballot measure that limited California property taxes and inspired a nationwide tax revolt. The law has been considered sacrosanct ever since, something California governors and legislators challenge at their peril.Now, as a pandemic tears through local budgets, a well-financed campaign backed by teachers’ unions has mounted a serious challenge to a major portion of the law: its application to commercial property.If voters approve the effort next week, they would give labor and progressive groups a striking victory in raising the low tax rates that longtime property owners enjoy. If it fails, the campaign will have spent tens of millions of dollars only to affirm that Proposition 13 is untouchable.The new initiative, Proposition 15, would amend the state’s Constitution so that properties like offices and industrial parks would no longer be protected by Proposition 13. By creating a “split roll” system, in which residential property would continue to be shielded from tax increases but commercial property would not, backers hope to capitalize on Democratic energy to raise taxes on large corporations without alarming homeowners.“We can’t afford to continue to give
Economy

Goldman Sachs’ net income jumps close to 100% in the fiscal...

Investors Diurnal Team - October 14, 2020 0
Goldman Sachs’ net income jumps close to 100% in the fiscal third quarter. The investment bank posts £8.31 billion of revenue and £7.46 of EPS in Q3. Goldman Sachs' revenue from global markets saw a 29% annualised increase. Goldman Sachs (NYSE: GS) published its earnings report for the fiscal third quarter on Wednesday that blew past Wall Street estimates for profit and revenue. The company attributed its hawkish performance to the annualised return on equity (ROE) that jumped to an all-time quarterly high of 17.5%. Learn more about return on equity. Goldman Sachs jumped 3% in premarket trading on Wednesday. Shares of the company are now trading at £163 per share. The stock had started the year at a higher £180.50 per share but had tanked to a year to date low of £104 per share in March. Are you looking for fast-news, hot-tips and market analysis? Sign-up for the Invezz newsletter, today. In related news from the United States, U.S. Bancorp said its profit fell in the fiscal third quarter on Wednesday. Goldman Sachs’ Q3 financial results versus analysts’ estimates Goldman Sachs said that its net income posted a close to 100% increase in the third quarter to £2.68 billion that translates to £7.46 per share. In the same quarter last year, its net income was capped at £1.38 billion or £3.69 per share. According to FactSet, experts had forecast a much lower £4.27 of per-share earnings for Goldman Sachs in the recent quarter. In terms of revenue, the investment bank reported £8.31 billion in Q3 that marks a 29.5% increase versus the comparable quarter of last year. Its revenue was also higher than the analysts’ estimates of £7.23 billion, as per FactSet. Goldman’s peer, Bank of America Corp, also published its quarterly financial report on Wednesday. Goldman Sachs generated £1.52 billion of revenue from investment banking in the third quarter that represents a 7% annualised growth and topped FactSet Consensus of £1.43 billion. Revenue from global markets saw a 29% year over year increase to £3.51 billion in Q3. Revenue from FICC came in 49% higher than last year Within global markets, the American multinational added, revenue from equities printed at £1.58 billion versus £1.56 billion expected. FICC (fixed income, currency, and commodities), on the other hand, posted a 49% increase in revenue to £1.93 billion in the recent quarter versus the FactSet Consensus of £1.56 billion. According to Goldman Sachs: “The operating environment continued to recover during the third quarter of 2020 from the impact of the COVID-19 pandemic earlier in the year as global economic activity significantly rebounded following a sharp decrease in the second quarter, market volatility declined modestly, and monetary and fiscal policy remained accommodative.” At the time of writing, Goldman Sachs is valued at £55.90 billion and has a price to earnings ratio of 16.04.