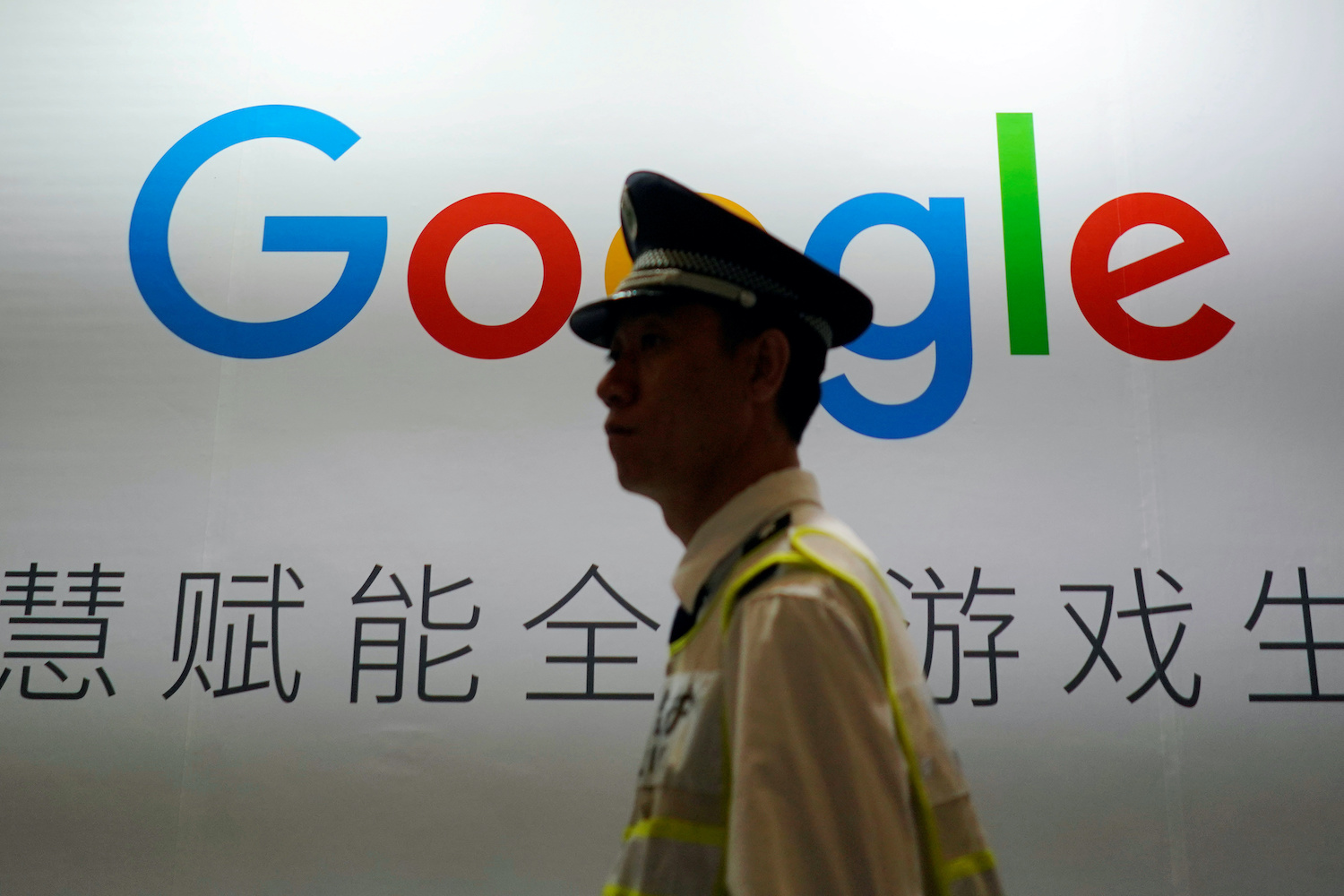 A security guard walks past a Google sign at the China Digital Entertainment Expo in Shanghai in 2018. (Reuters File Photo)

But there’s a catch: The browser, named Tuber, requires mobile number registration before use. That makes users’ browsing activities traceable and can identify people because smartphone numbers are linked to unique Chinese identification numbers. Blocked websites that can be accessed via Tuber include YouTube, Instagram and The New York Times.

The app appears to be providing a government-approved platform for the country’s 904 million netizens to legally visit overseas websites. Mainland Chinese use virtual private networks (VPN), to bypass the Great Firewall — the name given to the entity that has blocked an array of foreign Internet services, from Gmail to Twitter, for over a decade.

China regularly cracks down on illegal VPN services, eliminating VPN apps from both the Apple and Android app stores.

The app had attracted 5 million downloads on the Huawei app store as of Saturday morning. It has been available for download since at least late September, according to online posts. There are numerous WeChat posts about it, and a reporter from state media outlet Global Times even promoted the app in a Twitter post. Tuber is currently only available for Android phones, according to its website.

Tuber appears to be providing censored search results for YouTube. A search of President Xi Jinping’s name in Chinese yielded only seven video clips uploaded by three accounts claiming to be television stations in Shanghai, Tianjin and Macau. Searching for Xi’s name in English yielded no results at all.

The parent company of Tuber’s developer is controlled by the Chinese billionaire and tech mogul Zhou Hongyi, who delisted his security company Qihoo 360 from the New York stock market in mid-2016 and aligned himself with China’s national interest. The US Department of Commerce in May sanctioned two of Zhou’s companies among 24 entities it said posed national-security concerns.

A public relations employee at 360 Security declined to provide immediate comment. The Cyberspace Administration of China, which regulates the internet industry, didn’t respond to calls and emails from Bloomberg News.

The large-scale conversion of Preem's refinery in Lysekil begins

AP dives back into provincial projects

Invisalign maker Align surges 26% after reporting a boom in 3rd-quarter sales driven by...

Investors Diurnal Team - October 14, 2020 0
The Apple iPhone 12 Pro Max being unveiled during a virtual product launch on Tuesday. The event was streamed from Tiskilwa, Illinois in the US. Bloomberg The new 5G-compatible iPhone 12 line could help push up demand in the smartphone market, with the government's tax rebate "Shop and Payback" scheme anticipated to be a key driver for the segment in the fourth quarter, according to tech pundits. Apple unveiled its iPhone 12 range at a virtual event on Tuesday. They consist of the iPhone 12 mini, iPhone 12, iPhone 12 Pro and iPhone 12 Pro Max, with starting prices of US$699, $799, $999 and $1099, respectively. The US tech giant has yet to announce when the iPhone 12 line will be made available in Thailand or the pricing in baht. Narathip Wirunechatapant, chief executive of Jaymart Mobile, the handset distributor arm of SET-listed Jay Mart, said the
Tech

On 10th birthday, Instagram no longer an escape from reality

Investors Diurnal Team - October 4, 2020 0
Content on Instagram has taken a more political edge, after first becoming popular 10 years ago for its users' often upbeat photos. WASHINGTON: Artful photos of sunsets and ice cream are being challenged by more activist content on Instagram as it turns 10 years old in a time of social justice protests, climate crisis, and the pandemic. Founded in 2010 by Kevin Systrom and Mike Krieger, the app had one billion users two years and has grown fast since then, after first capturing the public's attention with its image filters, and easy photo editing and sharing tools. But playful pictures, once a hallmark of Instagram, are increasingly seen as off-key when people are "losing jobs, being sick, isolated and depressed, then on top of that the BLM (Black Lives Matter) protests and everything going on with the US election," reasoned Rebecca Davis. In 2016 she created 'Rallyandrise', an account devoted to helping
Tech

Investors Diurnal Team - October 6, 2020 0
QAnon conspiracy theories have found believers in dozens of countries around the world during the coronavirus pandemic. HONG KONG: Powered by fear, anger and big tech's algorithms, the QAnon conspiracy movement has exploded from the US political fringe into the global mainstream during the pandemic. Its influence can be seen at anti-lockdown and anti-mask rallies from Los Angeles, to London, Berlin and Melbourne -- with protesters warning, without evidence, that the pandemic is a conspiracy by a cabal of satanist paedophiles who control the world. Experts say QAnon has grown sharply during the pandemic because it acted as a binding force -- mixing its core tenet with long-running conspiracy theories about vaccines and 5G mobile technology, anti-Semitic and white supremacist tropes, as well as far-right and libertarian politics. "In some ways, the pandemic has created the perfect storm for conspiracy theories like QAnon to grow," Mackenzie Hart, a disinformation researcher at the London-based ISD think tank, told AFP. "Not only are people