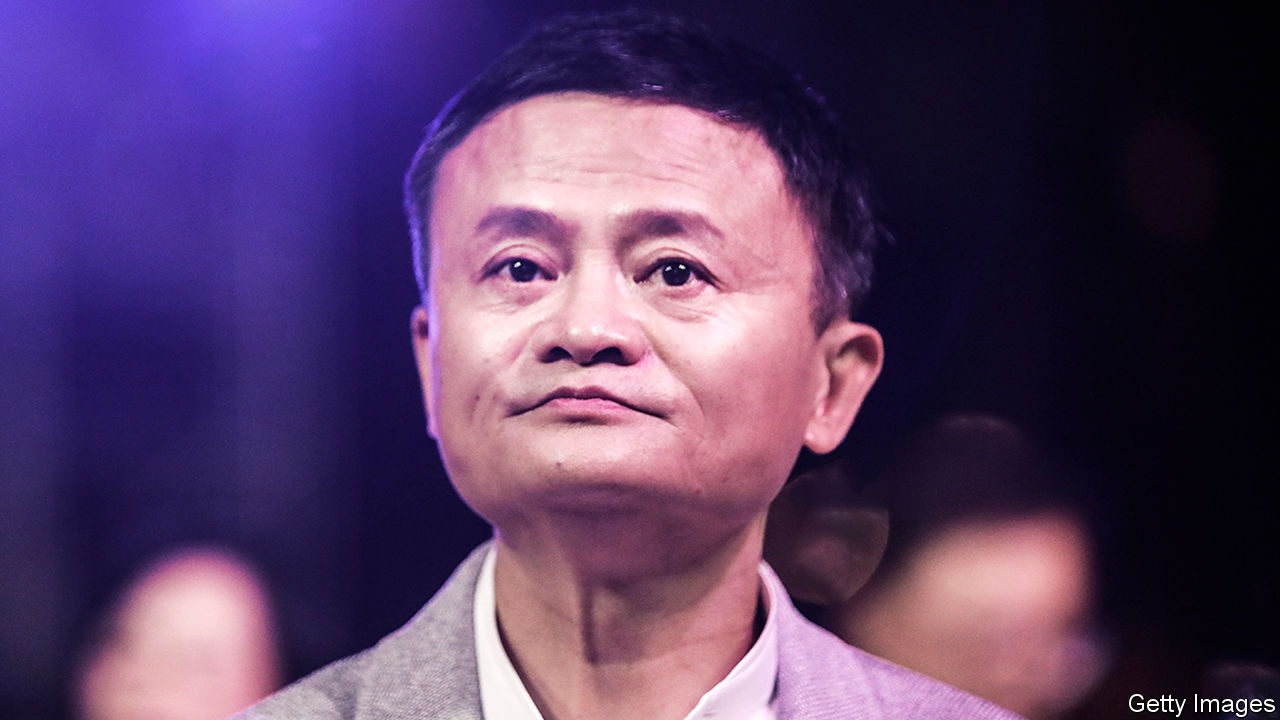 “ACTING ON INFORMATION, China’s State Administration for Market Regulation [SAMR] has started investigation [into] Alibaba Group for alleged monopoly conduct including implementing an ‘exclusive dealing agreement’.” This brief note, posted by Xinhua, the state news agency, on December 24th, was all it took to cut China’s mightiest online titan down to size. Not even the announcement three days later of an extra $6bn in share buy-backs arrested the slide in its market value. By December 28th it had fallen by 13%, or $91bn. By comparison, American regulators’ detailed charge-sheets against tech giants such as Facebook and Google in recent weeks elicited a yawn from investors.

Listen to this story

Your browser does not support the <audio> element.

Enjoy more audio and podcasts on iOS or Android.

The Alibaba investigation is the first of its kind into Chinese e-commerce. Its timing—a month after authorities suddenly halted the $37bn initial public offering (IPO) of Alibaba’s fintech affiliate, Ant Group, and days before regulators told Ant to curtail lending and wealth-management activities—hints it is China’s way of chastening the two firms’ flamboyant co-founder, Jack Ma.

That could be. Ant’s IPO was put on ice after Mr Ma likened China’s state banks to pawn shops. Chinese watchdogs often launch lightning crackdowns to deter others from misbehaving, says Angela Zhang of the University of Hong Kong. But the probe also signals concerns over the online economy, which is effervescent but also ever more concentrated. As investors parsed the Xinhua note, share prices of other internet giants, such as Tencent and Meituan, fell nearly as steeply as Alibaba’s.

The complaint against Alibaba centres on the practice of having merchants or brands sign contracts to sell products exclusively on its platform. Those that do business on rival marketplaces risk having internet traffic diverted from their online shopfronts on Alibaba’s Tmall emporium to other sellers.

Such arrangements aren’t new. In 2015 JD.com, a smaller e-emporium backed by Tencent, filed a legal claim against Alibaba over a similar issue. Nor are they unique to Mr Ma’s firm, which launched a competing complaint against JD.com the same year. These and other complaints since have been largely ignored by regulators. Why the about-turn?

Chinese trustbusters long resisted hobbling an industry seen as world-beating, and backed in Beijing. Now, as in the West, they fret that a few giants control indispensable services—e-commerce, logistics, payments, ride-hailing, food delivery, social media, messaging. Common practices, such as selling products below cost to lure customers, look more troubling in an industry where the top three firms control over 90% of the market than they would in a less concentrated one. In November SAMR said offering shoppers different prices based on their spending power, divined from user data, may be unlawful.

Another reason for China’s newfound zeal (Mr Ma’s jibes aside) is greater trustbusting capacity. SAMR was formed only in 2018, by combining the offices of three regulators. It still struggles to keep up with the fast-changing online market; most staff are busy assessing mergers and acquisitions. But it has more know-how and manpower than it used to—and looks eager to deploy them.

This article appeared in the Business section of the print edition under the headline “Mo money, Ma problems”

BT Group stock price slips as it faces a £600 million lawsuit for overcharging...

A master limited partnership is a venture that trades like a public company but...

Painful as it was, patience paid off for investors

Investors Diurnal Team - January 1, 2021 0
Good things came to fund investors who waited in 2020. But, what a terrifying wait it was. Mutual funds and exchange traded funds of all stripes delivered strong annual returns, even better than usual. Consider the largest fund by assets, a core holding of many 401(k) accounts. Vanguard’s Total Stock Market Index fund returned 19.5 percent, as of Dec. 22, more than double its average annual performance since 2000. But first investors had to withstand a 34 percent plunge from February into March. Only by resisting the urge to sell and sidestep the pandemic-caused panic would they have gotten that full return. Many investors unfortunately did not have the resolve or ability to hold on through that. Job losses, cash crunches and plain fear had many investors pulling out of stocks. For most of this year, investors pulled more money out of US stock mutual funds and ETFs than they put in. It’s a continuation of a yearslong trend as investors have steadily moved money out of stock funds and into bond funds. Bond funds, for their part, largely fulfilled their traditional roles as steadying forces for portfolios during stressful markets. They held up much better than stock funds early
Business

NYSE boots out Chinese telecoms firms—then it doesn’t, then does

Investors Diurnal Team - January 4, 2021 0
THE TIES that bind the world’s two biggest economies are unravelling, in fits and starts. The latest episode involved fits, starts and chaos. On December 31st the New York Stock Exchange (NYSE) announced that it would delist China Telecom, China Mobile and China Unicom, three telecoms giants, shares in which have been traded on Wall Street for years. It did so, it said, to comply with President Donald Trump’s executive order in November banning American investments in companies with links to the People’s Liberation Army (PLA). This set off a fit among their American shareholders. As the trio’s share prices swung wildly, funds scrambled to sell their stakes before the delisting, which the NYSE said would occur by January 11th. Speculation raged that CNOOC and PetroChina, state-run energy goliaths also listed in New York, could be next. Then came the start. Late on January 4th the NYSE declared it would not eject the firms after all. Those same funds faced the prospect of repurchasing the shares, the price of which had popped up on news of the NYSE’s U-turn. If that weren’t chaotic enough, two days later the NYSE changed its mind again. It would, after all, boot out
Business

Investors Diurnal Team - January 4, 2021 0
Move over, Beth Harmon.  The next classic game to win over major audiences in the manner of Netflix’s “The Queen’s Gambit” is the colorful 1980s fave, the Rubik’s Cube. Hyde Park Entertainment Group, helmed by prolific action flick producer Ashok Amritraj, 64, and Endeavor Content have teamed up to produce a feature film based on the three-by-three brain teaser, according to Variety. Priya Amritraj, Amritraj’s daughter and Addison Mehr are signed up to executive produce the movie, which does not yet have a public release date.  The movie follows the success of Netflix’s smash series starring Anya-Taylor Joy as checkmate prodigy Beth Harmon, which set off a surge in online chess games and a run on old-school playing boards. There’s also a Rubik’s-inspired TV game show in the works: Amritraj will executive produce the series along with Andrew Glassman of Glassman Media, a subsidiary of Endeavor that brought competition shows such as “The Wall” to NBC, and “Spin the Wheel,” hosted by Dax Shepard to Fox. Professor Ernő Rubik, inventor of Rubik’s Cube.AP It’s unclear whether the film will be in the style of “The Lego Movie,” where the toy itself is an anthropomorphic main character, or a feature about