America’s energy industry had been bracing for a potential shift away from the fossil-fuel-friendly Trump administration since last year. Then the Covid-19 pandemic hit, and President-elect Joe Biden’s potential actions affecting domestic oil-and-gas production seem to have lost their teeth in the near term. At the same time, his foreign-policy moves look more significant.

The extent to which Mr. Biden can push his clean-energy agenda will only become clear in January once the two pivotal Senate seats in Georgia are filled, but there are executive orders he can pursue without Congress on his side. Mr. Biden already has said he wouldn’t ban fracking outright, but he has called for ending its use on federally controlled lands.

A ban on new federal permits does have some potential for damage, though not any time soon. New drilling isn’t a priority for energy companies with prices and demand still depressed.

“It’s a very different discussion today than a year ago, when the U.S. was growing oil production one to two million barrels per day a year,” notes Scott Hanold, analyst at RBC Capital Markets. Even if West Texas Intermediate oil prices were sustained at $60 a barrel—they are around $40 today—annual oil production would be likely to grow somewhere around 300,000 barrels a day, “a far cry from the one to two million barrels per day you saw in 2018 and 2019,” he noted.

Instead, a more pressing near-term threat could stem from foreign policy. Mr. Biden favors returning to the 2015 Iran nuclear deal—a move that could bring the major oil producer sanctions relief. According to a research note from RBC, the White House has authority to issue enforcement waivers on sanctions without Congress if it certifies that Iran is meeting its nuclear deal obligations.

A move to sanctions relief could bring as much as a million barrels a day of supply, or about 1% of global production, back to the market in the second half of 2021, RBC notes. A research note from
Morgan Stanley
figures that number could be as much as two million barrels a day, though likely not all at once. There are many moving parts in the global oil market, but such a big addition to supply would harm private energy companies across the board. 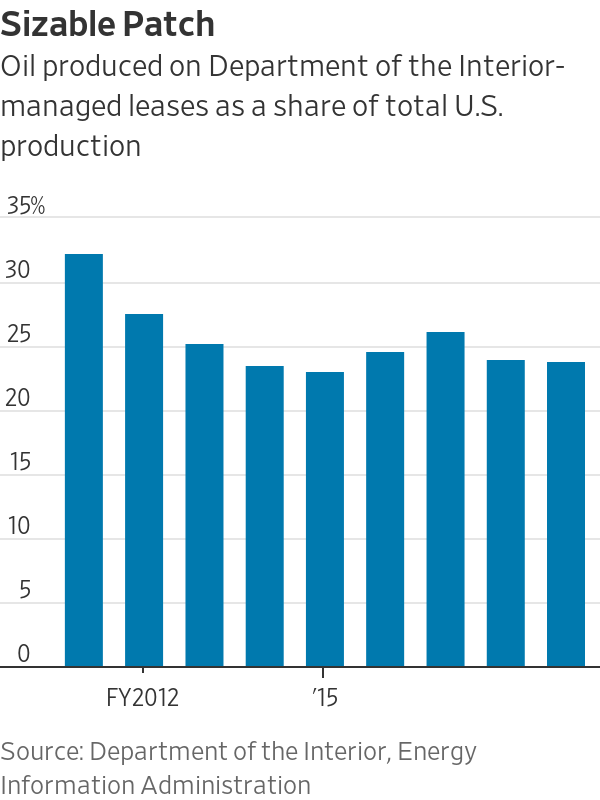 Domestic policy could have more of an impact in the long term. Federally controlled areas account for roughly one-quarter of all U.S. oil production. In places such as New Mexico, land ownership looks much like a checkerboard, with federal lands sitting adjacent to state and private acreage, notes Scot Anderson, partner at Hogan Lovells. That will make it a headache for producers with a heavy presence in those states to figure out permits, especially because most drilling today occurs horizontally. Moreover, royalty rates, the percentage of oil revenue that an energy company must share with the underlying landowner, are cheaper for federal lands than for state- and private-owned acreage.

Companies with higher exposure to federal lands, such as
EOG Resources
and
Occidental Petroleum,
already have experienced steeper drops in their share prices relative to peers since before the election when a Biden victory began to look likely. In some cases, the companies have used the downturn to hedge their exposure through consolidation:
Devon Energy’s
announced merger with
WPX Energy,
for example, reduces its exposure to federal lands. And if the U.S.-focused producers face incrementally higher costs because of new regulations, companies with heavy international exposure—for example, supermajors such as
Exxon Mobil
and
Chevron
—could find themselves in a marginally better position.

Mr. Biden’s clean-energy-focused agenda does have potential to shift the fortunes of energy companies—especially if he has Congress on his side. However, the effects might only show once the cloud of the pandemic lifts.

After military defeat, what's next for Nagorno-Karabakh?

Zoom, Delta, Moderna: What to Watch When the Stock Market Opens...

How to Buy a Home Together When You're Not Married

Investors Diurnal Team - November 3, 2020 0
As U.S. home sales rise to a 14-year high and families search for larger spaces in quarantine, more unmarried couples may be considering buying a house together. For them, there is a different set of risks, both financial and practical, to consider. The number of unmarried partners living together nearly tripled in the past two decades to 17 million, with a notable increase among those aged 65 or older, according to the U.S. Census Bureau. In turn, some financial advisers are getting more requests for advice from couples of all ages who want to buy a home together but have no interest in getting married. For example, Andrew Feldman, a financial planner in Chicago, recently received a call from one of his clients who is living with her boyfriend and his two children. They are running out of space and she intends to buy a house within a few weeks and have him pay rent to help cover the mortgage. While this would work out well for everyone in the short-term, it is risky because, on her current budget, it would be very difficult for her to