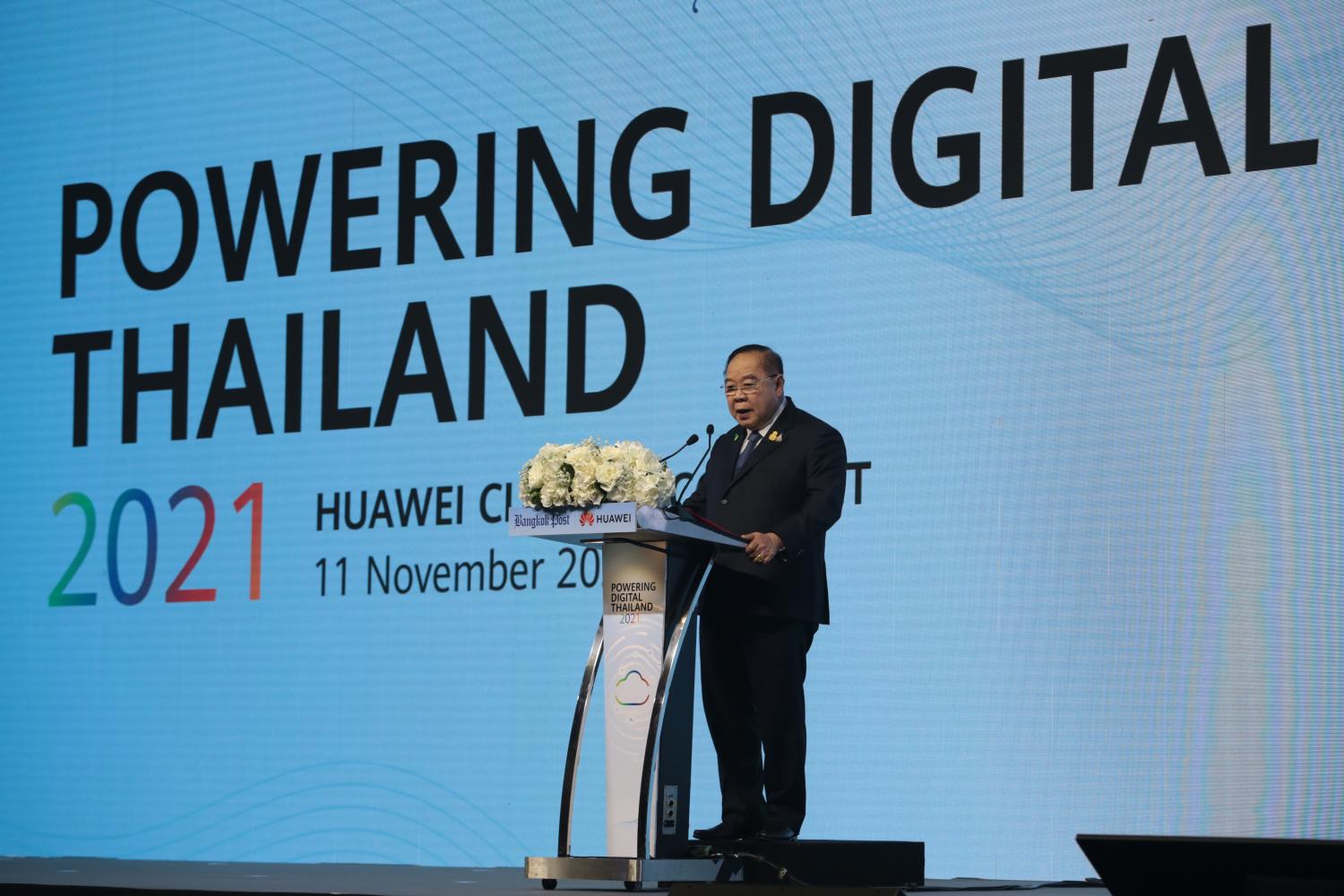 Thailand is setting its sights on boosting its digital infrastructure and creating an ecosystem that will position it as the digital hub of Asean, a seminar was told on Wednesday.

Technology is at the core of Thailand’s development as the country moves into the era of Thailand 4.0, Deputy Prime Minister Prawit Wongsuwon said. Thailand, he said, is developing its technological infrastructure to pave the way for becoming a digital hub in the region.

The deputy prime minister was presiding over the Powering Digital Thailand 2021: Huawei Cloud & Connect event co-hosted by the Bangkok Post and Huawei Technologies Thailand. The event is being held until Saturday at Convention B2, 22nd Floor, Centara Grand at CentralWorld. There, Huawei is presenting the latest Cloud, AI and 5G technologies all in one place. These technologies will increase value in various industries and stimulate the economy. More than 800 people attended the event yesterday.

“Thailand is one of the first countries in Asean that developed 5G technology for commercial use. Many areas in the Eastern Special Development Zone or Eastern Economic Corridor (EEC) have already adopted this technology. Digital technologies like 5G, Cloud and AI technologies are crucial infrastructure that can turn Thailand into the digital hub of the region,” Gen Prawit said.

The government recognised the importance of technological development, he said. It therefore drew up its Digital Economy and Society Development Plan in cooperation with the public and private sectors, he said. Its aim was to develop infrastructure, innovation, data, human capital and other digital resources that will ultimately drive the country towards stability, wealth and sustainability, Gen Prawit said.

He said Thailand is regarded as the first 5G mover in Asean in terms of 5G commercial services thanks to the 5G licence auction held on Feb 16. The mobile operators which won 5G spectrum licences are obliged to deploy their network in the EEC in the first year of their 5G services, he said.

He said he has assigned state telecom enterprise TOT to establish a new data centre in 2021 to capitalise on demand from the private sector. TOT is studying the details of the new data centre, including its data-handling capacity, he said.

He said the information is “new oil”, which serves as a critical factor for the internet economy era, particularly big data analytics. The Government Data Centre and Cloud Services (GDCC), operated by state telecom enterprise CAT Telecom, serves as a centralised state agency data and cloud service. He said GDCC began operating this year and was earlier expected to handle 8,000 virtual machines (VM), but demand from state agencies has reached close to 20,000 VM now.

“Huawei Technologies Thailand is set to establish its third data centre in Thailand in 2021 with an investment budget of 700 million baht. This is a good signal to boost Thailand’s potential as a digital hub,” said Mr Buddhipongse. “Thailand holds strong potential to become a di- gital hub in Asean.

”Our digital infra especially 5G networks has surpassed others in region, even Singapore,” he said. 5G commercial networks have been rolled out and the massive 5G adoption can be expected next year, he said. The government’s target of having 5G tech in EEC development is part of efforts to move towards the digital-driven economy.

Moderna’s Covid vaccine: What you need to know

Imran aims to bolster ties with Afghanistan during maiden visit

Most Covid-19 infected county in US to shut down restaurants, again

Investors Diurnal Team - December 1, 2020 0
The 'fan edition' phone for non-Samsung fans Galaxy S20 FE 5G is a go-to choice for newcomers to the brand This review hurts me personally because I paid a lot of money and got myself a Samsung Galaxy S20+ around mid-year. Now, the newly-released S20 FE 5G is cheaper, faster and has all the same Samsung features with a set of slightly inferior cameras at around half the price. I have owned or tried Samsung, Oppo, Apple, Sony, Motorola, Lenovo, HTC and OnePlus phones over the past decade and I can still say that in 2020 Samsung produces the most social-media-ready photos and videos with the least effort. Yes, the FE produces less-detailed shots compared to its big brothers (the Note20 Ultra & S20 Ultra, I mean) but what you see on social media is far less than what the FE can comfortably produce with ease. At about half the price, the FE can do 95% of what the S20+ does with all the bells and whistles, gimmicks and shooting modes intact. Samsung's AI helps to pick and adjust how you take your photos instantly. You can also zoom 3x optically as
Tech

Investors Diurnal Team - October 1, 2020 0
A Google sign is shown at one of the company's office complexes in Irvine, California, on July 27, 2020. (Reuters photo) BRUSSELS: Alphabet's Google plans to pay $1 billion to publishers globally for their news over the next three years, according to its chief executive officer, a step that could help it win over a powerful group amid heightened regulatory scrutiny worldwide. News publishers have long fought the world's most popular internet search engine for compensation for using their content, with European media groups leading the charge. CEO Sundar Pichai said the new product called Google News Showcase would launch first in Germany, where it has signed up German newspapers including Der Spiegel, Stern, Die Zeit, and in Brazil with Folha de S.Paulo, Band and Infobae. It will be rolled out in Belgium, India, the Netherlands and other countries. About 200 publishers in Argentina, Australia, Britain, Brazil, Canada and Germany have signed up to
Tech

Investors Diurnal Team - November 3, 2020 0
Tunisian startup Cure Bionics are developing a prototype of an artificial hand, which they hope will be more affordable to help amputees and other disabled people. SOUSSE, Tunisia: A Tunisian startup is developing a 3D-printed bionic hand, hoping the affordable and solar-powered prosthetic will help amputees and other disabled people across Africa. Unlike traditional devices, the artificial hand can be customised for children and youths, who otherwise require an expensive series of resized models as they grow up. The company Cure Bionics also has plans to develop a video game-like virtual reality system that helps youngsters learn how to use the artificial hand through physical therapy. Mohamed Dhaouafi, the 28-year-old founder and CEO of Cure Bionics, designed his first prototype while still an engineering student in his home city Sousse. "One team member had a cousin who was born without a hand and whose