DISNEY PROMISED investors in spring 2019 that a new video-streaming service would win between 60m and 90m subscribers by 2024. Disney+ has outperformed that forecast spectacularly, hitting its five-year subscriber target in just eight months. In doing so it is fulfilling the digital-transformation plan set in motion three years ago by Bob Iger, Disney’s longtime boss, now its executive chairman.

Marketing muscle, crucial to success, has been backed up by “The Mandalorian”, a space western inspired by “Star Wars”. Such is its popularity that Disney was late meeting demand for a plush-toy of its baby Yoda character. The pandemic added a turbocharge, dashing fears that Disney+ and other new streaming services, like HBO Max and Apple TV+, might struggle to attract time-starved consumers. Lockdowns mean extra hours to while away, notes Tim Mulligan of MIDiA Research.

Amid school closures Disney+ has been as trusty a baby-sitter as baby Yoda’s nurse droid. Of all the new streaming services Disney+, which launched in western Europe in March, just as lockdowns began, is the clear winner. Even so it has not touched the leader, Netflix, which has 195m subscribers worldwide and over 70m in America alone (see chart). 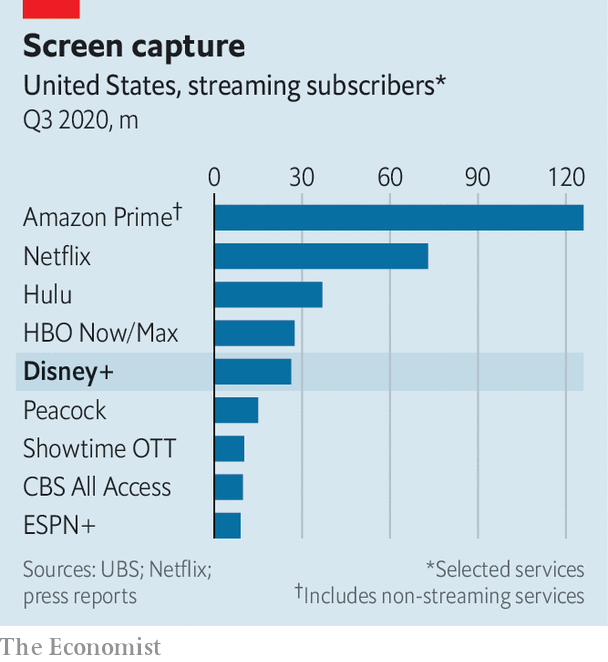 Disney’s other businesses have suffered because of the pandemic. Shuttered theme parks, closed cinemas and cancelled sporting events have taken their toll. In August Disney said covid-19 wiped out $3.5bn of operating profits at its parks, experiences and products division in three months. The company is expected to report another quarterly loss on November 12th, after The Economist went to press. Yet the streaming service’s subscriber gains have helped shield the firm’s share price. It has fallen but by far less than its peers.

Disney+’s rapid success also underlines a doubt about the firm—whether Mr Iger’s choice of successor was correct. The favourite for the top job was Kevin Mayer, who designed and launched Disney+. Mr Iger chose Bob Chapek, a talented operating executive who had been running theme parks. “Given the runaway success of Disney+ it is even harder to understand how the theme park and home-entertainment executive got the top job,” says Rich Greenfield of LightShed Partners, a research firm. Mr Mayer left Disney this summer.

Will Mr Chapek now bet heavily on Disney+? The firm as a whole lavishes nearly $30bn a year on original and acquired content but this year set aside only $1bn for Disney+. Netflix spends $15bn a year. The Disney service’s rich library is enough to keep under-tens engaged but it may lose subscribers unless it regularly offers original grown-up fare. Third Point, an activist investor, wants Disney to stop its dividend and spend the $3bn a year on Disney+.

Disney could do more than that if it went “all-in” on streaming, dropping its current system in which, for example, big-budget films go exclusively to cinemas, and putting everything it makes onto Disney+ at once. The service could then spend as much as Netflix and raise its price from $6.99 per month to over $10.

This would make for a huge global business but there is a danger that it would swiftly cannibalise the existing parts of Disney’s empire. A more likely course is that Disney will move new content more rapidly onto Disney+. It could also combine Disney+ with Hulu, a separate and successful video-streaming service the firm took control of last year.

Disney is expected to announce in December that it will spend a lot more on content for the service. All eyes will be on whether Mr Chapek seems as tuned-in to streaming’s bright future as Mr Iger was. ■

Small Business Saturday more important than ever amid COVID-19

Judge who sent Musharraf to gallows dies of coronavirus

Investors Diurnal Team - November 22, 2020 0
A years-long financial feud between disgraced American Apparel founder Dov Charney and his former hedge-fund ally Soo Kim is getting personal. After years of trying and failing to collect on a $20 million loan to Charney from 2014 — part of an unsuccessful bid to keep the scruffy American Apparel CEO in his post amid sexual misconduct claims — Kim is now going after Charney’s family in an effort to seize his assets, according to sources and court documents. “The goal is to make Dov’s life miserable” and take over Los Angeles Apparel, the company he started after he was forced out of American Apparel, a source with knowledge of the case told The Post. Lawyers for Kim’s Standard General hedge fund will depose Charney’s dad Morris Charney, a Harvard-educated architect from Quebec, via teleconference on Jan. 7, sources said. They have already deposed Charney’s uncle, Moshe Safdie, the architect behind the National Gallery of Canada art museum in Ottawa, court documents show. At issue is Charney’s assets — or apparent lack thereof. The new company is owned by his dad via a trust, and Charney’s only other asset appears to be a 20-room house in the Silver Lake neighborhood
Business

Investors Diurnal Team - November 25, 2020 0
Barnes & Noble has concluded that a cyberattack against its computer systems last month didn’t compromise customer data — even as publishers worry the aftereffects could muck up book distribution during the crucial holiday season. In an exclusive interview, B&N CEO James Daunt said the giant bookseller now believes the data breach it disclosed in mid-October was the result of an odd “ransomware” attack — odd partly because the hackers never demanded a ransom. Cybersecurity experts told the company the breach had all the earmarks of such attacks, which typically come from Russia, Ukraine and other Eastern European countries. It remains ­unknown where the attack originated, Daunt said. “We had a cybersecurity attack and when we detected that, we just shut everything down,” Daunt told Media Ink. “We decided to act with extreme caution and notify customers.” On the positive side, the bookseller’s boss said the company’s cybersecurity experts found “zero customer data was compromised.” They eventually determined that the hackers gained access to B&N’s systems through a network used by publishers known as the Electronic Data Exchange (EDI). On the negative side, the investigation disrupted B&N’s systems from late October into early November. “We brought it [EDI] back very
Business

Investors Diurnal Team - November 17, 2020 0
The recovery in US retail sales slowed last month as consumers confronted a surge in coronavirus infections and a lack of government aid to see them through the pandemic. Retailers’ total sales rose just 0.3 percent to about $553 billion in October following September’s 1.6 percent growth, the US Census Bureau said Thursday. That fell short of economists’ expectations for a 0.5 percent jump despite marking the sixth straight monthly increase since COVID-19 gutted retailers in March and April. The recent resurgence of the virus could pressure the industry yet again as some cities and states bring back lockdowns that kept shoppers out of stores this spring. Expanded unemployment benefits and other stimulus measures that had helped boost spending have also run dry with no new aid package insight. “Whether this represents the start of a negative turn in consumption — either due to rising COVID cases or the potentially millions of unemployed workers reaching the end of their CARES Act savings — remains to be seen,” said Chris Long, chief economist and vice president of research at the National Association of Federally-Insured Credit Unions. October’s total sales were 5.7 percent above where they were a year ago. But certain