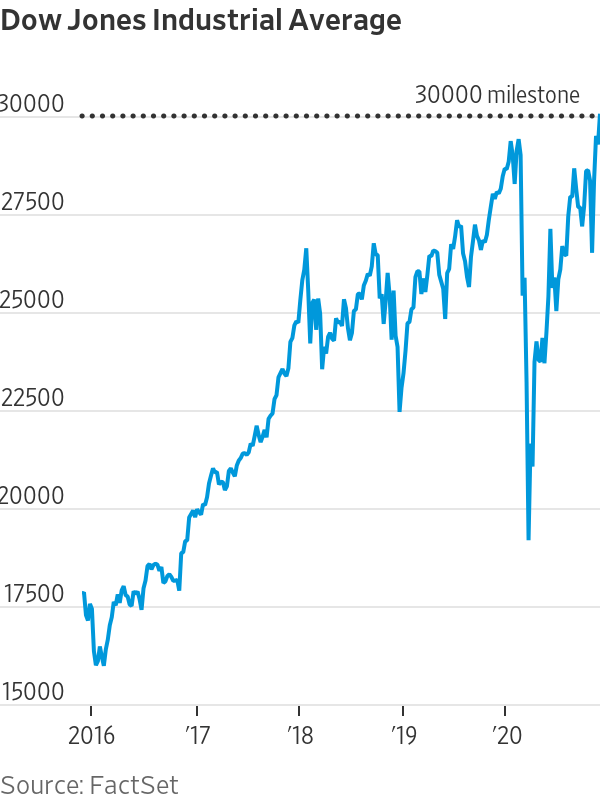 The Dow Jones Industrial Average vaulted above 30000 for the first time, a remarkable rally that has lifted the stock market to records even in the midst of a devastating pandemic.

The blue-chip index rose 1.5% to finish at 30046, a roughly 60% climb from its March nadir. It flirted with the level throughout the morning, coming just shy of crossing it several times before breaking through.

Tuesday’s advance came after President Trump said the administration would cooperate with President-elect Joe Biden’s move to the White House, giving investors hope that the country would be able to have a smooth transition of power. But more broadly, much of the market’s rise in recent months has been powered by building hopes among investors that scientists are on the brink of pushing out vaccines effective enough to fight the novel coronavirus.

The Dow Jones Industrial Average reached a milestone of 30000. WSJ’s Jason Bellini explains how we got here and what the 30000 figure tells us about the state of the stock market. Photo: NYSE[object Object]

News of potential vaccines comes at a key juncture for the U.S. The country has reported a record number of coronavirus cases in the past week. The holidays are also approaching, meaning many Americans will soon be deciding whether to travel and gather indoors with friends and relatives.

The combination had many investors gearing up for a long and rocky path ahead for the economy.

Still, vaccine disclosures have come this month from biotech firm Moderna Inc., pharmaceutical companies
Pfizer Inc.
and
BioNTech SE,
and
AstraZeneca
PLC and the University of Oxford, giving money managers a new shot of confidence. All three groups have developed vaccines that have shown promise in protecting people against the novel coronavirus. 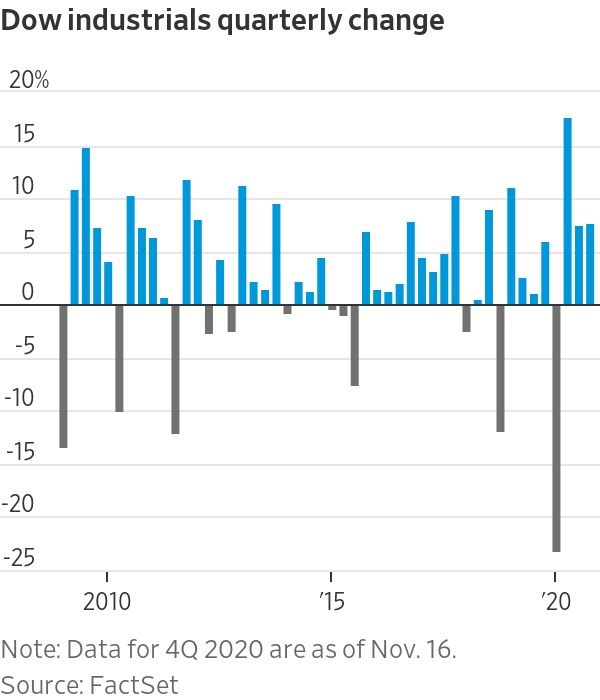 Although most are still expecting some setbacks, including the potential for some people to refuse to take the vaccine or supply-chain issues that might hinder distributing the vaccine, investors say the overall picture looks better than it did in the spring.

“We’ve been a believer in human ingenuity from the outset,” said Mike Stritch, chief investment officer and national head of investments for BMO Wealth Management.

“Everyone is betting on some progress this year, and that’s our base case, too,” he said, adding that his firm has this year mostly concentrated clients’ portfolios in shares of large U.S. companies while trimming positions in riskier emerging-market debt and noninvestment grade holdings.

The market’s comeback from its March low seemed implausible at first. Stocks climbed even as lockdowns aimed at slowing the coronavirus’ spread forced employers to lay off millions of workers, decimating industries from hospitality to retail to entertainment.

More recently, though, the U.S. economy has shown signs of revival. As some of the most hard-hit states in the early stages of the pandemic ventured out of their lockdowns, a measure of manufacturing and services activity rose for a sixth straight month, data firm
IHS Markit
said in November. Home sales surged to a new 14-year high in September, buoyed by rock-bottom mortgage rates that drew in buyers. And retail sales data have shown Americans boosting their spending on vehicles, clothing and other goods, an encouraging sign, although overall expenditures have remained below pre-pandemic levels.

The economy isn’t out of the woods yet. And the U.S. isn’t clear of the pandemic, either. In the coming months, the U.S. faces multiple threats as millions of students return home from college, families gather for the holidays and flu season progresses.

It isn’t yet known “how long we will still have to fight with the virus, how serious the overall economic consequences in the longer run will be, what kind of vaccines could be made available to a wide public, and by when,” said Tatjana Puhan, deputy chief investment officer at TOBAM.

Nevertheless, investors betting on stocks’ comeback say the market’s surge is indicative of several things: faith that front-runners in the race to develop coronavirus vaccines are closer to a final product, confidence that the emergency measures the Federal Reserve put in place this year have stabilized the financial system, and ultimately, hope that the economy will be able to continue its long recovery. President-elect Joe Biden also named a Covid-19 advisory board this month and pledged to spare no effort to stop the pandemic. 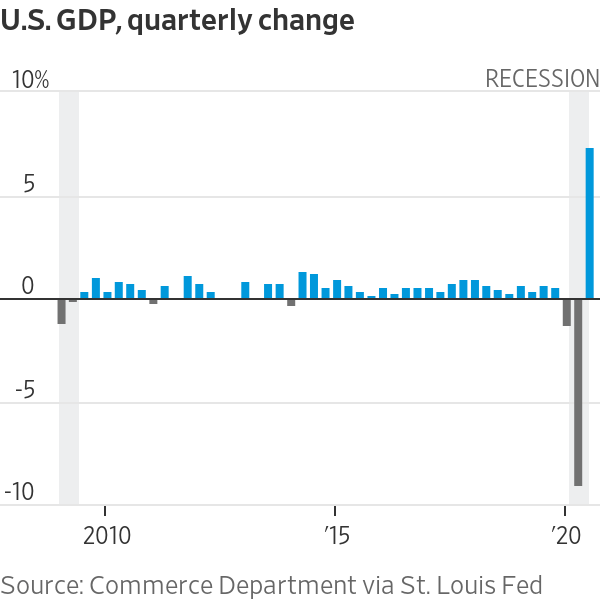 The reason for the disparity: technology stocks.

Much of the market’s rebound since March has been powered by shares of fast-growing companies.
Amazon.com Inc.,
Apple Inc.
and
Netflix Inc.
are each up more than 45% for the year.

The gap between the market’s haves and have-nots points to just how split the economic recovery from the pandemic has been, investors said.

Many technology firms have enjoyed robust growth throughout a turbulent period for the broader economy, with Amazon reporting record sales for the third quarter thanks to a surge in online shopping and Alphabet posting a rise in digital advertising revenue for the July-through-September period.

In contrast, companies in industries that have been hit hard by the losses stemming from the pandemic—such as the airline sector, bricks-and-mortar retail and hospitality—have, even with Monday’s rally, continued to lag behind the market.
American Airlines Inc.,
for instance, is down 48% for the year, while
Macy’s Inc.
has fallen 36%.

“The indexes on the whole are recovering nicely, but within the underlying sectors, there’s still a significant dispersion between winners and losers,” said Jim Baird, chief investment officer of Plante Moran Financial Advisors.

Mr. Baird said his firm, wary of the potential for a pullback in growth stocks, has begun to tilt more of its investments toward areas of the market that haven’t led the rally, such as small-caps, international stocks and value.

“There’s that risk of investors piling into a shortlist of names at almost any price and ignoring the other stocks, other businesses,” Mr. Baird said.

Many investors have been drawn to faster-growing technology companies because they see few other alternatives in an economic environment characterized by low growth, interest rates and inflation, said Brian Levitt, global market strategist at Invesco. The opposite economic scenario typically benefits value stocks. That group often includes retail, energy and financial stocks, many of which trade at low valuations compared with their earnings.

“For investors to look to start thinking about other parts of markets, you need a sustained recovery,” Mr. Levitt said. Right now, the economy is still in its early stages of rebuilding, he added.

What could derail the recovery?

Many of the fears that investors had in past years, such as U.S.-China trade tensions or a central-bank policy misstep, seem to have taken a back seat to the pandemic. For now, some investors and analysts say their primary concern is that the coronavirus spreads so much over the winter and spring that states are forced to shut down their economies again, as has been the case throughout parts of Europe.

Even that risk is difficult to assess, though.

“Look at what we’ve gone through over the last six months. The news just changes so rapidly,” Mr. Baird said, adding that he has generally advised his clients to stick to making longer-term investment decisions, instead of trying to trade off the latest headlines.

What brings comfort to many is the general sense that, compared with March, things have improved.

“Hopefully we’ve learned a thing or two,” said Invesco’s Mr. Levitt. “This recovery is going to happen with some fits and starts, but ultimately, I think we’re setting the stage for what will be the start of a long cycle.”

Write to Akane Otani at akane.otani@wsj.com

Rudy Giuliani said to have discussed a pardon with Trump

Apple, Eli Lilly, Pfizer, Facebook: What to Watch When the Stock...

Investors Diurnal Team - November 24, 2020 0
They gather unloved in jars and under cushions, unearthed only when laundry needs doing. They rattle in coat pockets, music to some ears and a nuisance to others. They sink into fountains and lurk in wells, a fortune in wishes but a nightmare to sort and count.Coins are everywhere until they’re nowhere, and at the moment they’re hard to find. By upending normal habits, the pandemic has dropped them out of circulation and accelerated a trend toward cards, apps and other cashless payments that could eventually make coins obsolete.China has plans for a digital currency, and the U.S. Federal Reserve is doing “research and experimentation.” Facebook has a currency in the works, and Bitcoin’s evangelists are still preaching. Millions of Americans are skipping right over coins by paying with their phones — or shopping on them.“There’s a battle for the future of money going on,” said Alex Tapscott, a co-founder of the Blockchain Research Institute, a Canadian firm. Governments, banks, credit card companies and online communities are among the factions trying to change how people make payments, he said.“As for cash,” he added, “an elegy is in order.”How the coronavirus sidelined coinsA funeral for cash has not yet been scheduled,
Economy