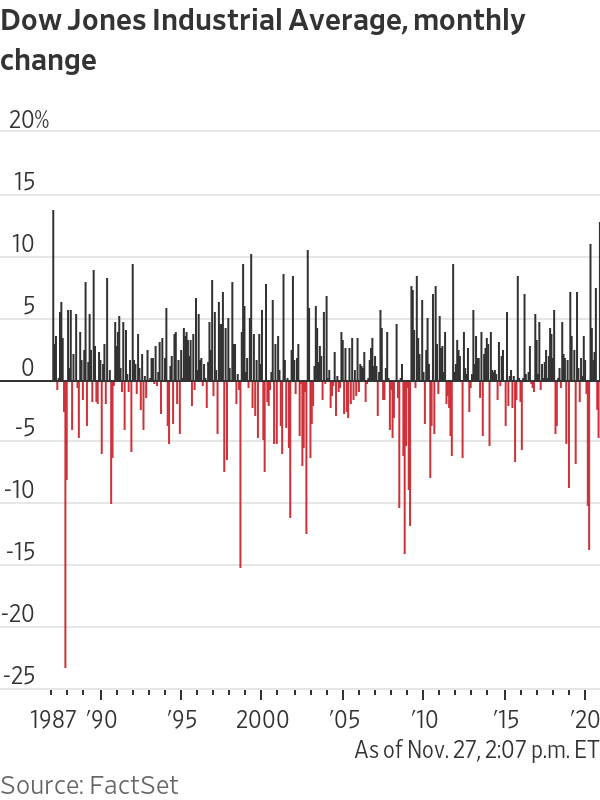 U.S. stocks are on track to complete a banner November, giving the Dow Jones Industrial Average its best month in over 33 years, as investors cheer the prospect of Covid-19 vaccines halting the pandemic and fresh stimulus spending to bolster the economy.

Futures tied to the Dow ticked down 0.4% Monday, signaling that the blue-chips index will enter the final trading session of November down about 140 points. The benchmark was up roughly 12.9% month-to-date by the end of Friday. 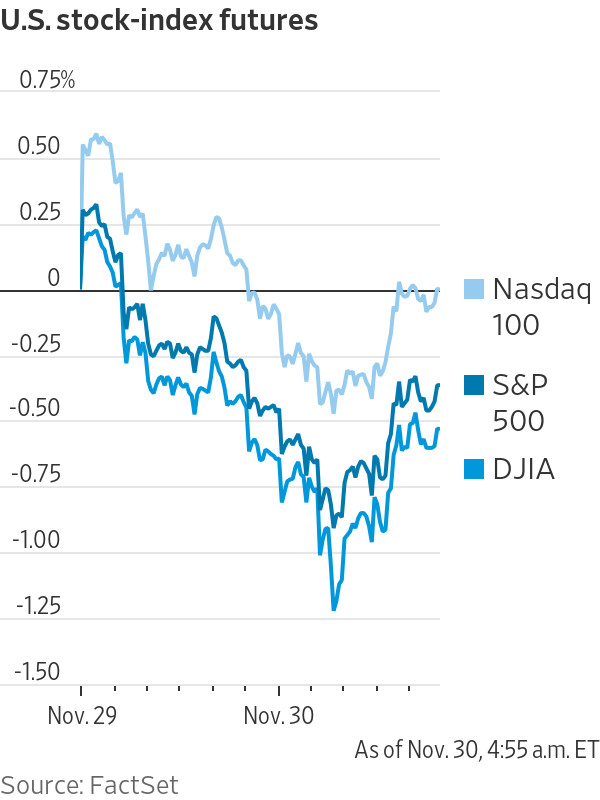 Contracts linked to the S&P 500 slipped 0.2% at the start of the week, though the broad index remains on track for what may be its biggest one-month advance since April. Futures for the Nasdaq-100 index edged up 0.1%, suggesting technology stocks will outperform.

Stocks have soared in November, at one point pushing the Dow over 30000 for the first time and putting the benchmark on course for potentially its biggest one-month advance since January 1987. Shares in companies that had suffered most from the pandemic, such as energy producers and banks, have posted steep gains.

The Russell 2000 index of small-cap stocks is also on pace for its best month in data going back to 1987.

Two main factors have fueled the latest leg up in markets, according to investors. The development of three vaccines in the West has opened up the possibility that the economic disruption caused by the coronavirus will end in 2021. Signs that President-elect Joe Biden will make a relatively smooth transition into the White House have doused some of the political uncertainty that had fed into heightened market volatility in the fall.

Ahead of the bell in New York, Moderna jumped over 13%. The drugmaker said it would ask U.S. and European health regulators on Monday to authorize use of the company’s Covid-19 vaccine.

Shares in
IHS Markit
rose more than 7% in premarket trading after the data provider said it would combine with S&P Global in a deal that values IHS Markit at $44 billion, including debt. The all-stock deal is the largest of the year.

The looming rollout of vaccines is likely to keep stocks on an upward trajectory in the final weeks of the year, investors and analysts said.

The surge of coronavirus infections in the U.S. and the possibility for logistical hiccups in the distribution of the shots could lead to bouts of selling. Still, money managers expect investors to view any declines as a buying opportunity.

“We’ve got a lot of very good vaccine news,” said Daniel Morris, chief market strategist at BNP Paribas Asset Management. “We should, for the most part, move up between now and the end of the year, with a chance for a setback here or there.

The Dow Jones Industrial Average reached a milestone of 30000. WSJ’s Jason Bellini explains how we got here and what the 30000 figure tells us about the state of the stock market. Photo: NYSE[object Object]

One risk for stocks in the coming months stems from exuberance among individual investors, said Trevor Greetham, head of multi asset at Royal London Asset Management, pointing to surveys by the American Association of Individual Investors. Still, the U.K. asset manager is betting that a revival in economic activity will continue to buoy stock prices in 2021. 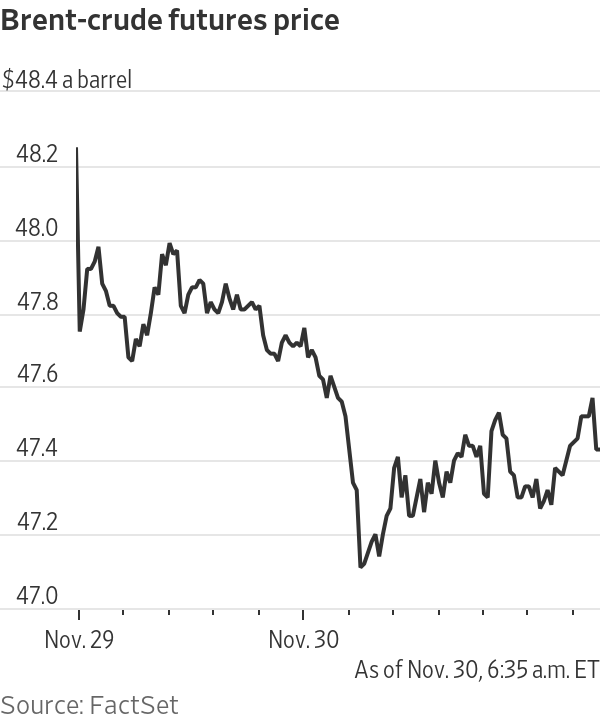 Bitcoin extended its volatile run, rising around 6% to $19,318. The digital currency’s runup in recent weeks has been driven by a new group of buyers seeking the opportunity for big profits.

Brent-crude futures were almost flat at $48.26 a barrel. Ministers from the Organization of the Petroleum Exporting Countries and its allies will make a decision on whether to go ahead with plans to boost to production in January at meetings Monday and Tuesday.

Traders broadly expect the cartel to extend output curbs into 2021 to bolster prices amid surging virus cases in the U.S. and restrictions on travel in Europe.

In Asia, investors were rattled by a Reuters report that the Trump administration is poised to add oil producer Cnooc and chip maker
Semiconductor Manufacturing International
to a blacklist of alleged Chinese military companies. Cnooc shares tumbled 14% in Hong Kong, while SMIC’s Hong Kong-listed stock fell 2.7%.

Markets are concerned about more restrictions from the U.S. on investing in Chinese companies, according to Steven Leung, executive director of institutional sales at UOB Kay Hian in Hong Kong.

“Some investors would rather stay on the sidelines awaiting more clarity on vaccine developments and U.S. policy directions as the nation transits to new leadership,” Mr. Leung said.

Banks and energy producers dropped in Europe, weighing on the Stoxx Europe 600, which edged up 0.1%. Shares in
UniCredit
fell almost 4% on reports that the board was holding talks about governance at the Italian bank.

—Joanne Chiu contributed to this article.

Write to Joe Wallace at Joe.Wallace@wsj.com

Investors Diurnal Team - November 14, 2020 0
President-elect Joseph R. Biden Jr.’s first economic test is coming months before Inauguration Day, as a slowing recovery and accelerating coronavirus infections give new urgency to talks on government aid to struggling households and businesses.With a short window for action in the lame-duck congressional session, Mr. Biden must decide whether to push Democratic leaders to cut a quick deal on a package much smaller than they say is needed or to hold out hope for a larger one after he takes office.A continued standoff over aid could set the stage for sluggish growth that persists long into Mr. Biden’s presidency. Republican and Democratic leaders remain far apart on the size and contents of a rescue package, though both sides say lawmakers should act quickly.Mr. Biden has until now sided with top Democrats in Congress. A Biden transition adviser said Friday that he had begun to have conversations with lawmakers about what a lame-duck package should look like.The shifting dynamics of both the pandemic and the recovery are complicating the debate. Even as it has slowed, the economy has proved more resilient than many experts expected early in the coronavirus outbreak, leading Republicans, in particular, to resist a big new dose
Economy

HSBC to quit retail banking in the United States

Investors Diurnal Team - November 30, 2020 0
HSBC Holdings plc (LON: HSBA) has been struggling to compete well with the big fish in the United States for a while. In a report on Saturday, Financial Times said that the largest European bank was now planning on quitting retail banking completely in the United States. At £4.04 per share, HSBC is currently more than 30% down year to date in the stock market. Shares of the British multinational investment bank had plummeted to as low as £2.83 in the last week of September. HSBC had started the year at a per-share price of £5.95. Are you looking for fast-news, hot-tips and market analysis? Sign-up for the Invezz newsletter, today. HSBC is yet to make an official announcement about such plans The report also said that HSBC’s senior management was expected to present the plan and seek approval from its board in December. The investment bank has not yet made an official statement on Financial Times’ report.  HSBC published its financial report for the fiscal third quarter in the last week of October that highlighted a massive 54% decline in its net profit. HSBC recently acknowledged financial challenges that it said were further aggravated this year due to the
Economy