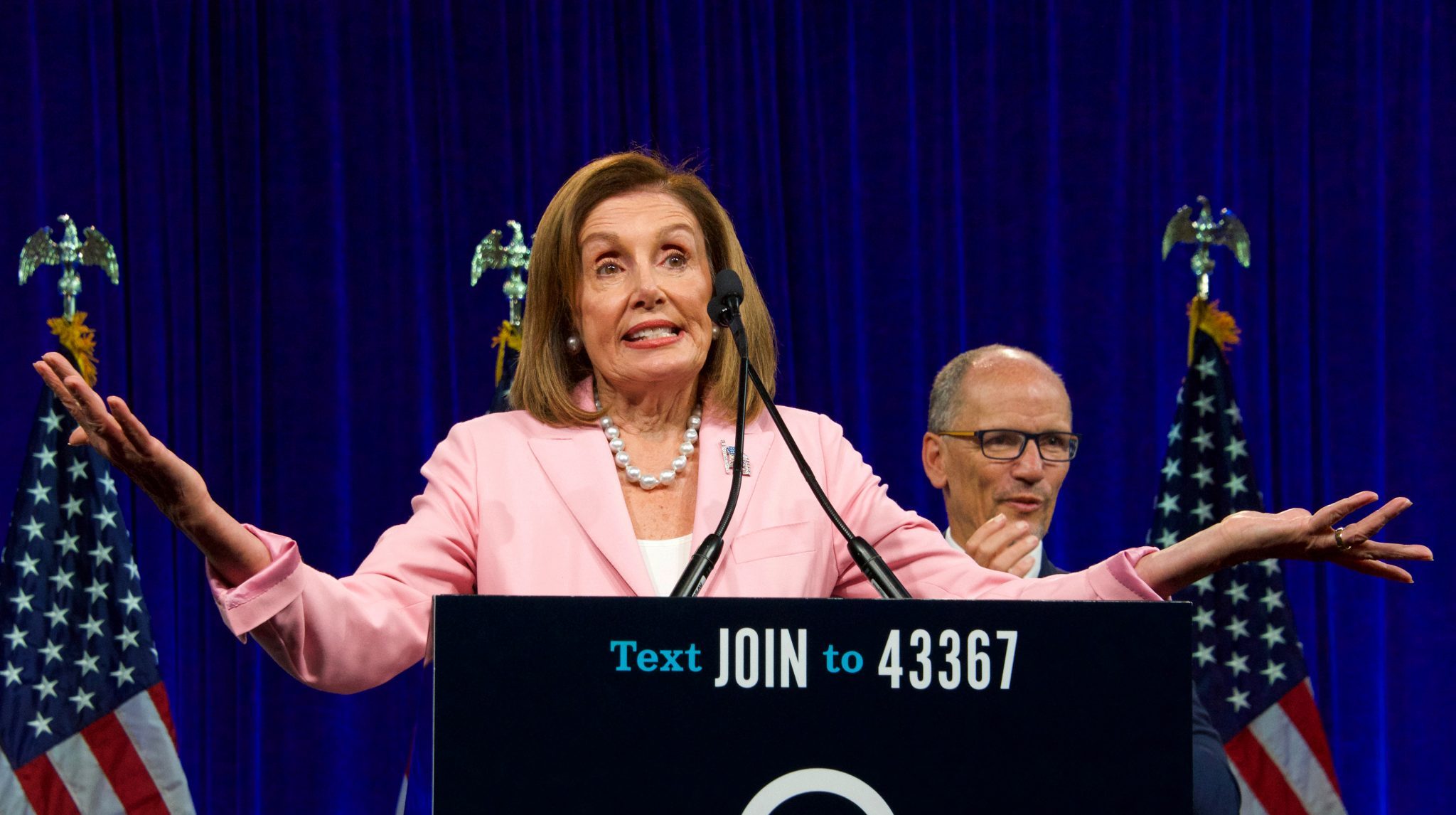 Contrary to most predictions, Election Day brought no blue wave. While former Vice President Joe Biden won the presidency, it looks like the Republicans will keep the Senate. Even more surprisingly, the Democrats appear to be on the verge of losing as many as 13 seats in the House of Representatives. If this proves to be the case, it would be the smallest House majority for any party since 1919.

The electorate’s rejection of the Democratic agenda in the legislature actually makes it somewhat surprising that the Democrats won back the White House. As a result, the blame game is afoot among our friends on the left.

Those in the progressive wing of the Democratic party are accusing their more moderate colleagues of being inept at running campaigns, while the relatively few centrist Dems are complaining about their progressive colleagues’ open embrace of socialism.

Yet it’s possible that the problem is precisely that traditional Democrats have not done enough to put as much light as possible between them and the party’s progressives.

While serious people acknowledge the real problems that infect today’s criminal justice system, for example, sloganeering to “Defund the Police” scares away more than a few voters. Further, use of the word “socialism” cannot but hurt Democrats outside of college towns and upscale urban locales such as Brooklyn.

Reporting on comments made by Democratic Rep. Vicente Gonzalez of Texas, the New York Times wrote, “The ‘average white person,’ Mr. Gonzalez added, may associate socialism with Nordic countries, but to Asian and Hispanic migrants it recalls despotic ‘left-wing regimes.’ ” Exactly. And House Democrats’ uncritical embrace of the Green New Deal likely stirred justified worries among voters about the astronomical future costs of their energy bills.

Voters also understand that because Speaker of the House Nancy Pelosi, D-Calif., believed a blue wave was inevitable, she refused to compromise and accept a deal offered by the White House for a second stimulus agreement. She couldn’t accept less than her $2.2 trillion deal, which included proposals with many of the traditional Democratic handouts to special interests.

Despite her insistence that pesky Republicans are to blame for not letting her have her complete way — and despite many in the traditional media echoing her self-serving message — voters understand that half a stick of gum is better than no gum at all, and thanks to Pelosi, no gum is exactly what they got.

Voters are often rationally ignorant; however, some of them still may have noticed the slew of House votes that would leave them with less money in their bank accounts, less control of their lives and higher cost-of-living expenses for years to come. As the Wall Street Journal reminded us this week, House Democrats “voted for huge new tax increases, vast new spending, a gradual end to fossil fuels, and the most radical labor agenda since 1935.”

For more evidence that the voters’ lack of enthusiasm for progressive policies likely explains the Democrats’ reduced majority in the House, one should consider this election’s down-ballot outcomes. Illinois and California, two of the most progressive states in the Union, provide good examples. In Illinois, voters rejected by a 55 to 45 percent margin the so-called Fair Tax Amendment. That progressive tax scheme would have amended the state constitution to replace the flat income tax with a progressive one.

In California, some serious progressive dreams to steal more freedom from people were crushed. Proposition 22, for instance, saved Californians from an attempt by regulators to upend the digital platform economy by forcing the industry’s companies to reclassify independent contractors as full-time employees. Voters disallowed cities to impose rent control and rejected a massive property-tax increase with Prop. 15.

In more fiscally sound states, voters took some power away from the legislature. For instance, Colorado voters adopted Prop. 117, closing a loophole in the state’s Taxpayer’s Bill of Rights, which subjects tax hikes to voter approval but not fees.

Sure, on election night, it wasn’t all sunshine and free-market victories. Voters also approved bad policies, such as Florida’s minimum wage increase to $15 per hour and spending initiatives all over the country, even in states where they rejected tax increases.

But the overwhelming message from election night is unmistakable: Americans are nowhere close to swallowing the false promises and absurd fantasies of the radical Left.

Coronavirus: France finds Covid-19 in mink at one farm – Ministry

Is the attention economy is being captured by virtual eyeballs?

Investors Diurnal Team - November 23, 2020 0
LONDON: The experimental Covid-19 vaccine developed by AstraZeneca and Oxford University would have a higher efficacy rate if trials were only measuring whether the shot prevents hospitalisation and severe disease, Oxford's vaccine chief said on Monday.Speaking in a briefing, Andrew Pollard, director of the Oxford Vaccine Group, said it is hard to explain the different efficacy rates between the AstraZeneca/Oxford shot and the other vaccines developed by Pfizer and BioNTech and one by Moderna.Pfizer-BioNTech and Moderna late-stage studies showed efficacy of more than 90%, while the British shot was on average 70% effective after testing its efficacy for all levels of the disease from severe to mild.One reason may be that the companies are measuring for different things, Pollard said.There may also be real differences between all the vaccines, he said.
World News

What Can Be Done for Michael Flynn?

Investors Diurnal Team - November 16, 2020 0
Army Lt. Gen. Michael Flynn has been entrapped, prosecuted, and persecuted. He pled guilty to lying to the FBI in an interview that was set up to corner him into a lie. Now, with President Trump having lost the election to former vice president Joe Biden, the stage is set. But for what? Sidney Powell, Flynn’s lawyer, met with President Trump in September and asked him to not pardon Flynn. Flynn evidently doesn’t want a pardon because it carries the stigma of guilt, which Flynn vehemently denies despite his guilty pleas which were reportedly extracted under threat of prosecution of his son. How Flynn reached this awful point is a lesson in FBI misconduct, abuse of power by former special counsel Robert Mueller’s team, and misconduct by the trial judge, Emmet Sullivan of the U.S. District Court for the District of Columbia. It goes back much farther — and higher — than that. Flynn’s career began when he was a new second lieutenant in 1981. He served in intelligence positions, continuing to distinguish himself. In April 2012, about a year after Osama bin Laden was killed in a raid by Navy SEALs, Flynn was nominated to become the director of
World News

Investors Diurnal Team - November 19, 2020 0
JERUSALEM: US secretary of state Mike Pompeo said on Thursday that the US will regard the Palestinian-led boycott movement as "anti-Semitic" and cut off government support for any organizations taking part in it, a step that could deny funding to Palestinian and international human rights groups.Pompeo announced the initiative during a visit to Israel in which he is expected to make the first-ever appearance by a secretary of state in an Israeli settlement in the occupied West Bank. Pompeo said he would visit the Golan Heights, which Israel seized from Syria in the 1967 war, another first."We will regard the global, anti-Israel BDS campaign as anti-Semitic," Pompeo said, referring to the Boycott, Divestment and Sanctions movement."We will immediately take steps to identify organizations that engage in hateful BDS conduct and withdraw US government support for such groups", he said, adding that all nations should "recognize the BDS movement for the cancer that it is."BDS organizers cast their movement as a non-violent way of protesting Israel's policies towards the Palestinians modeled on the campaign that helped end apartheid in South Africa. The movement has had some limited success over the years but no impact on the Israeli economy.Israel views BDS as