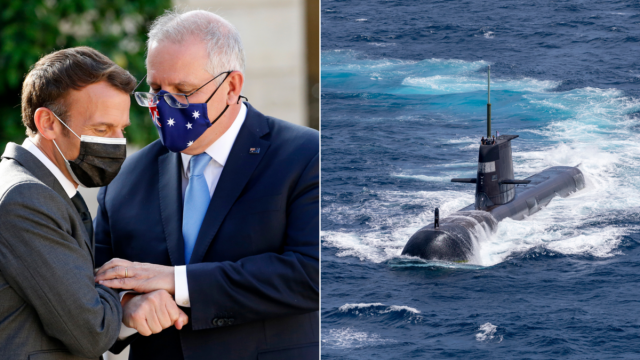 French President Emmanuel Macron has told Australian Prime Minister Scott Morrison he has broken the trust between their two countries and it is up to Canberra to repair relations, the Elysee Palace says.

In the call on Thursday, which came ahead of a UN climate change summit in Glasgow, Macron also urged Morrison to commit to halting coal mining and the use of coal for power production.

Relations between France and Australia soured when Canberra signed up to the AUKUS partnership which involved the US and the UK helping Australia create a fleet of nuclear-powered submarines.

The new partnership meant Australia scrapped a $A90 billion deal for France to supply diesel-electric submarines.

The call between the pair, who will both attend a G20 summit in Rome later this week, is the first time the two leaders have spoken since France was informed by letter that Canberra was scrapping the 2016 submarine deal.

Surgeons celebrate the approval of the new technology for the distortions with a government...

Consumer Confidential: The pandemic is ‘a cornucopia for scam artists.’ Here’s how to protect...

Ahead of Zambia Elections, Fears Rise of a Political Crisis

Biden’s political nightmare suddenly feels like 2005 all over again

Investors Diurnal Team - August 30, 2021 0
A monster hurricane is pounding New Orleans. Americans are mourning US combat deaths in a post 9/11 war. And a President is under siege....