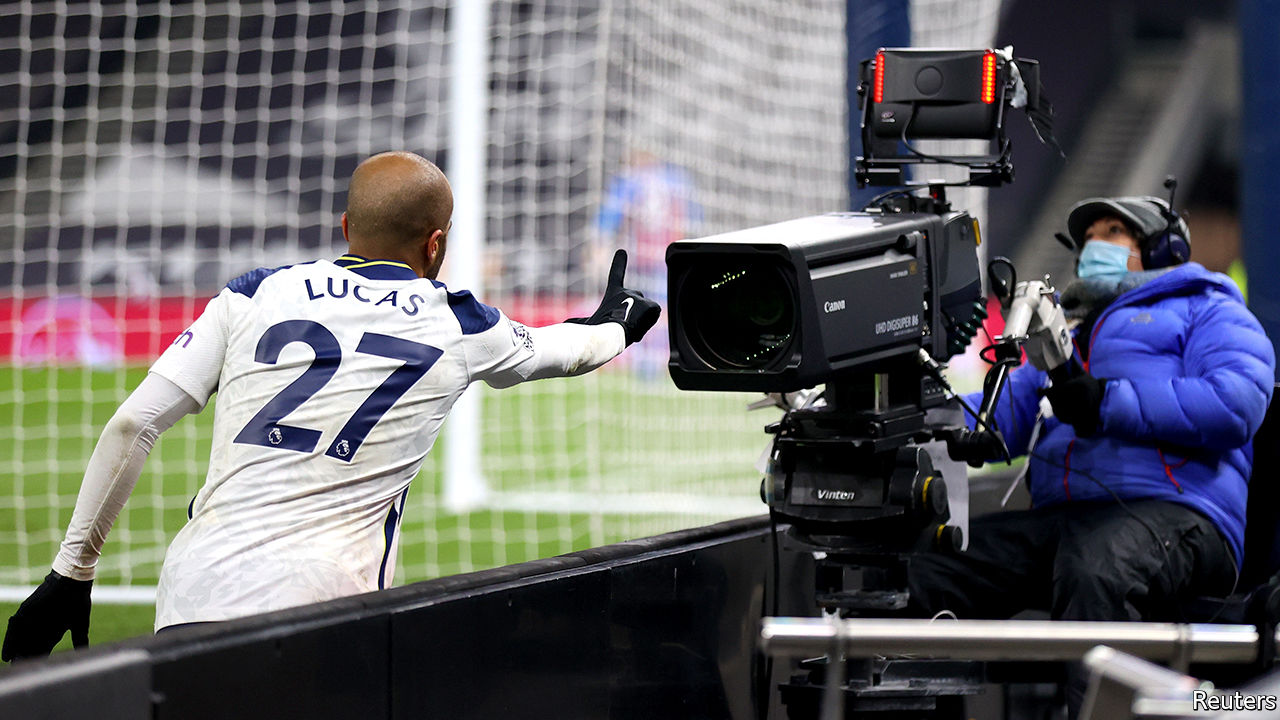 THE ENGLISH Premier League (EPL), the world’s wealthiest domestic football competition, has just survived a nasty scare. The short-lived European Super League (ESL), launched, vilified and aborted all within a few days in April, would have been disastrous for it, threatening the source of its remarkable ascent: a huge increase in the value of its broadcasting rights. If attention had switched to the midweek ESL, the league would have struggled to command such big fees for its matches; and the windfalls given to the six English teams that were among the 12 ESL founding members would have further weakened the EPL’s power over them. But the ESL’s collapse is not the end of the Premier League’s troubles.

Its domestic broadcasting contracts are up for renewal. This used to be a chance to extract even more money from its partners. Yet the broadcasting market has softened so much that the EPLhas for the past few years been in commercial retreat, and appears to be facing its stiffest test yet. So much so that this year it has asked the government for permission to abandon the auction process that has proved such a lucrative way of distributing broadcasting rights, in favour of rolling over its existing contracts on the same terms.

In 1992, when the EPL was launched, Sky Sports paid £640,000 ($1.1m) for the rights to each of its matches. By 2016 the cost had risen to about £10m. During that time the league’s soaring popularity and Sky’s determination to fight off a series of competitors, most recently BT, drove up the cost of broadcasting rights until they became the biggest source of income for England’s leading clubs. Flush with cash, the clubs were able to compete with European powerhouses for the world’s best players, making the league a stronger commercial proposition and pushing up the value of the rights even higher. UEFA, European football’s governing body, now considers English clubs to be the strongest in the region.

But the most recent auction, conducted in early 2018, was a dud. The amount paid by BT and Sky fell by 13% and if an auction were to take place this year—an option the Premier League is keen to avoid—analysts expect a similar fall. A truce between Sky and BT has depressed the price. Before the 2018 auction, the companies announced a content-sharing agreement that enabled subscribers to each service to receive matches bought by the other. Football fans no longer had to pay for both providers to watch every match. According to Jon Mackenzie, the head of content at Analytics FC, a football-data company, it was “the watershed moment”, when “the two companies realised it would be more profitable to collaborate”. Under less competitive pressure today than they were then, and still facing the threat of breakaway competitions, the two companies would probably adopt a similarly disciplined strategy this time.

If there is a threat to the Sky-BT duopoly that could have injected more competition into the market, it has long been expected to come from one of the streaming giants. However, this is unlikely to materialise imminently. Amazon is the one technology firm to have bought EPL rights, but its strategy with sports coverage has so far been opportunistic: it has bought small packages that it believes are undervalued. In late 2020 it bought the rights to broadcast in India matches played by the New Zealand cricket team between 2021 and 2026. This seems a strange strategy, but during this period India will tour New Zealand twice. This made the deal a much cheaper way for Amazon to broadcast matches featuring the hugely popular Indian team. Earlier this year the firm also committed $1bn a year to buying rights to NFL matches in the US. Although the sum is huge and it has signed up for a decade, it again opted for a package of less prestigious games and is paying less than the big pay-TV broadcasters.

A similar approach can be detected in its involvement with English football. At the 2018 auction it picked up a package of 60 of the less attractive EPL games for a reported £90m, a significantly lower cost-per-game than that paid by Sky or BT. The deal worked for Amazon, whose main purpose was to attract subscriptions to its Prime delivery service, and recorded a big bump in subscribers in the quarter when it broadcast its EPL matches. Yet rights for English football are very expensive compared with other sports events. And the EPL splits its domestic- and overseas-rights auctions, so, in the UK, Amazon’s audience would be limited to its Prime subscribers in the country. Going toe-to-toe with Sky and BT is just not that attractive a proposition.

The mood surrounding football-broadcast rights elsewhere in Europe is also cautious. In Germany, the domestic rights auction a year ago resulted in a 5% fall in value. In France, the league began a record rights deal with a new rights partner, Mediapro, a Chinese-Spanish company, in 2020. However, amid the pandemic Mediapro was unable to attract the subscribers it had anticipated and the deal soon collapsed. The rights were retendered and were bought by the previous broadcaster, Canal+, for a song. Clubs in Italy accepted a deal in March worth €2.5bn ($3bn) over three seasons from DAZN, a streaming platform with a burgeoning sports portfolio, rather than a smaller offer from Sky. The current rights deal, which is shared between the two companies, is worth more than €2.9bn. That DAZN has bought rights in Germany and Italy is further evidence that streaming firms see greater value outside England.

The subdued market is bad news for the EPL. The league is conscious that its clubs are facing a straitened future, having lost a year of match-day revenue since crowds were banned at the start of the pandemic. It needs to find higher revenue flows to placate its most restless members, like the ESL rebel six. The EPL’s chief executive, Richard Masters, has confirmed that it would like to launch its own streaming service, but that this is likely to focus on overseas subscribers. That it is exploring a private sale of its broadcasting rights is an admission of its weak bargaining position. An auction would be an invitation for Sky and BT to drive down the rights by a similar proportion to that seen elsewhere.

The clubs are also being squeezed. Liverpool, which is among the better-run EPL teams, lost £46m in the 2019-20 season, compared with a profit of £42m in the previous year, because of precipitous falls in broadcasting and match-day revenue. The pandemic has ravaged both match-day and broadcasting income two of the clubs’ three income streams (the third being “commercial”—sponsorship, naming rights and so on). Meanwhile the wage bills—mainly for players—keep rising. Liverpool’s has increased by more than 50% in the past three seasons, so that salaries now gobble up two-thirds of total revenue. The EPL average is even higher, at 75%. Without chunky increases in broadcasting income, clubs will have to review the terms they offer to their players. Yet the size of the wage bill is the best predictor of on-field success.

The broadcasters, too, have reasons to be concerned. Much of the increase in cost of the rights has been passed on to consumers. An analytics firm, Enders Analysis, has calculated that the cost of a Sky subscription has risen far faster than inflation, to the point where the company believes any further increases could result in lower overall revenue because of cancellations. The launch of a redesigned “super league”, denting the value of the broadcasters’ EPL rights, remains a possibility.

Given the uncertainty faced by all parties, the EPL’s hopes of selling its rights privately may be welcomed on all sides. The clubs would continue to receive more in revenue than do their counterparts in Europe, maintaining their clout in the transfer market. The EPL could argue it achieved a better outcome than the Bundesliga or Serie A. And the broadcasters would hold on to their prized asset at a lower cost in real terms. As Claire Enders, the eponymous boss of the analytics firm, points out, for all of the talk of disruption from other broadcasters, streaming platforms and breakaway competitions, football leagues in England, France, Germany and Spain are all using the same providers as they were in 1992. Some fraught relationships are more stable than they look.

Cryptocurrency price news – ISO 20022 to be implemented by all federal banks as...

Stellan Skarsgard: ‘It’s an artist’s duty to be offensive’

Dh80 million lost in crypto scams in the first half of...

The secret tactic fraudsters are using to attack your business