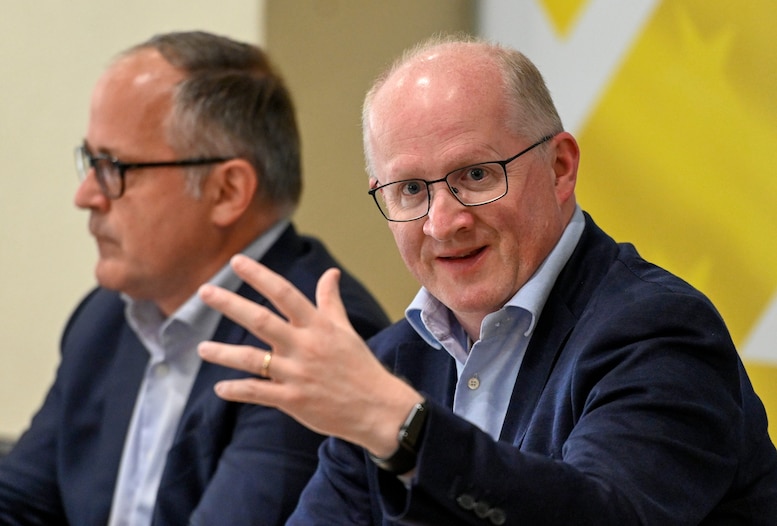 French economist Benoît Cœuré (L) and Irish economist Philip Lane (R), Members of the Executive Board of the ECB

European governments are racking up debt in order to shield their economies from the impact of the coronavirus pandemic, but low interest rates mean this burden is sustainable, in stark contrast to conditions a decade ago that triggered the region’s borrowing crisis, European Central Bank chief economist Philip Lane said on Monday.

Lane told Portuguese broadcaster RTP3 in an interview that while the pandemic was a large shock, it was temporary in nature and fiscal support – in the form of cheap borrowing conditions – was the correct response.

“Yes, there will be more public debt at the end of this, but in fact that is the correct response to this type of pandemic emergency,” Lane said, according to a transcript of the interview.

Coronavirus has killed well over a quarter of a million people across the whole of Europe and plunged the region into recession. In response, the ECB has kept interest rates at zero in order to keep credit flowing to businesses and households, while national governments are spending trillions in employment support schemes and other benefits to prevent total economic collapse.

Read More: JPMorgan shares 35 European stocks across 10 sectors that you need to own in the rotation to value — including one that could see EPS growth of almost 700% next year

Even though public debt across the euro zone will easily reach 100% of gross domestic product, the prospect of a repeat of the sovereign debt crisis of 2010-2012 is very remote, Lane said.

“Across Europe there will be significant increase in public debt, but when you look at the very low interest rates right now, the cost of making the payments on this debt in the years to come will be quite contained. If you look at the market, the market also thinks that this can be handled,” Lane said.

“There is no reason to believe that this has some kind of intrinsic dynamic that will lead us to a return of the conditions of ten years ago,” he added.

Yields on German 10-year bonds, widely regarded as the safest in the region, are around -0.55%, while those on nations perceived to be riskier, such as Italy or Greece, are trading at between 0.60 and 0.70%. At the height of the crisis in late 2011, the yield on Italian bonds was closer to 7.0% and that on Greek debt hit 38%.

“We heard from the ECB Chief Economist Philip Lane overnight as he reaffirmed that the ECB will provide enough monetary stimulus at its next meeting to make sure governments, companies and households have access to cheap credit throughout the coronavirus crisis. He added that, “Our orientation is to keep financing conditions favorable,” Deutsche Bank strategist Jim Reid said in a note.

The ECB’s €1.35 trillion bond-buying programme, together with a number of other policy tools also helps provide a safety net for sovereign issuers.

Read More: Barclays details its ultimate strategy for picking stay-at-home market winners for a post-COVID world — and shares 2 stocks all investors should own before the recovery accelerates

The New World Order: The conspiracy theory and the power of...

Investors Diurnal Team - April 23, 2021 0
NEW YORK, April 23, 2021 /PRNewswire/ -- Cut Red Tape 4 Heroes, a not-for-profit initiative that has put more than 4 million items of PPE directly in the hands of 270,000 healthcare workers and others in need since the start of the pandemic, has received a record donation of 1 million items of PPE, retail value of $1 million, from WellBefore, a Texas-based medical supplies e-commerce retailer.To mark Cut Red Tape 4 Heroes' one-year anniversary, Cut Red Tape 4 Heroes will give hospital workers a month's worth of PPE April 26, 2021, starting at 11:30 a.m. outside Manhattan's Bellevue Hospital. Workers will receive KN95s, surgical masks, cloth barrier masks, and hand sanitizer.Bellevue was the first hospital Cut Red Tape 4 Heroes volunteers brought free PPE to at the start of the pandemic's PPE shortages.Cut Red Tape 4 Heroes will distribute the WellBefore donation of KN95s, 3-ply surgical masks, and face shields in three methods: 1) events outside hospitals for hospital workers and community members; 2) PPE drive-throughs for often-neglected small/medium organizations; and 3) delivery/pick-up for public housing complexes, first responders, and others. "Shahzil Amin and WellBefore's gift of one million pieces is extraordinary and will support the health and wellbeing of countless New Yorkers," Cut Red Tape 4 Heroes founder Rhonda Roland Shearer said. "Our frontline workers still have to buy expensive PPE for their home and personal use. We're so pleased WellBefore has enabled us to keep saying thank you with free PPE to hospital workers who continue to put their lives and mental health on the line during the pandemic.""Giving back is a core pillar that was infused into WellBefore since its inception," said Shahzil (Shaz) Amin, WellBefore Founder/CEO. "We donate weekly to non-profits, individuals, and many other organizations in need. The impact that Rhonda has made throughout her life, especially now with Cut Red Tape 4 Heroes, is something we deeply admire and are humbled to support."Cut Red Tape 4 Heroes's Shearer took out a nearly $1 million loan to buy PPE for healthcare workers at the beginning of the pandemic. A GoFundMe campaign, www.cutredtape4heroes.org, has raised $500,000 to pay down her debt. For more information, contact info@asrlab.org. View original content to download multimedia:https://www.prnewswire.com/news-releases/cut-red-tape-4-heroes-receives-record-donation-from-wellbefore-of-1-million-items-of-ppe-retail-value-1-million-new-free-ppe-campaign-starts-with-bellevue-hospital-workers-april-26-301276150.html SOURCE Cut Red Tape 4 Heroes
Markets

Abercrombie & Fitch is cool again, after years as the most...