In 2013, Martize Tolbert walked out of prison and into a financial hole.

Mr. Tolbert was arrested on drug and weapon charges as a teenager, then bounced in and out of jail for more than a dozen years. When he was released for the last time, he owed some $12,000 in court fines and fees.

Four years later, he was working at a Charlottesville, Va., Jiffy Lube, making $9 an hour, barely enough for rent, food and supporting his son. The debt barred him from getting a driver’s license, but, with or without one, he had to drive. A Black man, he got pulled over often, he said, leading to more tickets, bigger for the lack of a license. The interest was compounding too. He tried to work out payment plans, but the total was only growing.

“It was all uphill just trying to get everything back in line from the mess I had created for myself,” said Mr. Tolbert, 40. “Everything was a struggle.”

Each year, more than 600,000 people deemed to have paid their debts to society are released from U.S. prisons, but the financial consequences can follow them long after. It can be hard for them to get checking accounts and nearly impossible to get loans. Some get out only to discover their identities were stolen. Many, like Mr. Tolbert, are deep in debt. 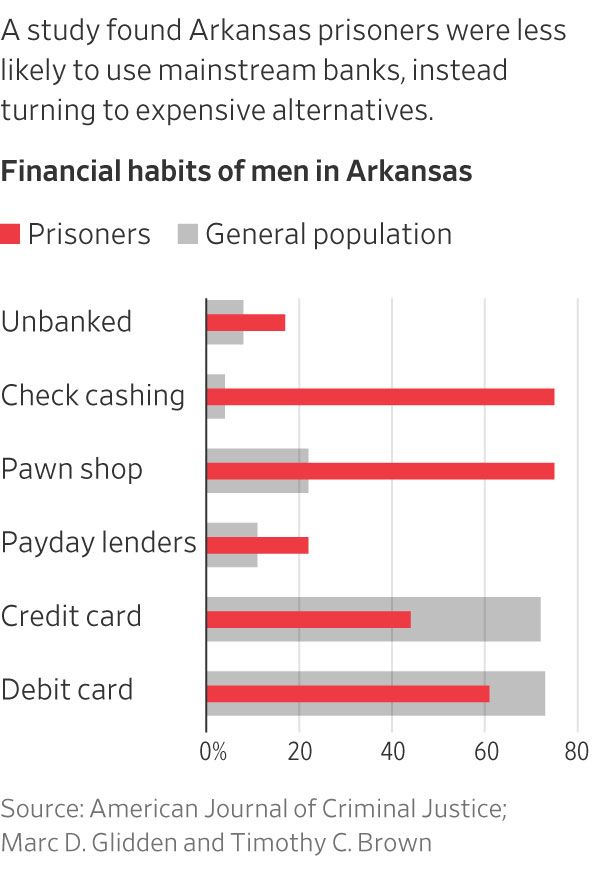 That all makes it hard for ex-inmates to get jobs, start businesses or find housing. In Florida and other states, court debts cost the right to vote. The problems trap all sorts of criminals, from small drug offenders to white-collar swindlers.

For Black men, who are nearly six times more likely than white men to be in prison, the financial aftermath is just another byproduct of a justice system already weighted against them. A 2019 report from the U.S. Commission on Civil Rights found people of color are disproportionately arrested for nonviolent crimes like loitering and disorderly conduct, and are generally sentenced more harshly, “which amplifies the impact of collateral consequences.”

Increasing evidence shows these repercussions push some people back into crime.

Programs to help former inmates have won widespread support. Big corporations including
JPMorgan Chase
& Co. have committed to hiring applicants with criminal records. But there has been little attention on how to get ex-prisoners into the mainstream financial system.

After a summer of national debate on systemic racism and criminal-justice reforms, the nation’s biggest banks have pledged billions of dollars of loans to and investments in minority communities. None have publicly mentioned getting former inmates banking products, but some are quietly discussing plans, advocates say.

The criminal-justice system creates a host of fines and fees for both the guilty and the merely accused. There are fees for obtaining a public defender, for getting an electronic monitoring device, for court administrative costs. Personal debts like medical bills and child support can also pile up for the incarcerated, who often have no real way to pay them.

Once they get out, just getting a bank account can be hard.

Many formerly incarcerated individuals don’t have government identification, the first step to getting an account. A system banks use for screening customers snags many others. Commonly referred to by the brand name ChexSystems, the system flags old overdrafts, bounced checks and accounts closed involuntarily, problems that are common among former inmates. 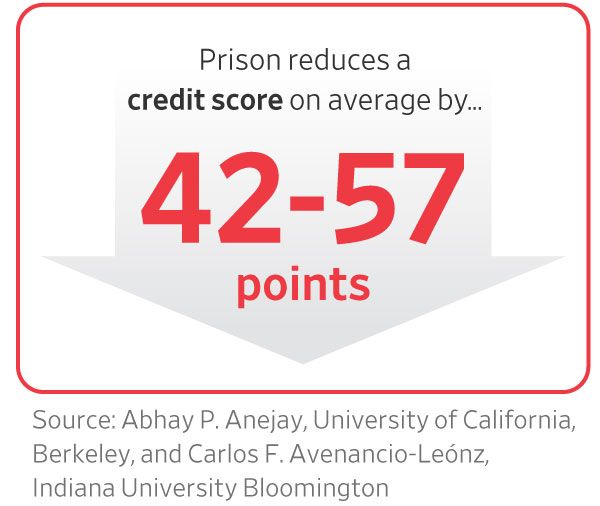 Most banks say they don’t outright reject applications for minor issues, but the flags can trigger more questions, including a background check. There is no banking standard on how to deal with criminal convictions, especially for nonfinancial crimes. Deciding who gets an account is largely left to branch managers. A 2017 study of men in Arkansas prisons found they were twice as likely to be unbanked as the state’s general male population.

In Pennsylvania, the state Department of Corrections found 73% of ex-inmates who had stayed out of prison for three years had an account with a bank or a credit union. A far smaller proportion, 39%, of those who went back to prison did. The department and the state’s banking regulator recently started working together to teach inmates about finances, believing it could help keep more out of prison.

Many of the formerly incarcerated have bad credit scores, a big hurdle in getting a loan, an apartment, even a job.

Criminal histories don’t show up on credit scores, but scores fall from lack of debt use and can disappear after seven years, which means many people leave prison with no score at all.

Convictions reduce a credit score by about 50 points on average, according to one study. With less access to credit, those former inmates were nearly 20 percentage points more likely to go back to jail, the study concluded.

Fixing these problems is thorny.

Take identity theft. Inmates are particularly vulnerable, with their names, birthdays and other personal information widely available. They can’t get mobile or email alerts about possible fraud. Often, a theft is by someone close to them, such as a family member sticking their name on a utility bill they don’t intend to pay.

While inmates can request a credit report by mail, the Credit Builders Alliance, a nonprofit network, says that could backfire by changing their last-known address to a prison.

The CBA, other financial groups and lenders have discussed an automatic credit freeze triggered by a prison sentence, but there is no agreement it would even work.

Aaron Smith was serving 12 years for his role in a Chicago heroin ring when someone received tax refunds in his name. Calling the Internal Revenue Service required hours of waiting on hold, a frustration prisoners aren’t normally allowed. Mr. Smith, 39, succeeded only because he was on good terms with counselors.

“That’s not really conducive to life in prison,” Mr. Smith said. He now hosts a podcast about entrepreneurs after prison—“Escaping the Odds”—and is advising a group working to start a credit union for the formerly incarcerated.

The lenders most willing to work with ex-convicts tend to be small and relatively unknown. Their reach is limited, both in terms of loans they can fund and their local presence. Many former inmates don’t even know they are an option. Yet their results show how access to credit can help redeem all parts of a person’s life.

In Colorado, Rocky Mountain MicroFinance Institute funds and trains low-income entrepreneurs. When it accepted Danny Ballesteros into its boot camp in the summer of 2019, it was a lifeline just as he feared he was losing his auto shop.

Mr. Ballesteros, 42, had been working by flashlight, unable to afford new lights, when the program gave him a $2,500 loan and training on managing employees and customer scheduling.

“Typically you can’t get advice from people who don’t run their own business,” said Mr. Ballesteros, who had served time for drugs and wrecked his credit. “But the guys who did own a business, their lives weren’t like mine.”

The group that helped Mr. Tolbert, the Virginia man, with his $12,000 in court debt works solely with former inmates.

Mr. Tolbert was arrested in 2000. He was 19 and, he said, it was the first time he had been in trouble. He served six years, then was twice sent back for probation violations.

When he got out the third time, he had no real plan for how to pay off his court debt. When his mother died a few years later, something in him changed.

A mentor sent him to the Fountain Fund in 2017. He was skeptical: The local nonprofit operated from a small office at the end of an alley. But he got a $3,200 loan and used it to pay off enough of his debt to get his driver’s license three months later.

The nonprofit eventually hired him to counsel current and former inmates on business plans. He has helped it raise $500,000 for more loans.

Mr. Tolbert is working to expand the Fountain Fund because it can’t handle the volume of people seeking loans. When he looked across the country for a model to follow, he came up empty.

Last winter, Mr. Tolbert approached Troy Robinson about getting the Fountain Fund onto Mr. Robinson’s local radio show in Charlottesville. Mr. Robinson, 46, wanted to check it out himself.

Mr. Robinson was 18, a freshly graduated high-school football star, when he was arrested with a small amount of drugs in 1992. After appeals, Mr. Robinson served 18 months.

Struggling to find well-paying jobs, he decided to work for himself. He opened a barber shop and launched a limo service. He and his wife, Maxicelia, bought a food cart. The businesses did well, but Mr. Robinson couldn’t find anyone to lend to him.

“The guy would say everything looks really good until he’d ask you if you have ever been in trouble,” Mr. Robinson said. “Then they start fidgeting with their papers, and you know you aren’t getting a loan.”

Now, Mr. Robinson is starting a Charlottesville chapter of World Central Kitchen, a disaster-relief organization, and franchising his food carts. His businesses, he thinks, will soon be able to survive beyond him.

—Elisa Cho contributed to this article.

Write to David Benoit at david.benoit@wsj.com

Berkshire Hathaway Is Becoming Its Own Elephant Investment