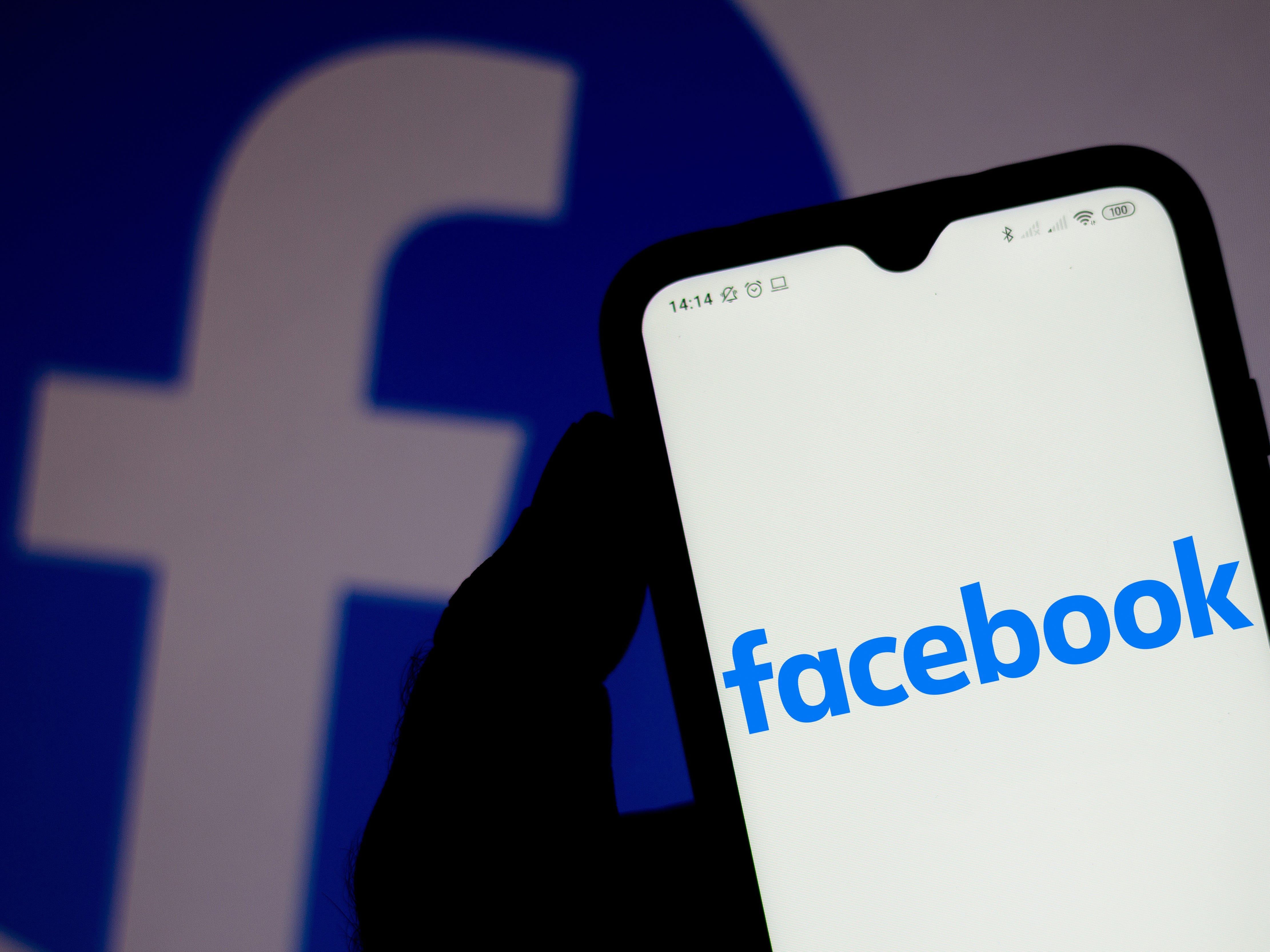 In this photo illustration a Facebook logo seen displayed on a smartphone.

The social media tech giant plans to mitigate conflict by “slowing the spread of viral content,” “tweaking the news feed to change what types of content users see,” and “lowering the threshold” for what the software flags as harmful, people familiar with the decisions told the WSJ.

“We’ve spent years building for safer, more secure elections,” a spokesperson for Facebook told Business Insider in a statement. “We’ve applied lessons from previous elections, hired experts, and built new teams with experience across different areas to prepare for various scenarios. We’ve created new products, partnerships and policies — such as pausing post-election ads — to ensure we’re more prepared than ever for the unique challenges of an election during a global pandemic.”

Facebook’s head of global affairs told The Financial Times last month the company had plans in preparation for unrest after the election but had not specified what measures would be intact. In September, Facebook CEO Mark Zuckerberg said “this election is not going to be business as usual” and will take steps to “reduce the chances of violence and unrest.”

Facebook announced early this month it will ban all political ads for an indefinite period after Election Day.

Election and security experts including the bipartisan Transition Integrity Project have warned the potential for violence is high in this coming election. State and city officials are preparing for potential unrest as concerns for security arise.

Meanwhile, armed extremist groups have signaled they would appear at polling sites on Election Day.

Critics have scrutinized Facebook for the way it responds to violent extremist groups, which often congregate on the social media platform. In August, Zuckerberg said the company was slow to take down a page that called for armed civilians to Kenosha, Wisconsin amid ongoing protests which Buzzfeed said was flagged to Facebook 455 times.

A Wall Street Journal analysis published this month said the company did not always enforce content policies regarding disinformation and hate speech it said it would implement.

Rather later than rivals, Apple unveils a first 5G-enabled phone

Investors Diurnal Team - August 28, 2020 0
Foresight Autonomous Holdings Ltd. (Nasdaq and TASE: FRSX), an innovator in automotive vision systems, announced today that its wholly owned subsidiary, Eye-Net Mobile Ltd., will start a pilot project with a multi-billion-dollar multinational Japanese electronics company to test its Eye-Net™ Protect cellular-based V2X (vehicle-to-everything) accident prevention solution. This is the second pilot project the Company announced this month, following the announcement about a pilot project with a multi-billion-dollar global Japanese technology company to test Eye-Net Mobile's solution. The pilot project will be used to validate and evaluate the software development kit (SDK) configuration of the Eye-Net solution and its technical specifications. Upon successful evaluation, the Japanese electronics company, which implements hundreds of thousands of units of advanced dashboard cameras (dashcams) every year, may proceed to integrate the Eye-Net solution into its dashcams. According to recent reports by Grand View Research, the global dashboard camera market size is expected to reach around $7.5 billion by 2027. An estimated 36.1 million dashcams were sold in 2019, more than 10 million of which were advanced dashcams. Advanced dashboard cameras come with parking motion detection, GPS support, and Wi-Fi connectivity. These features, coupled with government regulations and increasing awareness regarding vehicle safety, are expected to drive demand for advanced dashcams in the coming years. "This second pilot project is a vote of confidence from another Japanese company, that reinforces our market penetration strategy, targeting the smart devices and services market, including dashcams, head-up displays, wearable devices, navigation aids, and IoT platforms,” said Dror Elbaz, COO & Deputy CEO of Eye-Net Mobile. "We decided to focus on the Japanese market, which is often characterized by early adopters of new technologies and innovations, enabling quick market penetration. Concentrating on one geographic region will help us to achieve a critical mass of Eye-Net Protect users in a defined area, thus increasing the chance of preventing accidents and saving lives.” The Eye-Net Protect V2X solution is designed to protect the most vulnerable road users in real time—including pedestrians, cyclists, scooter drivers and car drivers—by providing collision alerts when the road users have no direct line of sight. An SDK configuration allows Eye-Net Mobile to integrate its solution with leading location-based products such as wearable devices, dashboard cameras, navigation aids, infotainment systems, third-party applications and other smart devices. For more information about Eye-Net Mobile, please visit www.eyenet-mobile.com, or follow the Company’s LinkedIn page, Eye-Net Mobile; Twitter, @EyeNetMobile1; and Instagram channel, Eyenetmobile1, the contents of which are not incorporated into this press release. About Foresight Foresight Autonomous Holdings Ltd. (Nasdaq and TASE: FRSX), founded in 2015, is a technology company engaged in the design, development and commercialization of sensors systems for the automotive industry. Through the company’s wholly owned subsidiaries, Foresight Automotive Ltd. and Eye-Net Mobile Ltd., Foresight develops both "in-line-of-sight” vision systems and "beyond-line-of-sight” cellular-based applications. Foresight’s vision sensor is a four-camera system based on 3D video analysis, advanced algorithms for image processing, and sensor fusion. Eye-Net Mobile’s cellular-based application is a V2X (vehicle-to-everything) accident prevention solution based on real-time spatial analysis of clients’ movement. The company’s systems are designed to improve driving safety by enabling highly accurate and reliable threat detection while ensuring the lowest rates of false alerts. Foresight is targeting the Advanced Driver Assistance Systems (ADAS), the semi-autonomous and autonomous vehicle markets and predicts that its systems will revolutionize automotive safety by providing an automotive-grade, cost-effective platform and advanced technology. For more information about Foresight and its wholly owned subsidiary, Foresight Automotive, visit www.foresightauto.com, follow @ForesightAuto1 on Twitter, or join Foresight Automotive on LinkedIn. Forward-Looking Statements This press release contains forward-looking statements within the meaning of the "safe harbor" provisions of the Private Securities Litigation Reform Act of 1995 and other Federal securities laws. Words such as "expects," "anticipates," "intends," "plans," "believes," "seeks," "estimates" and similar expressions or variations of such words are intended to identify forward-looking statements. For example, Foresight is using forward-looking statements in this press release when it discusses the pilot project with the Japanese electronics company, that upon successful evaluation, the Japanese electronics company may proceed to integrate the Eye-Net solution into its dashboard cameras, the size of the dashboard camera market, the potential of the company’s products, and the company’s market penetration strategy. Because such statements deal with future events and are based on Foresight’s current expectations, they are subject to various risks and uncertainties, and actual results, performance or achievements of Foresight could differ materially from those described in or implied by the statements in this press release. The forward-looking statements contained or implied in this press release are subject to other risks and uncertainties, including those discussed under the heading "Risk Factors" in Foresight's annual report on Form 20-F filed with the Securities and Exchange Commission ("SEC") on March 31, 2020, and in any subsequent filings with the SEC. Except as otherwise required by law, Foresight undertakes no obligation to publicly release any revisions to these forward-looking statements to reflect events or circumstances after the date hereof or to reflect the occurrence of unanticipated events. References and links to websites have been provided as a convenience, and the information contained on such websites is not incorporated by reference into this press release. Foresight is not responsible for the contents of third party websites. View source version on businesswire.com: https://www.businesswire.com/news/home/20200828005121/en/
Markets

Investors Diurnal Team - October 22, 2020 0
(RTTNews) - The Taiwan stock market has moved higher in two of three trading days since the end of the four-day losing streak in which it had lost more than 200 points or 1.7 percent. The Taiwan Stock Exchange now rests just above the 12,875-point plateau although it figures to head south again on Thursday. The global forecast for the Asian markets is soft on concerns over a new wave of the coronavirus and doubts about a new stimulus package to deal with it. The European and U.S. markets were down and the Asian markets are expected to open in similar fashion. The TSE finished slightly higher on Wednesday following mixed performances from the technology stocks and cement companies, while the financials were soft. For the day, the index was up 14.88 points or 0.12 percent to finish at 12,877.25 after trading between 12,846.42 and 12,942.12. Among the actives, Cathay Financial dipped 0.13 percent, while Mega Financial eased 0.18 percent, First Financial fell 0.25 percent, E Sun Financial retreated 0.81 percent, Taiwan Semiconductor Manufacturing Company added 0.44 percent, United Microelectronics Corporation gained 0.48 percent, Hon Hai Precision skidded 1.23 percent, Largan Precision jumped 1.78 percent, Catcher Technology tumbled 1.67 percent, MediaTek dropped 0.86 percent, Formosa Plastic sank 0.63 percent, Asia Cement rose 0.49 percent, Taiwan Cement slid 0.12 percent and CTBC Financial and Fubon Financial were unchanged. The lead from Wall Street is negative as stocks showed a lack of direction on Wednesday, bouncing back and forth across the unchanged line before finally finishing in the red. The Dow shed 97.97 points or 0.35 percent to finish at 28,210.82, while the NASDAQ lost 31.80 points or 0.28 percent to end at 11,484.69 and the S&P 500 slid 7.56 points or 0.22 percent to close at 3,435.56. The choppy trading on Wall Street came as traders kept an eye on the latest developments in Washington, as lawmakers try to reach an agreement on a new stimulus bill. However, Senate Majority Leader Mitch McConnell revealed on Tuesday that he has warned the White House not to make a deal before the elections. Federal Reserve Governor Lael Brainard urged Congress to pass a new relief bill in a speech at an online conference hosted by the Society of Professional Economists. Crude oil prices tumbled Wednesday, weighed by concerns over a drop in energy demand following a smaller than expected drop in oil stockpiles and an increase in gasoline inventories. West Texas Intermediate Crude oil futures for December were down $1.67 or 4 percent at $40.03 a barrel. Closer to home, Taiwan will see September figures for unemployment later today; in August, the jobless rate was 3.83 percent.
Markets

Investors Diurnal Team - October 22, 2020 0
(RTTNews) - German stocks declined on Thursday as new coronavirus cases continued to surge and a survey showed German consumer confidence is set to weaken in November. Germany has recorded more than 11,200 new Covid-19 cases over the past 24 hours, the first time since the start of the pandemic that more than 10,000 Covid-19 cases were recorded in the country in a single day. Market research group Gfk said its forward-looking consumer sentiment index fell more-than-expected to -3.1 from -1.7 in October. All three sub components, namely economic and income expectations and the propensity to buy declined in October. After five rises in a row, the economic sentiment decreased seventeen points to 7.1 points in October. Concerns surrounding delays to U.S. economic stimulus and the possibility of American election interference also weighed on markets. The FBI said that Iran and Russia had obtained voter registration information and had taken actions to disrupt the election process. U.S. director of national intelligence John Ratcliffe said that Tehran was already using the information to send threatening emails. The benchmark DAX dropped 89 points, or 0.7 percent, to 12,468 after tumbling 1.4 percent in the previous session. Traton shares fell about 1 percent. The subsidiary of the Volkswagen Group said that the Covid-19 pandemic is still having significant impact on its business. Varta, a battery technology company, plunged 7 percent after extending the contract of its chief executive, Herbert Schein, until 2026.