The Justice Department’s lawsuit against
Visa
isn’t just relevant reading for Visa investors, but for investors across the payments sector.

At the heart of the suit is the future of payments in the U.S. Among the government’s allegations is that Visa saw a potential pay-by-bank offering from Plaid as a competitive threat to debit cards, so it moved to eliminate this risk by acquiring the company. Visa in response said that its business “faces intense competition from a variety of players” but that “Plaid is not one of them,” and the lawsuit is “legally flawed and contradicted by the facts.” 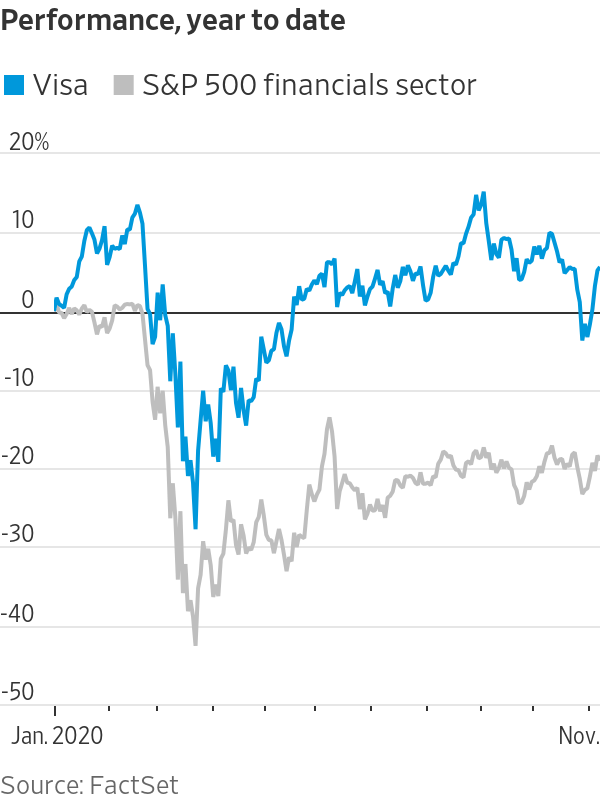 Whatever the outcome, for investors the suit could focus attention on how payments might evolve, in particular the potential of pay-by-bank arrangements. Also sometimes called account-to-account payments, pay-by-bank involves transferring money online directly between bank accounts and doesn’t involve a card network like Visa or
Mastercard.
Today such transfers may be familiar to consumers in some realms, such as paying bills online with checking accounts. But they aren’t yet typically an online shopping payment option for consumers, at least not directly.

The realm of digital bank-to-bank, non-card transfers is evolving rapidly. Banks in 2017 launched a real-time payment network via The Clearing House to speed up and fully digitize bank-to-bank transfers. For consumers, this can be used for things like Zelle person-to-person transfers and online bill payments, but it isn’t yet being rolled out as a way to pay merchants directly when shopping online. Mastercard acquired a technology firm called Vocalink that provides infrastructure for real-time payment networks.

Banks might not necessarily have a big incentive to move payments away from debit cards, as they issue the cards and collect fees when they are used. Still, they evidently see benefits in using their own rails for at least some portion of digital payments.

Separately, the Federal Reserve is in the process of launching its own real-time payment network. The network is years away from launching, and exactly whether or how it might be used for consumer-to-merchant payments isn’t clear yet. But certainly that has been the hope of some retailers that aim to save on fees paid to accept card payments.

Already there are digital wallets, which sometimes function as ways to use cards. The Justice Department referred to
PayPal
and Visa’s partnership, in which PayPal agreed to give equal priority to cards and bank transfers to fund its digital wallets. Still, as consumers use wallets like Venmo or Square’s Cash App increasingly to collect and manage cash and then use that cash to pay at merchants, they represent a non-card way to pay, too.

Whether debit versus pay-by-bank is a sound framework for an antitrust case will be debated in court. The U.K. approved the merger with Visa, in part citing competition among firms similar to Plaid. Visa argues that its deal with Plaid, which it says is a data network and not a payments company, brings “more choice for consumers.” In any event, investors should keep an open mind to a possible payments future beyond cards.

Write to Telis Demos at telis.demos@wsj.com

Brazil's Jair Bolsonaro says he will not take coronavirus vaccine

Covid-19 and the business of crowds

Why Business Travel Will Return

Investors Diurnal Team - November 17, 2020 0
Experian says its pre-tax profit slid to £345.46 million in the fiscal first half. The consumer credit reporting company posts £1.88 billion of revenue in H1. Experian's benchmark EBIT declines to £505.36 million in the first six months. In a report on Tuesday, Experian plc (LON: EXPN) said that its pre-tax profit in the fiscal first half came in lower on a year over year basis. The company, however, posted growth in its organic revenue.   Shares of the company jumped more than 1.5% in premarket trading on Tuesday but roughly 6% in the later hours. Experian is now trading at £28.73 per share after recovering from a year to date low of £18.82 per share in late March, when the impact of COVID-19 was at its peak. If you’re thinking of investing, you’ll need a broker: here’s a list of the top few to make selection easier for you Are you looking for fast-news, hot-tips and market analysis? Sign-up for the Invezz newsletter, today. Experian reports £488.77 million of EBIT Experian reported £345.46 million of pre-tax profit in the first six months of fiscal 2021, versus £362.05 million in the comparable period of last year. Last week,