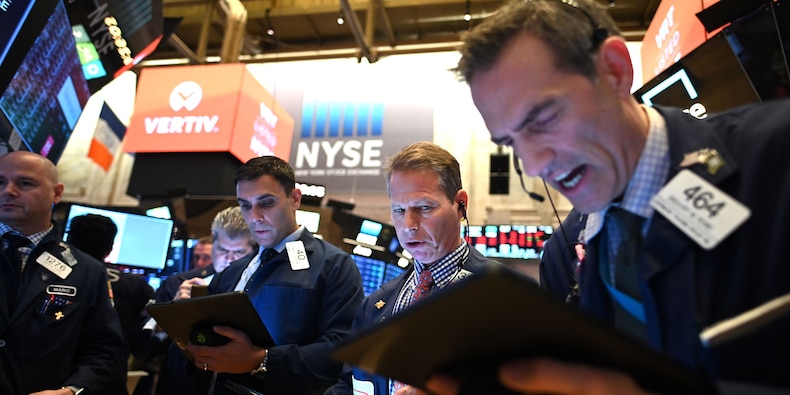 Global stocks rose on Monday at the start of the busiest week for fourth-quarter earnings season, with highly-anticipated results from tech stalwarts like Microsoft, Apple, Facebook, Tesla, and Amazon.

Since these mega-cap stocks carry a massive weighting in the major US indices, their quarterly results and outlooks are likely to drive the direction of the broader market.

President Joe Biden’s administration is making attempts to garner bipartisan support for the proposed $1.9 trillion stimulus plan. The package has been “naively priced by markets as sailing through the Senate unimpeded,” according to Jeffrey Halley, a senior market analyst at OANDA.

The proposal requires 10 Republican votes to clear the Senate. “Noises from Washington DC suggest that President Biden’s honeymoon won’t extend to Senate Republican’s handing over ten votes to ease the package though on a 60-40 majority,” Halley said. “The 60-vote majority can be slimmed to a 51-vote majority through reconciliation, breaking down the bill’s constituent parts, flushing them through a committee and passing that bit with a simple majority.”

Europe is faced with increasing concerns over coronavirus mutations from various parts of the world. Prime Minister Boris Johnson said there is some evidence that the UK’s virus variant may be more deadly. Data suggests it could have a 30% higher mortality rate among some age groups.

Read More: BANK OF AMERICA: Buy these 31 unheralded stocks as the recovery’s hottest trades of recent months continue to gain strength in 2021

Virus worries left European markets subdued on Monday. The UK’s FTSE 100, the Euro Stoxx 50, and Germany’s DAX were about flat during early trading.

“Learning from past mistakes, ministers have refused to make promises about when the UK will come out of its current lockdown, including refusing to commit to schools opening post-Easter,” said Connor Campbell, a financial analyst at SpreadEx.

Asian sentiment was boosted by a UN report stating China surpassed the US to become the largest recipient of foreign direct investment in 2020, with $163 billion inflows last year compared to $134 billion received by the US.

“The FDI story has definitely lifted China and its near neighbours today, blowing an economic recovery tailwind into geographically adjacent markets,” Halley said.

Read More: 3 investing heavyweights who oversee a combined $922 billion explain how the Democratic sweep and Capitol siege could shape the outlook for mega-cap tech stocks – and break down how to capitalize on the turn of events

'North Korea's acting envoy to Kuwait has defected to South'

Investors Diurnal Team - January 11, 2021 0
Jason Goldberger Dollar Shave ClubMichael Dubin, who founded Dollar Shave Club in 2011, is leaving the direct-to-consumer brand as its top executive. Jason Goldberger, the CEO of kitchen retailer Sur La Table, is set to take the reigns at the Unilever-owned brand starting Jan. 19, the company told Business Insider.  Dollar Shave Club has been touted as one of the biggest direct-to-consumer success stories in personal care, challenging established players like Procter & Gamble's Gillette alongside Harry's and similar brands. Visit Business Insider's homepage for more stories. Dollar Shave Club CEO Michael Dubin will step down later this month after roughly a decade after he founded it, the company confirmed to Business Insider. Dubin is set to leave the direct-to-consumer razor and personal care brand on January 19. His replacement will be Jason Goldberger, who currently serves as the CEO of Sur La Table. Read more: Razor maker Harry's CEO explains why it's on the acquisition hunt and getting into cat food after its hopes of being acquired by Schick's parent company fell through Goldberger has led Sur La Table through a bankruptcy spurred by the pandemic in recent months. The kitchen retailer reached a deal to emerge from bankruptcy in August, though with a smaller store footprint thanks to a drop-off in foot traffic at its physical stores. Dubin will stay on as a special advisor and member of the Unilever-owned brand's board, according to a statement. He had previously told the board about his interest in moving on from Dollar Shave Club, but only after the company had found a replacement, Sunny Jain, president of Unilever Beauty and Personal Care, said. "Jason is a proven leader and experienced CEO who has demonstrated a strong track record leading brands and driving growth and the business is on an exciting upward trajectory," Jain said in the statement. "I couldn't be more confident in the future of Dollar Shave Club than I am right now." "Leading DSC has been the ride of a lifetime," Dubin said. "I'm filled with gratitude for the myriad of people who have helped make this such a special place and brand, and I'm excited to stay involved." The CEO switch comes 10 years after Dubin founded Dollar Shave Club. Under his leadership, the company started marketing razors at a fraction of the price charged by established players such as Procter & Gamble's Gillette and Edgwell's Schick. Dubin himself appeared in early ads for the company, making an appeal for its cheaper razors. His efforts led to Dollar Shave Club's sale to Unilever, announced in 2016. Several other razor startups, from Harry's to Billie, which makes razors for women, have also tapped into the market, though neither has successfully completed a deal with a larger player.
Markets

Investors Diurnal Team - January 17, 2021 0
TAIPEI, Taiwan, Jan. 17, 2021 /PRNewswire/ -- Avalanche Computing, a hyper-scale computing technique provider based in Taipei and the Bay Area, has developed a one-click-through AI framework that allows for production speed and is highly scalable. Avalanche Computing's AI framework effectively trains your AI model in parallel or distributed mode on multiple GPUs without changing the algorithm for reducing AI project costs, and then does AI model deployment from one to many edge devices in one command. Avalanche Computing focuses on optimizing the deep learning environment and training in parallel, lightening the trained model, and then deploying the AI model at a hyper-scale. The proposed AI framework helps increase the speed of manufacturing and medical applications, including predictive maintenance, anomaly detection, machine diagnosis, defect detection, supply chain analysis, operation optimization, EGG signal, breath sound, medical signal, medical speech to text, anomaly detection, lung cancer detection, and more. Turnkey Solution for AI Development and Deployment "Our mission is to help our customers who focus on intelligence services and applications save time, staff numbers, and money during AI development. With our deep tech and computing domain knowledge, we aim to provide an excellent workflow for AI development and deployment in one platform at scale. Besides, our many alliance partners, academic collaborations, and computing hardware partners have further helped our AI customers succeed in global business," said Avalanche Founder and CEO Jay Chen. "With our AI experience with global enterprises, we can help customers achieve high-speed AI training, reduce waiting time, and quickly scale the inference system without building a new engineer team." Developing AI to Suit Different Needs across Different Industries Chen said his company currently serves more than 15 enterprise-level manufacturing and medical AI companies and SMEs. Avalanche's focus markets include the USA, Japan, Taiwan, and a several European countries, with target sectors including smart manufacturing, Industry 4.0, smart medical, and more. He related that his company has worked globally with NVidia SA, cloud service providers, and many software partners as well as with two accelerators, including NTUTEC and NTPC-AWS Joint Innovation Center. Avalance began tactical planning for expanding into the Japan and US markets in 2019. This year (2020), the company joined the NTU Corporate Accelerator Program (with AUO), TSS Lineup, and NVidia Inception Program; won AIdea first prizes in many categories; and was selected as an Airbus DDMS International Startups top-10 finalist. Avalanche Computing was selected by Taiwan Tech Arena (TTA) as one of the 100 featured Taiwanese startups showcased at CES 2021. A Significant Team with High Potential Avalanche Computing Taiwan was founded by MOST LEAP members, NVidia alumni, professors, and serial entrepreneurs who embrace the company's mission to help businesses without sufficient AI expertise to implement AI and transform the world together. Avalance Computing Co-Founder Jay Chen earned his Ph.D. in Computer Science at National Taiwan University. His research interests include big data analytics, cloud computing, and mobile data analysis. He was involved in deep learning and AI framework performance optimization at Nvidia. He has over 15 years of experience in big data analysis. He is a Phi Tau Phi Scholastic Honor Society member (Award in 2006 and 2016) and co-founder of the NTU Design Thinking Club. At Avalanche Computing, Jay provides technical support for smart manufacturing, smart medical, and more. Avalanche Computing Co-Founder, C.W. Huang earned his master's degree at National Taiwan University as well. His research thesis focused on machine learning, computer vision, and data mining. He has competed in numerous machine learning competitions and earned many recognitions, including a silver medal in the 4037-participant "Quora Insincere Question Classification" challenge hosted by Kaggle and a bronze medal in the "APTOS 2019 Blindness Detection" competition. At Avalanche, he developed a real-time breathing sound detection AI system in partnership with a smart medical technology corporation. CES 2021 TTA-VR Pavilion: https://pse.is/39wsem View original content to download multimedia:https://www.prnewswire.com/news-releases/ces-2021-avalanche-computing-develops-hyper-scale-computing-technique-for-speed-and-high-scalability-ai-projects-301209720.html SOURCE Avalanche Computing
Markets

Investors Diurnal Team - January 23, 2021 0
SpaceX founder and chief engineer Elon Musk speaks at a post-launch news conference to discuss the SpaceX Crew Dragon astronaut capsule in-flight abort test at the Kennedy Space Center. ReutersElon Musk, who recently relocated to Texas, now reportedly has plans to to drill for natural gas there, too.  SpaceX, Musk's space company, is looking to drill wells close to the company's Boca Chica, Texas, launchpad, according to Bloomberg. The site in Boca Chica previously hosted prototype launches for the company.  The billionaire's plan was revealed during a recent hearing before the Railroad Commission of Texas, the state's energy regulator, Bloomberg reported. Read more: Tesla has accused an engineer of downloading about 26,000 sensitive files in his first week Production plans are on hold due to a legal dispute between the SpaceX subsidiary Lone Star Mineral Development and Dallas Petroleum Group, which claims ownership of some inactive wells sitting on the same land. Dallas Petroleum Group claims it has ownership of both the wells, as well as surrounding acres, according to Bloomberg.  Although it's unclear what exactly the gas would be used for, Tim George, an attorney representing Lone Star, said at the hearing that SpaceX plans to use the methane it extracts from the ground "in connection with their rocket facility operations," Bloomberg reported.  Insider previously reported that SpaceX CEO Elon Musk had moved from California to Texas, a common path for tech CEOs looking to save on state income taxes. He has also said he would relocate Tesla to Nevada and the Lone Star State.  In December, Musk, said the reason behind his move to Texas was so that he could focus on SpaceX's Starship vehicle and Tesla's new Gigafactory. Musk tweeted on Thursday that he will give $100 million to whoever creates the best carbon-capture technology. Carbon capture could play a major role in President Joe Biden's plans to address climate change, and Musk's comments have suggested that he wants to produce synthetic carbon-neutral rocket fuel to power SpaceX rockets. —Elon Musk (@elonmusk) January 21, 2021 Read more: Elon Musk says he will give $100 million to whoever creates the best carbon-capture technology The surrounding SpaceX land has had little oil and gas development, and nearby there are almost a dozen wells classified as either abandoned or dry holes, Railroad Commission Records show.