While both
Home Depot
and
Lowe’s
were clear retail winners this year, the latter has arguably benefited more thanks to a less urban footprint and a higher proportion of do-it-yourself customers. That may be a winning formula today, but Home Depot is the one that seems poised for more upside post-pandemic.

That isn’t to dismiss the gains that both retailers have seen. Neither experienced much of a slowdown in sales growth last quarter, as consumers continued spending more time and money on their homes.

Home Depot’s revenue rose 23% from a year earlier in its third quarter, basically the same growth it enjoyed the prior quarter. Lowe’s saw sales increase 28% in its latest quarter, after growing 30% in the previous period. Both results were above analyst expectations. Outdoor and garden categories proved popular; Home Depot noted that its 12-foot skeletons sold out before October. 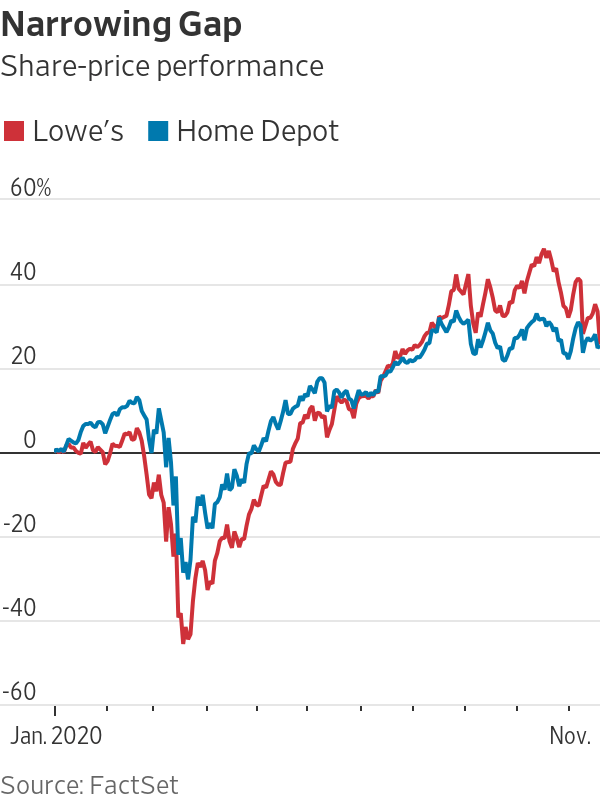 Sales to DIY customers have been growing faster for Home Depot and Lowe’s compared with professionals such as general contractors and renovators, providing a larger sales uplift to Lowe’s, which focuses more on that kind of customer. Lowe’s also has less exposure to urban markets, where people were initially more skittish about stepping foot inside stores due to the coronavirus pandemic.

That has been reflected in the share price movement: Lowe’s was trouncing Home Depot by as much as 16.7 percentage points earlier this year, but the gap has narrowed considerably. Today, their share-price performance looks pretty much the same year-to-date.

Positive vaccine developments allow for a possibility that people will spend less time at home sooner than expected, and Home Depot is the one that would benefit more from that scenario. Urban stores are set to rebound—already, sales growth in big-city stores are starting to outpace rural ones, as Lowe’s noted during its Wednesday earnings call.

Plus, there is likely pent-up demand for professional customers, who have been seeing muted demand for jobs because people remain cautious about allowing strangers into their homes. Both Lowe’s and Home Depot are making investments in that market, but Home Depot is clearly ahead, especially now that it is buying back facilities management company
HD Supply.
While HD Supply has been surprisingly resilient this year, it has seen weakness from hospitality customers; a gradual return to normal should bring back some of that business.

A retooling seems to be in order.

Investors Diurnal Team - October 30, 2020 0
The Centers for Disease Control and Prevention on Friday lifted its “no sail” order on U.S. cruise ships and set out a framework for how cruising could restart.Under the new structure, cruise companies must demonstrate adherence to stringent health and safety protocols including extensive testing, quarantine measures and social distancing. If they meet these C.D.C. standards, first on a series of crew-only test sailings, they will eventually be allowed to resume passenger excursions.The “no sail” order was originally issued on March 14 for all American cruises after it emerged that cruise ships played a major role in the initial outbreak of the coronavirus. The ships were remarkably efficient at spreading the virus: On board the Diamond Princess cruise ship in Japan in February, each case of Covid-19 was transmitted to approximately 15 other people. In Wuhan, China — the original epicenter of the virus — one person transmitted the disease to about four other people, a recent study published in the Journal of Travel Medicine found.In September, the C.D.C. recommended an extension to the policy until February amid reports of outbreaks on ships in other countries, but that advice was overruled by a White House coronavirus task force.The restrictions on
Economy