After falling for a record six quarters, economic growth surged on rising exports even as consumption remained weak.

Hong Kong’s economy posted its fastest growth in more than a decade in the first quarter, though the recovery is an uneven one led mainly by exports and held back by weak consumer spending and a slow vaccine rollout.

After declining for a record six quarters, gross domestic product surged 7.8% from a year earlier, advance data showed Monday, beating all estimates in a Bloomberg survey of economists. The figures were partly distorted by the low base a year ago when the economy was in lockdown, but the quarter-on-quarter expansion, a better reflection of growth momentum, also outperformed. 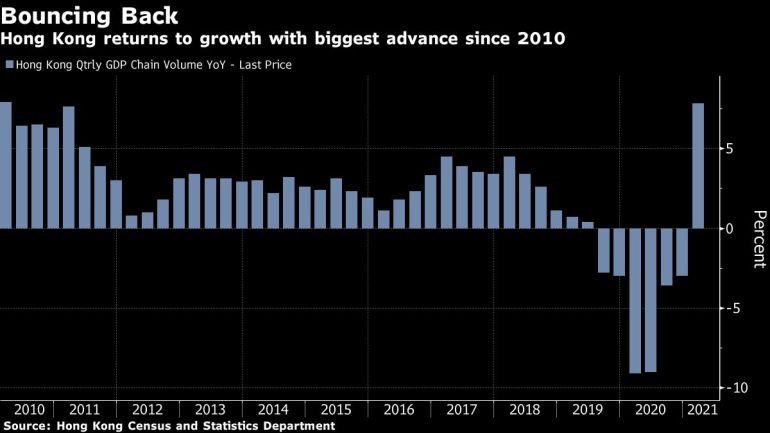 The latest data show an export sector that’s booming but consumption that remains subdued. The city’s hotels and retail shops are reliant on tourism spending, especially from visitors from the mainland, and border closures have hurt those sectors….

The U.S. Needs Street Smarts to Deal With Iran

Beyond Meat opens its first factory in China

Investors Diurnal Team - April 29, 2021 0
A day after his first address to Congress, President Biden met with former President Jimmy Carter and held a drive-in rally for his 100th day in office.President Biden visited former President Jimmy Carter, an old friend, as he traveled to Georgia on Thursday to pitch his $4 trillion economic agenda.A day after using his first address to Congress to urge swift passage of his plans to spend heavily on infrastructure, child care, paid leave and other efforts meant to bolster economic competitiveness, Mr. Biden held a drive-in car rally in Duluth, Ga., for his 100th day in office.The president promoted the $1.9 trillion economic aid bill he signed into law in March and pitched the two-part plan for longer-term investments in the economy that he has rolled out over the past two weeks. His audience included people in about 315 cars. His remarks were briefly interrupted by protesters calling on him to abolish Immigration and Customs Enforcement.Mr. Biden thanked Georgia voters for electing Senators Jon Ossoff and Raphael Warnock, who tipped the balance of the chamber to Democrats in January and enabled him to pass a far more ambitious economic rescue package after taking office than what would most likely
Economy

How the growing identity economy is reshaping the future of work

Investors Diurnal Team - May 13, 2021 0
It was almost a decade ago now that I noticed a shift in what my psychotherapy patients, particularly those working in corporate jobs, wanted...
Economy