General Motors
may finally have a shot at reinventing itself.

On Thursday, GM made its strongest pitch yet that it is a technology company that can win a coming electric-vehicle race against Tesla. “We are pivoting to a growth strategy,” said Chief Executive Mary Barra at an investor event organized by
Barclays.
She committed an extra $7 billion of capital spending to electric vehicles over the coming five years, while vaunting the skills the company can transfer across from the traditional car business.

As Tesla’s share price has soared this year, GM has made its case ever more loudly. Recently, the message has started to sink in: GM is now trading at its highest level since June 2018, when it spiked on news that Japanese tech investor SoftBank would take a stake in Cruise Automation, GM’s “robotaxi” operation. Back then, driverless cars were the hotter topic on Wall Street.

It is quite possible that GM stock will fall back, just as it did when robotaxi hopes faded. The big problem facing GM and its incumbent peers, which the likes of Tesla and Chinese electric-car producer Nio don’t have, is that growth in electric vehicles will undercut its existing profitable business.

But a route out of this self-cannibalizing trap just might be emerging for GM, which would justify a more optimistic valuation: It could license its technology to other car makers. 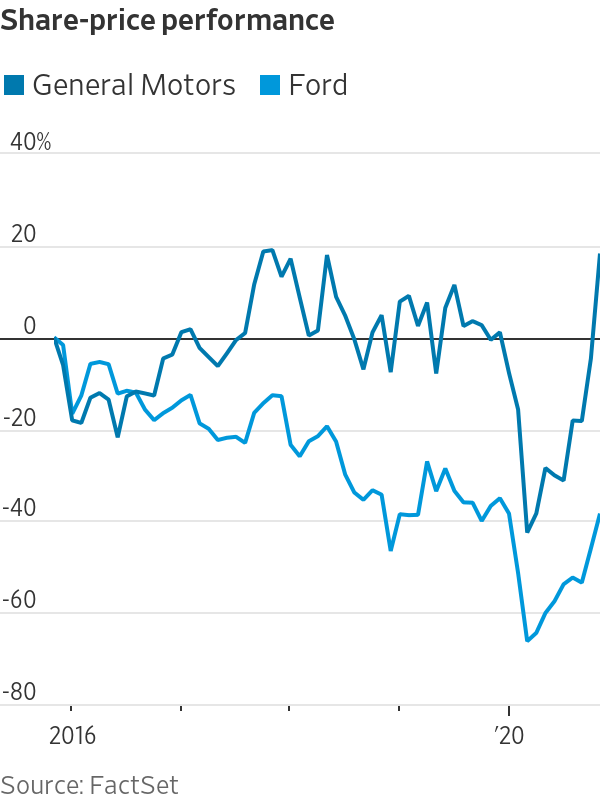 This is starting to happen. Honda will use GM’s electric-vehicle platform for coming models following deals struck this year. And the U.S. company has also signed a provisional agreement to supply its fuel-cell and battery technology to controversial newcomer Nikola, though the transaction has yet to close.

If GM can expand on this strategy, it will take share of the industry supply chain. The high value of the propulsion system within electric cars means the resulting growth could be meaningful, giving investors a reason to own the stock again. This could even shake a bit of excess capacity out of the industry, benefiting margins: Platform sharing is a form of consolidation without the political and cultural controversies that plague full mergers.

Meanwhile, the opportunity for GM most talked about on Wall Street is an electric-vehicle spinoff. The idea is superficially seductive to those focused on the relative valuations of Tesla and GM, but ignores the likely impact on the Detroit auto maker’s huge traditional business and all the parts and technology that will be shared by regular cars and their electric equivalents. It may be exciting to model, but it would be tough to achieve in practice.

There are also plenty of hurdles on the road to GM becoming a large-scale industry supplier. Most auto makers are now looking to invest in their own battery technology rather than use another’s. And GM’s new systems, jointly developed with South Korea’s
LG Chem,
aren’t yet proven. Sixty-nine thousand Chevrolet Bolt electric vehicles containing a previous generation of battery technology supplied solely by LG Chem were recalled last week due to battery fires.

Still, if GM’s vast technology investments add up to a credible growth strategy, it will be in the supply chain. For auto makers, the route to permanently higher valuations isn’t through financial engineering, but old-fashioned industrial engineering.

Dozens of new electric-vehicle models are expected to arrive at dealerships in the next few years. We followed eight Wall Street Journal reporters in four countries to see if they, and the world, are ready to make the switch.

Slack, Tesla, Moderna: What to Watch When the Stock Market Opens...