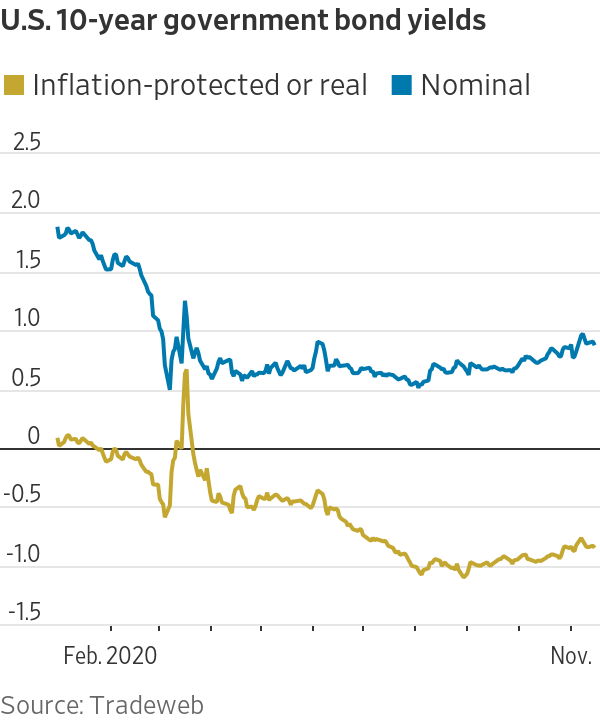 Optimism about Covid-19 vaccines is raising hopes the economy will recover faster than expected. Investors are betting a rebound won’t come with a bout of inflation.

Investors began exiting 10-year Treasury inflation-protected securities, or TIPS, after the U.S. election, as hopes for a large fiscal stimulus package began receding and worries about inflation abated. The yield on TIPS, known as the real yield, rose to minus 0.768% on Nov. 9, the highest level since early July. It had fallen to an all-time low of minus 1.104% at the end of August.

The TIPS yield has since again edged down modestly, and was at minus 0.852% Tuesday. Meanwhile, the yield on regular 10-year Treasurys has climbed to 0.872%, from 0.692% at the end of August. Yields rise when bond prices fall.

Debt investors are particularly sensitive to inflation because their cash flow is often fixed, which means the income will be worth less when prices are rising. TIPS increase their payout to holders if inflation measures exceed certain thresholds.

The extent to which prices may rise has been a key question in markets this year.

The pandemic has triggered unprecedented levels of stimulus from central banks and governments. The Federal Reserve has said it would keep buying bonds to backstop markets. It will also allow inflation to exceed its 2% target as long as it averages this level over several years. This stoked concerns about hyperinflation, though there are no signs of it yet.

Real yields fell further into negative territory in recent months as investors rushed to buy TIPS in a wager that inflation would pick up pace, and dropped to a record at the end of August. Gold, an investment that is also seen as a hedge, rose to an all-time high in August.

But a spike in prices hasn’t materialized. Data Thursday showed that consumer prices in the U.S. were flat in October from the previous month. 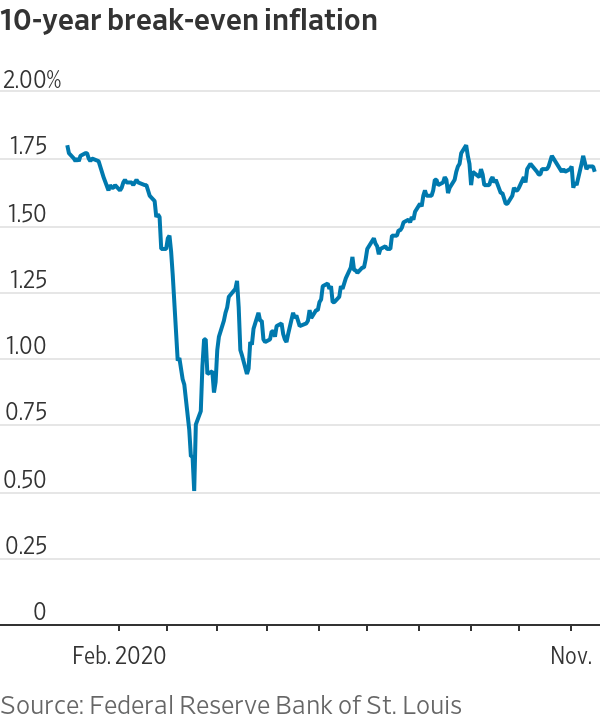 Longer term, expectations haven’t changed significantly. The U.S. 10-year inflation break-even rate, a measure of how much inflation investors expect annually over the next decade, was largely flat at 1.72% on Monday, compared with 1.77% at the end of last year. At this year’s highest, it was about 1.8% in August.

The pandemic and subsequent lockdowns throughout the world have hit the economy and prices on both demand and supply. Unemployment at historically high levels, particularly in the U.S., and stay-at-home orders have transformed consumer-spending habits.

Store closures and benchmark oil prices that are about 30% lower than the start of the year have also affected the supply side, although higher transportation costs have partially offset this.

Vaccines from
Moderna Inc.
and
Pfizer Inc.
could help the global economy recover quickly once they are rolled out. Some investors are betting that the potential availability of those vaccines may reduce support in Congress for a large coronavirus-relief package in coming months.

But the vaccines may not be available widely until well into next year. In the near term, additional lockdowns in the U.S. look increasingly likely, as coronavirus cases and hospitalization rates have risen to record levels.

“That’s putting a dampener on our optimism in terms of the scale of growth and inflation,” said Adam Skerry, a rates and inflation fund manager at Aberdeen Standard Investments. “We’ve been long inflation, with a positive view on the recovery story, particularly because of very loose monetary and fiscal stimulus working in tandem. Now we’re starting to question that.”

Mr. Skerry, who had been betting that inflation would rise, is now taking a neutral position and selling some inflation-linked Australian and U.S. government bonds.

Even if there is a big stimulus package, what it would do for inflation remains unclear.