Investors have lost their appetite for U.K. stocks amid deadlocked Brexit talks, rising coronavirus infections and a sharp economic downturn. 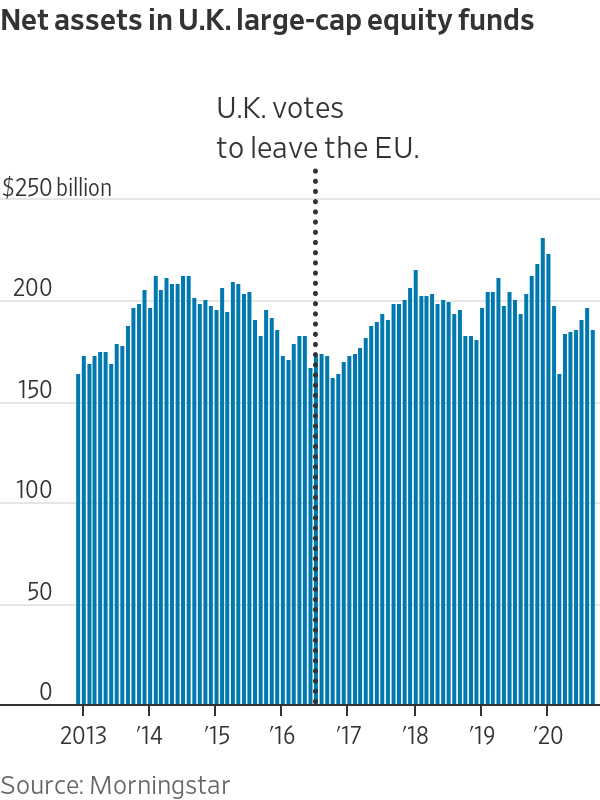 Investors say the Covid crisis has impacted the U.K. worse than many other major economies.

“The Covid situation has definitely hit us as hard really as anybody else, [and] the nature of our economy being heavily service-driven and consumer-driven will be definitely damaged more than an export or manufacturing economy,” said James Athey, senior investment manager at Aberdeen Standard Investments. “In the very near term, I would say the U.K. doesn’t look particularly attractive.”

Coronavirus cases were rising by around 96,000 a day in England in October, according to Imperial College London, causing Prime Minister Boris Johnson to impose another lockdown in England to contain the spread.

Brexit adds further uncertainty to markets, with less than two months to strike a trade deal with the European Union before the U.K. loses regulatory parity with the bloc by default.

Since August, when the likelihood of reaching a deal diminished, and after Prime Minister Boris Johnson said in September the U.K. would break international law to override last year’s withdrawal agreement, there have been clues markets were pricing in a hard Brexit. 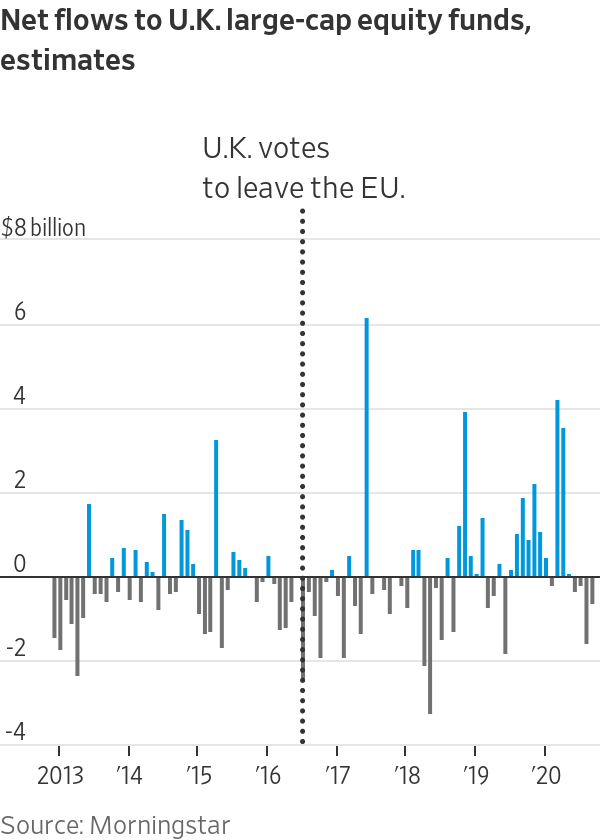 Investors pulled $641 million from U.K. large-cap equity funds in September, according to data provider
Morningstar.
The figure for August was even higher, with net withdrawals of $1.6 billion. That was the largest monthly outflow since $1.8 billion left such funds in June 2019.

In the wake of the pandemic, the government has injected billions of pounds of fiscal stimulus into the economy, and the Bank of England said Thursday it would step up bond purchases as the second wave of infections and the new lockdown threaten to crimp the economy. The central bank forecasts the economy will shrink 11% in 2020.

Government borrowing is projected this year to climb to around £350 billion, equivalent to $464 billion, or around 17% of gross domestic product, according to an estimate by the Institute for Fiscal Studies.

The U.K. has an “unenviable mix of one of the biggest fiscal spending packages in the world, but one of the worst growth outcomes,” said NatWest Markets’s Global Head of Desk Strategy James McCormick.

“The U.K. equity market appears to be great value at the moment, but the question is, is it a value trap?” said Mr. Beaumont, referring to mature companies delivering healthy dividends for shareholders now, but with poor prospects for growth. He is slightly underweight U.K. stocks, seeing British indexes as full of old-line industrial and financial companies that have suffered during the pandemic.

Mr. Beaumont said the exodus of capital is mainly flowing to the tech-heavy growth stocks that investors hope will outperform. There are fewer fast-growing tech stocks in the U.K.

Sterling has gained ground in recent months, complicating the picture for companies. It rose from $1.25 at the start of July to a high of $1.34 on Sept. 1, and is currently trading at around $1.32.

The main equity indexes have a high concentration of firms that make much of their money outside the U.K. and benefit from a weak pound. In a typical year, around 70% of revenues generated by FTSE 100 firms and around 50% for FTSE 250 companies is drawn from overseas operations.

“A lot of the U.K. stocks are essentially foreign stocks listed in the U.K., so they could do well if sterling goes down,” said Tristan Hanson, multiasset fund manager at M&G Investments.

The U.K. is finally leaving the EU, but the Brexit drama isn’t over, as the country enters a new phase of negotiations with its trading partners. (Originally published Jan. 31, 2020)

Some investors are more positive about the U.K.’s economic outlook and think now is the time to buy.

“The U.K. [market] is in the bargain bin,” said Mr. Spencer, who believes there is a good chance of some form of Brexit deal before the end of the year. “This could prove to be the best buying opportunity in 40 years.”

“We saw on Monday a vast rotation out of growth and U.S. tech [stocks] and into value [stocks],” said Mr. Beaumont, who added that the shift was a “drop in the ocean compared to how much growth has outperformed value in the last three years.”

Mr. Beaumont hasn’t changing his slightly underweight U.K. equities position and is likely to await a Brexit agreement before adjusting his strategy.

The pockets of optimism remain in conflict with investor outflows. With Brexit negotiations dragging and Covid-19 uncontrolled, “the U.K. has a problem right now,” said Mr. McCormick.

Walmart has another stellar quarter

Why Pompeo’s Israel Speech Against BDS and for Jewish Communities in Judea and Samaria...