TOKYO—As the world’s two biggest economies, the U.S. and China send scores of startups to the public markets—some at jaw-dropping valuations—yet Japan, at No. 3, has been lagging far behind.

The Japanese government wants to kick its startup scene into higher gear, but it won’t be easy.

The country’s star initial public offering in technology this year, and one of the biggest in recent years, is online marketing-tool developer Plaid Co., whose opening trade on Dec. 18 gave it a valuation of around $1.1 billion. Meanwhile,
Airbnb Inc.
opened this month at a valuation of $102 billion, the largest in a series of blockbuster U.S. listings, while China’s JD Health International Inc. made its debut in Hong Kong at a market capitalization of roughly $38 billion, capping a bumper year for IPOs there.

Japan lacks the self-reinforcing mix of young innovators and financiers that has made places like Silicon Valley and Hangzhou in China, hotbeds of growth. But venture capitalists and entrepreneurs say things are improving. The amount of money startups raise in Japan has increased by more than seven times over the past seven years, to about $4.8 billion in 2019, according to Tokyo-based data tracker Initial Inc.

Venture funds are getting bigger, and the government is pouring in money. A unit of government-owned Japan Investment Corp., or JIC, created a $1.2 billion venture-capital fund this year, the country’s biggest. In recent weeks, it invested nearly $100 million into an initial group of seven companies.

Japan’s Parliament is set to approve early in the new year a fund of nearly $20 billion to be invested over the next decade in environmental innovation. The government hopes to direct public money to strategic areas with high growth potential—such as helping Japan’s famously analog businesses go digital—while stimulating private investment.

“It will help to have an investor with the ability to orchestrate” relationships with big businesses and government organizations, said

Takashi Sonoda,
founder of Tokyo-based Uhuru Corp., a JIC venture-funding recipient that creates software to manage networks of sensors and other devices.

Previous state-backed investors have stumbled. An initial government fund set up in 2009 to support innovative businesses ended up spending the bulk of its money to prop up struggling hardware companies. Two years ago, most of JIC’s first board resigned after a fight with the government over salaries.

But industry watchers say government support has helped the startup world shed a once-disreputable image and take on a measure of Silicon Valley cool.

James Riney,
founding partner and chief executive of Tokyo-based Coral Capital, which grew out of the Japan arm of U.S.-based venture fund 500 Startups.

Still, Japan’s venture-deal volume last year was less than a tenth of China’s and 3% of the U.S.’s, according to figures from data providers PitchBook and Initial. In the first six months of 2020, Japanese startup funding sank slightly compared with the previous year to $1.9 billion, while U.S. venture-deal volume rose a bit. 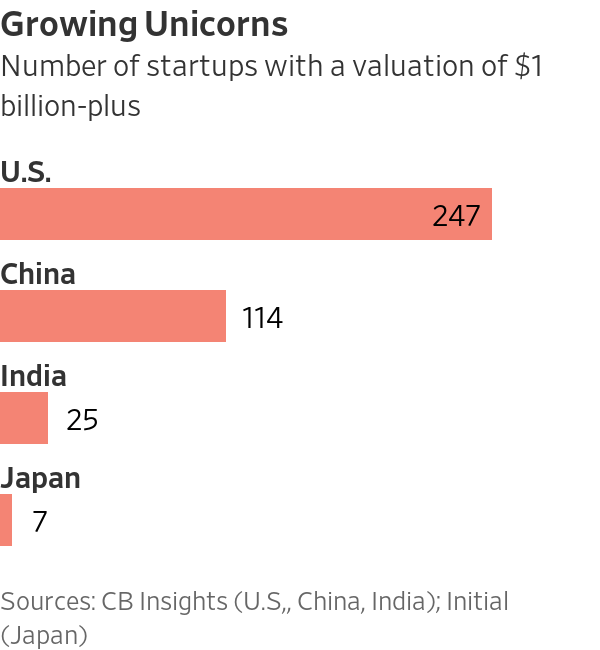 Japan not only lags behind the U.S. and China but also has fewer $1 billion-valued “unicorns” than developing nations such as India. Even Tokyo-based
SoftBank Group Corp.
, the world’s biggest tech investor, has shown little interest in funding homegrown startups.

Compared with most other mature economies, even those in slower-growing Europe, Japan “has a long way to go,” said

Japanese venture-investment volume would have to increase by around five or six times to get to a more appropriate size relative to its economy, Mr. Yarimizu said. He said he expected that would happen slowly over five to 10 years.

For decades, big corporations were at the heart of the country’s economy and business culture, and the path to success was seen as leading from a top-tier university to blue chips such as
Sony Corp.
or
Toyota Motor Corp.

Those companies carefully guarded their proprietary technology and supply chains, leaving little space for innovation from the outside, said

Hiroyuki Kuroda,
secretary-general at the Venture Enterprise Center, Japan, a foundation formed in 1975 to support startups.

In a survey of startup founders by the Venture Enterprise Center this year, more than a fifth said people around them had been opposed to their starting a company. About 45% of those encountering opposition cited resistance from their mothers and 38% from former bosses or colleagues.

The polled entrepreneurs cited broad disapproval of making money as a top factor they hoped would change. And Japan tends to be more unforgiving about business flops than the U.S., meaning fewer companies are formed, said Initial analyst

Write to Phred Dvorak at phred.dvorak@wsj.com

A Poshmark seller nabbed over $12,000 by buying stock in the company's successful IPO....

How one hacker's push to secure the internet became a crucial part of Mac,...

Consumers Could Use Some Help This Winter

Imran Khan under 'immense pressure' to resign by Jan 31: PML-N

Investors Diurnal Team - January 13, 2021 0
IHS Markit reports a 1% annualised decline in its fourth-quarter revenue. The information provider tops analysts' estimates for profit in Q4. Markit says financial services revenue was 7% higher in the fourth quarter. IHS Markit Ltd. (NYSE: INFO) said on Wednesday that its adjusted profit in the fiscal fourth quarter topped analysts’ expectations. Revenue in Q4, however, came in line with what experts had forecast. The American-British information provider said that a few of its end markets that took a hit due to the ongoing Coronavirus pandemic continued to recover in recent months. Markit shares closed the regular session about 2% down on Wednesday. The stock is currently trading at £62.76 per share. In comparison, it had plummeted to as low as £33.28 per share in March 2020. Learn more about how do people make money on the stock market. Are you looking for fast-news, hot-tips and market analysis? Sign-up for the Invezz newsletter, today. Markit’s Q4 financial results versus analysts’ estimates Markit said that its net income in the fourth quarter printed at £110.78 million that translates to 27.86 pence per share. In the same quarter last year, its net income stood at a higher £148.90 million,
Economy