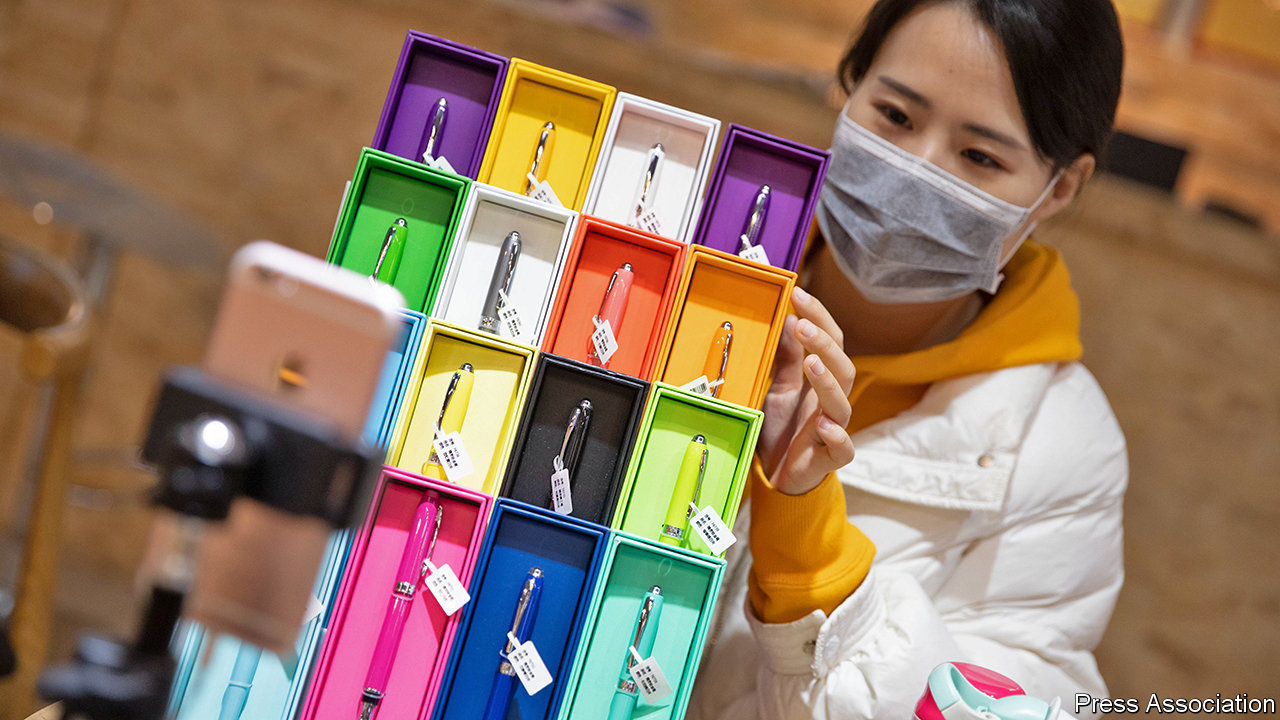 “WE AIM TO be the most customer-obsessed company in the world,” declares the opening line in the 700-page prospectus from Kuaishou, a Chinese video app. The firm, launched a decade ago by a former software engineer at Google and another at Hewlett-Packard, boasts more than 250m daily active users, up from an average of just 67m in 2017. Kuaishou is expected to hit a valuation of around $50bn when it goes public next month in Hong Kong. That would lift it above better-known social-media titans like Twitter (worth $37bn).

Kuaishou’s revenues have soared in recent years, reaching 25bn yuan ($3.6bn) in the first six months of 2020, up by nearly half on the previous year. Just over two-thirds of this came from what the firm calls “live-stream gifting”. It hosted nearly 1bn live-streaming sessions in that period, taking a cut on “tips” that viewers shower on their favourite live-streamers. A tip can be as small as 10 fen (1.5 cents) or as generous as 2,000 yuan. Performers film themselves singing, dancing, otherwise prancing or just sunbathing. (Pornography is strictly prohibited.) New stars can expect to fork half of their tips over to the platform.

Amid this exuberance two threats loom. The first comes from China’s increasingly hands-on regulators (see article). In November they mandated that video apps like Kuaishou impose daily and monthly limits on the amount that users can tip live-streamers. Moreover, to prevent impressionable minors from being coaxed into sponsoring cunning broadcasters, platforms have been instructed to perform tougher background checks on users with such tools as facial-recognition technology. Bureaucrats in Beijing have yet to work out precisely what Kuaishou’s daily and monthly ceilings ought to be. But growth will probably slow down once the details are hashed out.

Douyin, TikTok’s Chinese sister app and Kuaishou’s arch-rival, is better insulated from the regulatory crackdown. Like Kuaishou, it operates a live-streaming business. But unlike its competitor, it earns most of its revenues from online ads, which the new rules do not affect. For comparison, adverts accounted for just 28% of Kuaishou’s revenue mix in the first half of 2020. The company may now try to raise that share. To do so Kuaishou will have to overcome the somewhat outdated perception that its users are disproportionately folk living in small cities and rural areas with less money to buy advertised wares.

The second threat is the potential for a price war between Kuaishou and Douyin. For both platforms, user growth is largely a function of the appeal of their video content, which in turn depends on the calibre of the producers behind it. A race to the bottom, whereby each firm lowers its “take rate” on tips and ad sales to lure popular broadcasters from the other app, would depress margins.

At the moment neither company has a particular incentive to shatter the cosy duopoly, points out Jeffrey Young of Grandly Asset Management, a broker. But the possible arrival of a big competitor—not inconceivable in China’s effervescent e-economy—could disrupt this equilibrium, Mr Young suggests.

Despite its domestic challenges (or maybe because of them), Kuaishou is proceeding apace with its global ambitions. The international version of its app, Kwai, claims “tens of millions” of users in markets from Brazil and Colombia to Malaysia and Vietnam. It still lacks the name-recognition of TikTok, though that may prove to be a blessing in disguise. Kwai has thus far avoided the sort of political scrutiny that its better-known rival has attracted in many foreign markets. ■

Crypto.com (CRO) price continues its plunge, now down 20% in December

New York judge's son arrested over riot at US Capitol

Massive tech show will go on, in virtual format

Lululemon expects Q4 sales & earnings to print near the higher end of its...

IM what I am

Investors Diurnal Team - January 11, 2021 0
Wall Street’s largest banks are shutting off the spigot of money to DC in the aftermath of last week’s deadly invasion of the US Capitol. Megabanks like JPMorgan Chase, Goldman Sachs, Citigroup and Morgan Stanley are all pausing some or all of their political giving in light of efforts by a mob of Trump supporters to forcefully interfere with the transfer of power to Joe Biden, leaving five dead. “We paused political contributions last week after the events we witnessed in Washington DC,” Goldman Sachs’ spokesman Jake Siewert said. “And are reviewing our policy to govern whom we support going forward.”  Both JPMorgan and Goldman said they are pausing their giving across party lines for at least six months as they re-evalulate how they use their political action committee money to influence elections in the future. The pauses were communicated by banks to staffers over the weekend as contributions to so-called PACs are collected from employees. “The terrible events from the last week have prompted us to pause and re-evaluate our PAC giving strategies,” JPMorgan spokesperson Patricia Wexler told The Post. “We believe participating in the political process is essential, and fully intend to continue to support our PAC moving
Business

Investors Diurnal Team - January 20, 2021 0
Jack is back — and investors are relieved. Chinese e-commerce giant Alibaba’s stock price surged Wednesday after billionaire founder Jack Ma made his first public appearance in nearly three months. Alibaba’s US-listed shares jumped 6.8 percent in premarket trading to $268.81 as of 7:03 a.m. after Ma resurfaced at an online ceremony that his charity organized for rural teachers, quelling concerns about his lengthy silence. The English teacher-turned-tech tycoon spoke from a room adorned with floral arrangements and a large painting in a 50-second video that also included footage of Ma visiting a school in China’s Tonglu county last week. Before the brief clip, Ma had not been seen in public since he made an Oct. 24 speech slamming China’s regulatory system. That apparently drew the ire of Chinese officials, who halted the initial public offering of Ma’s digital payments firm, Ant Group, the following month. Ma’s unusual absence stirred speculation earlier this month that he had gone missing — especially after he reportedly failed to appear on the final episode of “Africa’s Business Heroes,” an “Apprentice”-style TV show he created. But Duncan Clark, an investor and adviser on China’s tech sector who’s known Ma for decades, recently told NPR
Business

ASOS warns of a £15 million hit due to the post-Brexit...

Investors Diurnal Team - January 13, 2021 0
ASOS warns of a £15 million hit due to the post-Brexit tariffs. The online fashion retailer reports a 23% growth in sales. The British firm gained roughly 40% in the stock market last year. In an announcement on Wednesday, ASOS plc (LON: ASC) said that trading remained robust during the Christmas period. The company also raised its guidance for profit but warned of a £15 million hit due to the post-Brexit tariffs. ASOS opened about 4% up on Wednesday. It is now trading at £53.46 per share versus a low of £11.64 per share in the first week of April 2020. If you want to invest in the stock market online, you’ll need a reliable stockbroker – here’s a comparison of the top few to make selection easier for you. Are you looking for fast-news, hot-tips and market analysis? Sign-up for the Invezz newsletter, today. ASOS reports a 23% growth in sales In the four months that concluded on 31st December, the online fashion retailer said that its sales topped its forecast, posting an annualised growth of 23%. Focusing entirely on e-commerce, ASOS continued operations last year amidst the COVID-19 crisis that pushed rivals into temporarily shutting their