With few tourists in cities such as Paris and New York this year, luxury brands have had to lean on local shoppers. Their appetite for expensive handbags and watches has been surprisingly strong—a comfort for investors as Covid-19 cases in the West continue to climb.

Spending on luxury goods by Chinese consumers in 2020 will be roughly one-third lower than last year, according to estimates released Wednesday by consulting firm Bain & Company. American and European shoppers are proving more resilient, spending a projected 15% less. Partly thanks to these more mature markets, Bain now forecasts that global luxury sales will be down 22% this year, compared with an earlier worst-case estimate of a 35% fall. 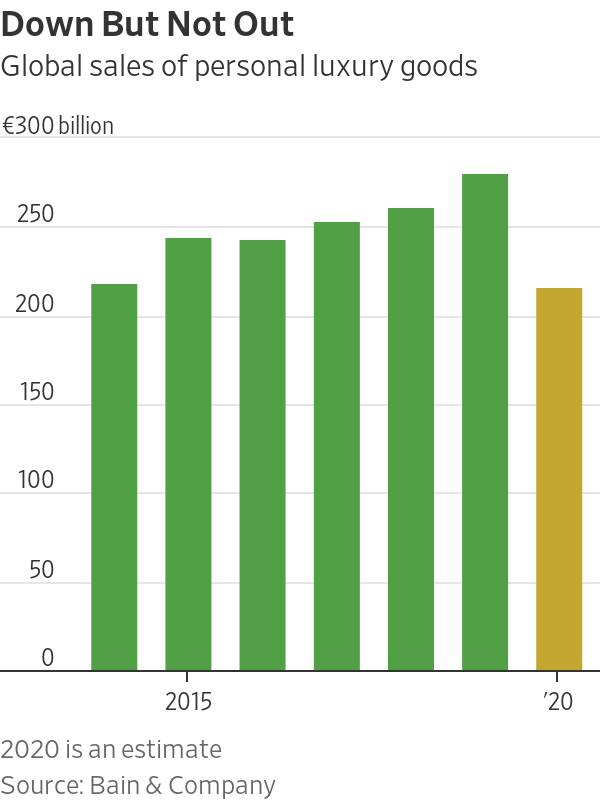 Robust demand from Western consumers has been an unexpected boost for designer brands, which for years have been focused on the Chinese. Last month, Gucci’s owner Kering said sales in North America increased by 44% in its third quarter, compared with the same period the year before. French competitor
LVMH Moët Hennessy Louis Vuitton
also said sales to Europeans and Americans were up.

This flipping of the normal trend could prove fleeting. Cash that consumers on both sides of the Atlantic would otherwise spend in restaurants or on travel wound up in the tills of luxury brands during lockdowns. Labels will face more normal competition for spending once a vaccine is rolled out next year.

Conversely, Chinese sales will likely bounce back as global travel resumes. They lagged behind for reasons of timing and logistics rather than economic weakness: Asia was hit by the virus during the first quarter, so consumers couldn’t get out to shop for China’s Lunar New Year. Some price-conscious Chinese are waiting until they can travel again to make luxury purchases, which are cheaper in Europe. And many brands didn’t have enough stores in mainland China to recoup sales lost elsewhere. Before the pandemic, the Chinese made 70% of their luxury purchases overseas.

There are signs that heavy investment in digital advertising attracted new and younger buyers in all markets. Around 50% of the luxury goods bought this year have been entry-level products, according to Bain. That is a promising sign, but the spending power of these groups also could dwindle as job losses creep up in Europe and the U.S. Youth unemployment in the eurozone was 17.6% in September, up from 15.9% in the same month of 2019, Eurostat data show.

The relative resilience of luxury goods sales this year helps to explain the sector’s high stock prices. Shares in LVMH, which owns a big duty free and hotel business, are up 13% at a new high since
Pfizer
announced its strong Covid-19 vaccine results last week. Investors seem to see the luxury conglomerate as both defensive and exposed to the recovery—one reason it could afford to follow through with the takeover of Tiffany at only a modest discount to the pre-pandemic price.

It is reassuring for luxury investors that brands have a hedge against ongoing travel disruptions caused by the second wave. Luxury sales would benefit from an end to the crisis, but they don’t need it as much as was once assumed.

Americans brace for Covid 'surge upon a surge'

Investors Diurnal Team - November 13, 2020 0
Covid-19 is wreaking havoc on the market for risky municipal bonds. Investors desperate for tax-exempt yield are still piling in. Fixed-income returns that come with a tax break have become so precious to affluent American households that they are willing to overlook a spike in defaults, growing reports of repayment trouble and contagion risks of communal living projects. The S&P Municipal Bond High Yield Index is now only about 1% lower than its pre-coronavirus pandemic level, despite falling 15% in March as global shutdowns roiled the market. The Federal Reserve stepped in at that time to backstop a variety of assets including municipal bonds, resetting investor expectations about how much risk the pandemic poses to a range of markets from stocks to commodities to corporate and muni debt.
Economy

Nvidia, Simon Property Group, BNY Mellon: What to Watch When the...