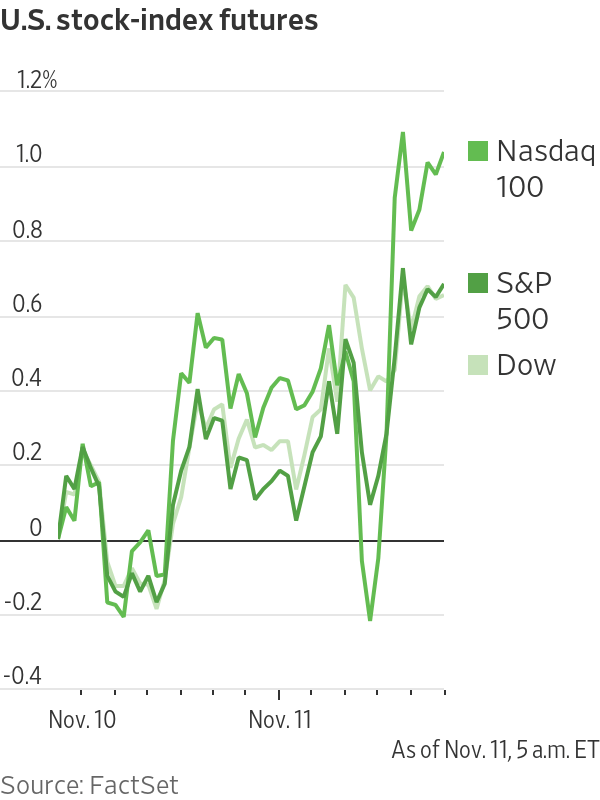 Here’s what we are watching as markets kick into gear Wednesday.

Lyft
rose 5.8% premarket after the ride-hailing company yesterday said active riders and revenue improved in the third quarter from the previous three months as coronavirus shutdowns eased in some cities.

Datadog
fell 9.8% premarket despite the cloud-monitoring company reporting earnings and an outlook that exceed analyst estimates.

A Covid-19 Vaccine Would Boost the Global Economy, but Not All at Once

With Ant IPO in Limbo, Funds Let Investors Cash Out

Tesla just settled its years-long lawsuit with a whistleblower who enraged Elon Musk. But...

Investors Diurnal Team - November 11, 2020 0
For 40 years, the legacy of Proposition 13, a landmark California law that limits property tax increases, has shaped state politics. The measure weathered various legislative and legal challenges, including a trip to the Supreme Court, and came to be considered untouchable.Now the law has survived perhaps its biggest test after California voters rejected a ballot initiative that would have undone a portion of Proposition 13. The new law, Proposition 15, would have removed commercial properties like office buildings and industrial parks from Proposition 13’s limits, and it would have given labor and progressive groups a long-sought victory to increase funding for education and local services.The Associated Press called the result of the Nov. 3 vote on the measure on Tuesday night, when the count was 51.8 percent to 48.2 percent against it.“This is an important moment in California political history — the biggest attempt to reform Proposition 13,” said Manuel Pastor, an author and sociology professor at the University of Southern California. “Given that this is the third rail of California politics, it actually came pretty close with very significant headwinds including a recession, and the limits the pandemic placed on door-knocking and other high-touch voter contact.”Proposition 15 would