Tsinghua Unigroup Co., a key player in China’s push for self-reliance in semiconductors, has defaulted on a bond, adding to a recent spate of trouble in the country’s corporate debt markets.

China Chengxin Credit Rating Group said late Monday that Unigroup was in default on the privately placed domestic bond, worth 1.3 billion yuan, equivalent to $197 million. The ratings company said Unigroup had failed to reach agreement with creditors to extend the repayment deadline.

Chengxin cut Unigroup to triple-B—a grade that signals a high degree of risk in the Chinese credit-rating system—and said the default could trigger cross-defaults on some other Unigroup debt. Unigroup didn’t respond to requests for comment. 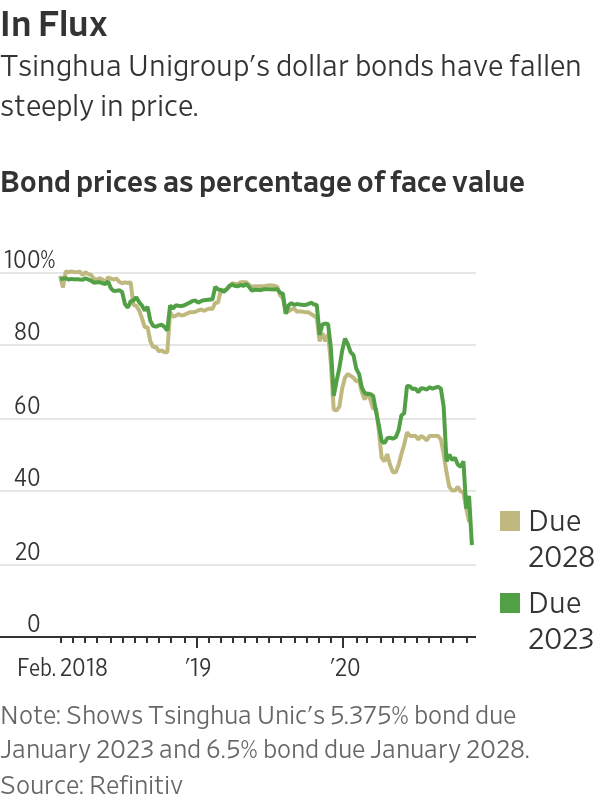 The financial difficulties are striking for a company which in 2015 made headlines with a $23 billion bid for U.S. memory-chip maker Micron Technology Inc., and which has enjoyed huge state backing. Last year, an Organization for Economic Cooperation and Development study of 21 global semiconductor companies ranked Unigroup top for government support received from 2014 to 2018.

China is investing heavily in computer chips and stepping up efforts to cultivate homegrown talent as it accelerates its quest for technological self-sufficiency.

Unigroup has been an active borrower internationally, and has at least $2.45 billion of bonds in dollars. Some of these come due in December, with others maturing in 2021, 2023, and 2028.

Those bonds are already trading at deep discounts to face value, suggesting investors doubt they will be repaid in full. The Wall Street Journal couldn’t establish whether the onshore default would trigger cross-default provisions on the international bonds.

Unigroup later reassured the market by securing fresh credit lines and a partnership with an investment vehicle backed by the local government of Chongqing, a city in Western China. But a fresh selloff began in late October, after Unigroup chose not to redeem a perpetual bond, despite widespread expectations it would buy the debt back.

Chengxin, the rating company, estimates Unigroup at the end of September had debts of 52.8 billion yuan, equivalent to $8 billion, and cash of 4 billion yuan, or about $608 million. More than 60% of the debt is short-term.

Unigroup owns Unisoc, one of China’s biggest mobile-chip designers. It also controls Yangtze Memory Technologies Co. in Wuhan, which operates a fab, or chip-making facility, that is focused on NAND flash memory. The unit is a rising competitor to global market leader
Samsung Electronics Co.

Dan Wang, a Beijing-based technology analyst at Gavekal Dragonomics, said Unigroup was a major player in China’s semiconductor industry, with important roles in making memory chips and chip design. However, he said it was a classic state-owned enterprise that was eager to follow political orders and was ambitious in creating new ventures in the chip-manufacturing supply chain, but which wasn’t very successful in producing first-class products.

“Tsinghua Unigroup has many business lines, but none of its products are on the technological cutting edge. YMTC, for example, is still not producing in large volumes, while its memory technology is still regarded as being behind the industry leaders,” he said.

China’s corporate bond market has been roiled by other upsets in recent days. A coal miner and an automotive group, both of which are state-backed, have failed to repay bondholders on time.

Write to Xie Yu at Yu.Xie@wsj.com

What a Joe Biden Presidency Will Mean for Markets

Brazil's Jair Bolsonaro says he will not take coronavirus vaccine

Slack, Tesla, Moderna: What to Watch When the Stock Market Opens...

Investors Diurnal Team - October 30, 2020 0
The coronavirus recession has been more severe in Democratic-leaning places than in Republican-leaning ones. Blue states like Massachusetts and California have had steeper job losses, higher unemployment and bigger drops in job postings than red states like Utah and Missouri.It turns out that most of this partisan gap in economic suffering is because of the different mix of jobs in red and blue places.The partisan jobs gap has been fairly consistent throughout the pandemic. Employment in blue states fell more in the first two months, and the cumulative employment decline has remained significantly worse in blue states than in red states since June. [embedded content]The consistency of the partisan jobs gap contrasts with a shifting pattern of infections and deaths. In the spring, infection rates were far higher in blue states than in red states, with deaths even more skewed toward blue states, especially in and around New York. But the jobs gap has persisted even though red states have had higher case rates than blue states since June, and higher death rates since July.The partisan gap in jobs hasn’t gone away because it’s rooted in fundamental economic differences related to job types. The worst job losses have been in
Economy