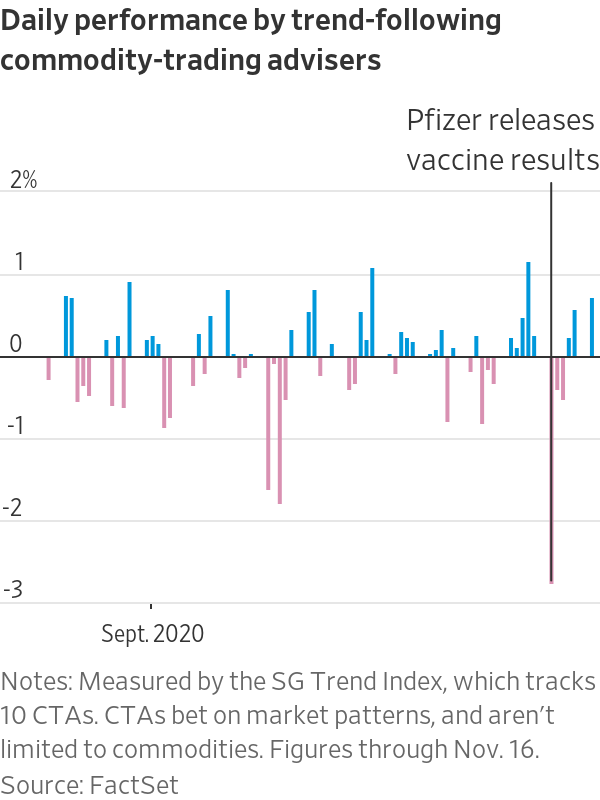 An abrupt reversal in many of this year’s most-persistent market trends has hurt a cluster of computer-driven funds.

Caution gave way to euphoria in financial markets when
Pfizer Inc.
and
BioNTech SE
said their coronavirus vaccine was more than 90% effective on Nov. 9. Shares of companies that have suffered in the pandemic leapt, as did government-bond yields and energy prices—a pattern that repeated with the arrival of promising results for
Moderna Inc.’s
vaccine Monday.

That was bad news for investors who aim to ride winning assets higher and losing markets lower, a popular quantitative strategy known as momentum investing. A gauge of performance by members of the S&P 500 classified as momentum stocks slumped almost 14% on Nov. 9, according to JPMorgan Chase & Co. That was the biggest one-day loss for the grouping since at least the mid-1980s.

Among those caught out: A momentum fund run by AQR Capital Management LLC that manages $3.4 billion in stock, bond, commodity and currency futures. Class I shares in the mutual fund dropped 2.9% on the day of the Pfizer news, according to FactSet, one of their worst days since inception in 2010. A spokesman declined to comment.

AlphaSimplex Group LLC was another to feel the pain. Stung by bets against oil and bond yields, as well as wagers on haven currencies like Japan’s yen, the firm’s managed futures fund lost 2.6%, its second-biggest fall of 2020. Profitable bets on agricultural commodities and stocks cushioned the blow, and the fund is up over 7% for the year. 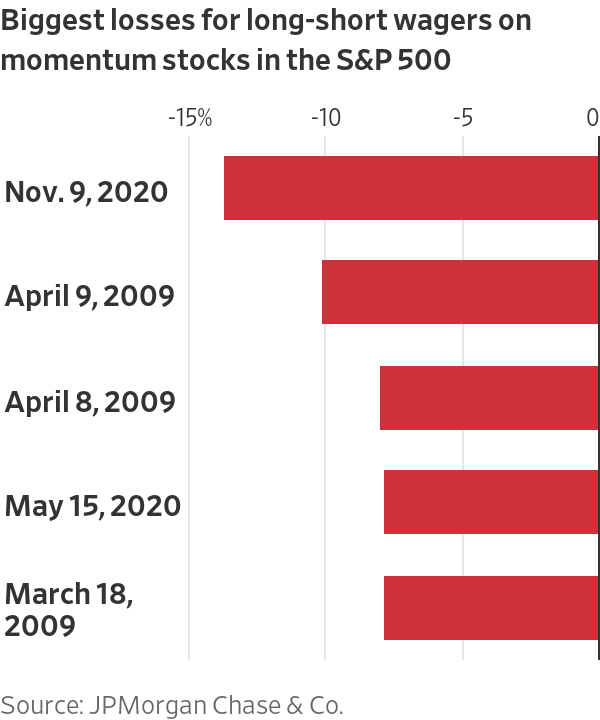 “We definitely got hit by that massive move in yields,” said portfolio manager Kathryn Kaminski. “Anything that had been your friend throughout Covid was now coming back” to earth, she added.

Though small, the losses demonstrate how funds that aim to capitalize on existing trends are exposed when markets turn. Momentum funds suffered in the spring of 2009, when the U.S. stock market rebounded from the financial crisis.

The blow also highlights the risks involved in piling into crowded trades that investors exit en masse when prices turn against them. This dynamic was one of the main reasons why quantitative hedge funds that focus on stocks notched their worst two-day performance since March last week, down 2.9%, according to estimates from
Goldman Sachs Group Inc.
Quantitative strategies had $972 billion in assets as of the third quarter, according to data tracker HFR.

Do you prefer to invest in trending markets? Why or why not? Join the conversation below.

Momentum funds weren’t the only ones to be burned. Funds betting on tech stocks that had benefited from the stay-at-home craze also lost out last week. ARK Innovation ETF, with $10 billion in assets under management, invests in companies benefiting from “disruptive innovation” such as
Spotify Technology SA,
Slack Technologies Inc.
and
Zoom Video Communications Inc.
The fund was down 4.6% on Nov. 9. It fell 2.7% the following day before recovering more than 4% on Nov. 11.

Investors in the recent rotation moved into stocks in industries that “we believe are particularly at risk” of being upended long term, said Ren Leggi, ARK’s client portfolio manager, including pharmaceuticals, banks, energy and automotive. He believes the current rotation will be short lived as industry incumbents are displaced, and that investors in value stocks might face more risk than they have historically.

“Longer-term we expect the rotation to reverse and shift in favor of innovation and growth,” he added.

Proponents of momentum investing, such as AQR’s billionaire co-founder, Clifford Asness, point to evidence that the strategy has paid off for over two centuries in the U.S. stock market. Still, the past few years have been tough, in part because of a series of shifts in stock-market leadership.

These reversals, involving rallies in value stocks such as banks and energy producers that trade at low multiples of their net worth, typically proved fleeting. They have tended to coincide with sudden moves in bond yields, as in September 2019. Such is the potential for vaccines to revive industries that languished during the pandemic that many investors think the current rotation has room to run.

Others don’t think the rotation portends a significant shift, and believe that value stocks in sectors such as retail were cheap due to secular trends that Covid merely exacerbated. Either way, some traders think investor positioning means more swings are in store for stocks.

“There are still a lot of short positions in the market,” said Pierino Ursone, an options trader at Dutch firm Webb Traders.

Losses can be self-fueling. Trend-following algorithmic funds rushed to close out losing wagers against crude oil, the FTSE 100 and other markets when prices jumped on Nov. 9, according to analysis by Bridgeton Research Group LLC. Funds bought back futures they had sold short when prices passed certain levels, giving them a further boost.

Some allocators to hedge funds aren’t worried. Jens Foehrenbach, chief investment officer of Man FRM, a division of
Man Group
PLC that allocates to hedge funds and advises on such investments, said he isn’t making changes to his strategy based on last week’s rotation. “Maybe it was a paradigm shift, maybe not. It doesn’t change our broader view” of the funds in which Man FRM is invested.

Write to Joe Wallace at Joe.Wallace@wsj.com and Julie Steinberg at julie.steinberg@wsj.com