Home Markets Millions of Americans have been out of work for more than 6...
Facebook
Twitter
WhatsApp
Linkedin
Email 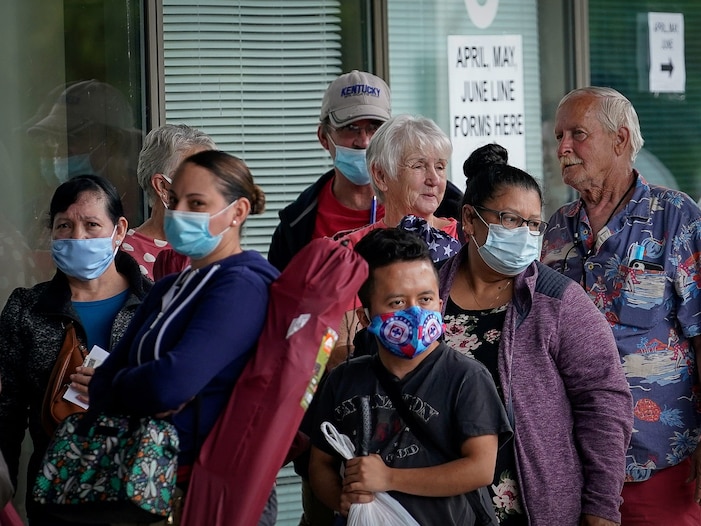 In December 2020, the US lost 140,000 nonfarm payroll jobs. But in addition to that surprise decline, there’s an important demographic lingering in the story of American unemployment: those who have already been unemployed for months.

The following chart highlights the rise in the number of Americans who are long-term unemployed, defined by the Bureau of Labor Statistics as being unemployed and looking for work for at least 27 weeks. It is important to note that this data is not seasonally adjusted:

It is possible to look at who makes up the nearly 4 million people who are long-term unemployed. The US Bureau of Labor Statistics provides a breakdown of who is unemployed and for how long have they been out of work. A closer look at the data shows how long-term unemployment varies on gender lines among four different racial and ethnic groups.

The following chart highlights the share of men and women who are at least 16 years old that have been unemployed for at least 27 weeks, by race and ethnicity.

Read more: PPP is now open for all applicants, and experts say the guidance is clearer this time around

“December’s jobs data also indicates that many unemployed people have been out of work for most of the COVID-19 crisis. Among adult women ages 20 and over who were unemployed last month, about 2 in 5 (39.9%) had been out of work for 6 months or longer,” the National Women’s Law Center (NWLC) wrote in an analysis of the most recent employment situation.

President Joe Biden announced a $1.9 trillion stimulus plan which may provide some financial support for the millions who are unemployed. The package, called the “American Rescue Plan,” includes $400 in weekly federal unemployment benefits through September as well as federal unemployment programs for gig workers, per Insider’s Joseph Zeballos-Roig reporting.

And President Biden is also planning a new wave of executive actions, with many aimed at getting immediate help to workers and those suffering the effects of unemployment. Those actions will address everything from hunger to allowing workers to refuse employment that could jeopardize their health while still receiving unemployment benefits.

What is QAnon, the Trump-supporting conspiracy movement?

Investors Diurnal Team - September 2, 2020 0
Global climate innovator Trane Technologies (NYSE: TT) announced today the launch of its Center for Healthy and Efficient Spaces (CHES) to create safer, healthier, and more efficient environments for homes, buildings, and transportation around the globe. Rasha Hasaneen, Trane Technologies’ vice president of innovation and product excellence, will be the center’s director. "Trane Technologies has been a leader in healthy and efficient indoor environments for decades. The global pandemic heightens sensitivity to the need for health and safety, and the overall quality of indoor environments. We are introducing CHES to focus on ensuring that homes, buildings, public transport and other spaces will come out of the pandemic healthier and more sustainable than ever,” said Hasaneen. "Through the center we are responding to urgent and increasing needs for solutions that reduce pathogens, mold, gases and other contaminants in the air we breathe and on the surfaces we touch.* "Whether you’re at home, work, school, on a bus, or in a delivery vehicle, you want to feel safe and well. CHES will go beyond indoor air quality to consider all the factors that impact indoor environments – including lighting, acoustics and optimal temperatures and humidity. We are providing holistic and environmentally sound solutions. The center will take these outcomes to the next level by forming new partnerships, informing policies and standards, and accelerating innovation.” Innovation and Policy Advocacy The CHES is working with technology and innovation companies in the climate sector to evaluate and scale the latest advancements in indoor environments across transport, homes, and a broad installed commercial buildings customer base. It will engage a global team of experts from the company’s commercial and residential HVAC and transport refrigeration businesses. The center will work side-by-side with Trane Technologies’ Center for Energy Efficiency and Sustainability (CEES) to inform policy and standards that elevate indoor environmental quality. CEES is a council of global thought leaders in sustainability leadership, infrastructure development, energy policy, and technology that helps the company enact best practices in sustainability in the company and for its customers. A Better, More Sustainable Normal "The new center will bring together world-leading expertise and technology inside and outside the company to address indoor environment challenges through and beyond the pandemic,” said Paul Camuti, Trane Technologies’ chief technology and strategy officer. "It will expand upon the comprehensive climate, refrigeration, and indoor air quality solutions we already deliver through our brands Trane® and Thermo King®. Together with our partners and customers we are building a new, better, more sustainable normal.” Each indoor space is unique. Interactions between people and the systems that control any indoor environment they occupy, such as HVAC, lighting, and acoustics, are dynamic and complex. The company’s holistic approach includes assessing the indoor environment and recommendations to effectively mitigate and improve a space, whether it’s a home, building, or public transport vehicle. Trane Technologies brings the most advanced solutions available for indoor air quality, ranging from building controls and filtration to air cleaning solutions and connected building solutions that adapt to the evolving needs of a building and its occupants. CHES is one more way the company continues to advance indoor environments as the world faces both a historic pandemic and a climate crisis. Partnering with External Experts Trane Technologies has also established an Advisory Council on Healthy Spaces made up of leading experts who will support CHES goals with expertise in medicine, epidemiology, academic research, and policy, across building and transport sectors. Council members will advise on accelerating safer, healthier, and efficient environments in homes, buildings and transport, and on strategies to build resilience for businesses and communities. In addition, Trane Technologies has become a founding keystone member of the International WELL Building Institute, whose mission is to improve human health and well-being in buildings. Holly Paeper, vice president of Trane’s Commercial HVAC business, will serve as an advisor on the WELL Health-Safety Rating for Sports and Entertainment Venues. Chris Hsieh, commercial applications engineer, will serve as an advisor on the WELL Health-Safety Rating for Facility Operations and Management. For more information on the Center for Healthy and Efficient Spaces, click here. *There is evidence from The American Society of Heating, Refrigerating, and Air-Conditioning Engineers (ASHRAE) and other sources that HVAC technologies can mitigate the risk of exposure to infectious aerosols in built environments; however, the transmission and mitigation of COVID-19 in buildings is yet to be tested and confirmed. About Trane Technologies Trane Technologies is a global climate innovator. Through our strategic brands Trane® and Thermo King®, and our portfolio of environmentally responsible products and services, we bring efficient and sustainable climate solutions to buildings, homes and transportation. Visit tranetechnologies.com. View source version on businesswire.com: https://www.businesswire.com/news/home/20200902005125/en/
Markets

Investors Diurnal Team - January 23, 2021 0
Biopharma stocks advanced yet again in the week ended Jan. 22, with the change of guard at the White House generating broader market strength.Eli Lilly And Co (NYSE:LLY) was the standout biopharma stock of the week, as it set fresh 52-week highs in all four sessions of the truncated week, the catalysts being an oncology licensing deal with Merus NV (NASDAQ:MRUS), an analyst upgrade and a positive readout for its COVID-19 antibody treatment candidate. News flow on licensing deals and follow-on offerings abounded. The Food and Drug Administration approved two key drugs during the week — Merck & Co., Inc.'s (NYSE:MRK) heart failure drug and a long-acting, injectable combo treatment option for HIV from ViiV Healthcare, a venture established by GlaxoSmithKline plc (NYSE:GSK) and Pfizer Inc. (NYSE:PFE). Aurinia Pharmaceuticals Inc's (NASDAQ:AUPH) voclosporin in combination with a background immunosuppressive therapy regimen was also approved by the agency to treat adult patients with active lupus nephritis. Here are the key catalysts for the unfolding week: Conferences: The International Association for the study of Lung Cancer, or IASLC, World Conference on Lung Cancer (virtual event): Jan. 28-31 PDUFA Dates: The FDA is scheduled to rule on Amgen, Inc.'s (NASDAQ:AMGN) sBLA for Nplate, a protein that raises and sustains platelet counts, as a treatment option for hematopoietic subsyndrome of acute radiation syndrome. The decision is due Thursday, Jan. 28. Related Link: The Gilead, Galapagos Pipeline Opportunities That Are Turning Morgan Stanley Bullish Regulatory Filings: Axsome Therapeutics Inc (NASDAQ:AXSM) expects to file this month a new drug application for its AXS-05 treatment of mild depressive disorder. Clinical Readouts: Rhythm Pharmaceuticals Inc (NASDAQ:RYTM) is scheduled to host a virtual event on Tuesday, Jan. 26, from 8 a.m. to 10 a.m. to provide an update on its ongoing exploratory Phase 2 study and genetic sequencing efforts. The company will present data for setmelanotide in individuals living with heterozygous obesity due to genetic variants in one of two alleles of the POMC, PCSK1 or LEPR gene, as well as SRC1 and SH2B1 deficiency obesities. It will also provide an update on data from its sequencing efforts, which now includes samples from about 37,500 people with severe obesity. Zymeworks Inc (NYSE:ZYME) is due to present a clinical progress update for ZW49, which is being evaluated in a Phase 1 clinical trial as a treatment for patients with locally advanced or metastatic HER2-expressing cancers. The presentation is scheduled for Wednesday, Jan. 27, at 4:30 p.m. January Readouts Johnson & Johnson (NYSE:JNJ): interim results of a Phase 3 clinical trial of its experimental COVID-19 vaccine, JNJ-78436735 GlaxoSmithKline plc (NYSE:GSK)/Vir Biotechnology Inc (NASDAQ:VIR): initial results from the Phase 3 trial of COVID-19 antibody treatment candidate VIR-7831 IASLC World Conference on Lung Cancer Presentations Amgen: Phase 2 data from the CodeBreaK 100 clinical study, evaluating investigational sotorasib in patients with KRAS G12C-mutated advanced non-small cell lung cancer, or NSCLC, (Friday, Jan. 2), and an oral presentation of updated Phase 1 data from AMG 757 in small cell lung cancer Earnings: Tuesday Johnson & Johnson (NYSE:JNJ) (before the market open)Varian Medical Systems, Inc. (NYSE:VAR) (after the close) Wednesday Abbott Laboratories (NYSE:ABT) (before the market open)Edwards Lifesciences Corp (NYSE:EW)(after the close)Hologic, Inc. (NASDAQ:HOLX) (after the close)Taro Pharmaceutical Industries Ltd. (NYSE:TARO) (after the close) Thursday ABIOMED, Inc. (NASDAQ:ABMD) (before the market open)ResMed Inc. (NYSE:RMD) (after the close) Friday Lilly (before the market open) IPOs Raritan, New Jersey-based Ortho Clinical Diagnostics Holdings plc has filed to offer 70 million shares in an initial public offering, expected to be priced between $20 and $23. The pure-play in vitro diagnostics company has applied for listing the shares on the Nasdaq under the ticker symbol OCDX. Related Link: Pfizer-BioNTech Vaccine Found Effective Against New Coronavirus Strain In Lab Study