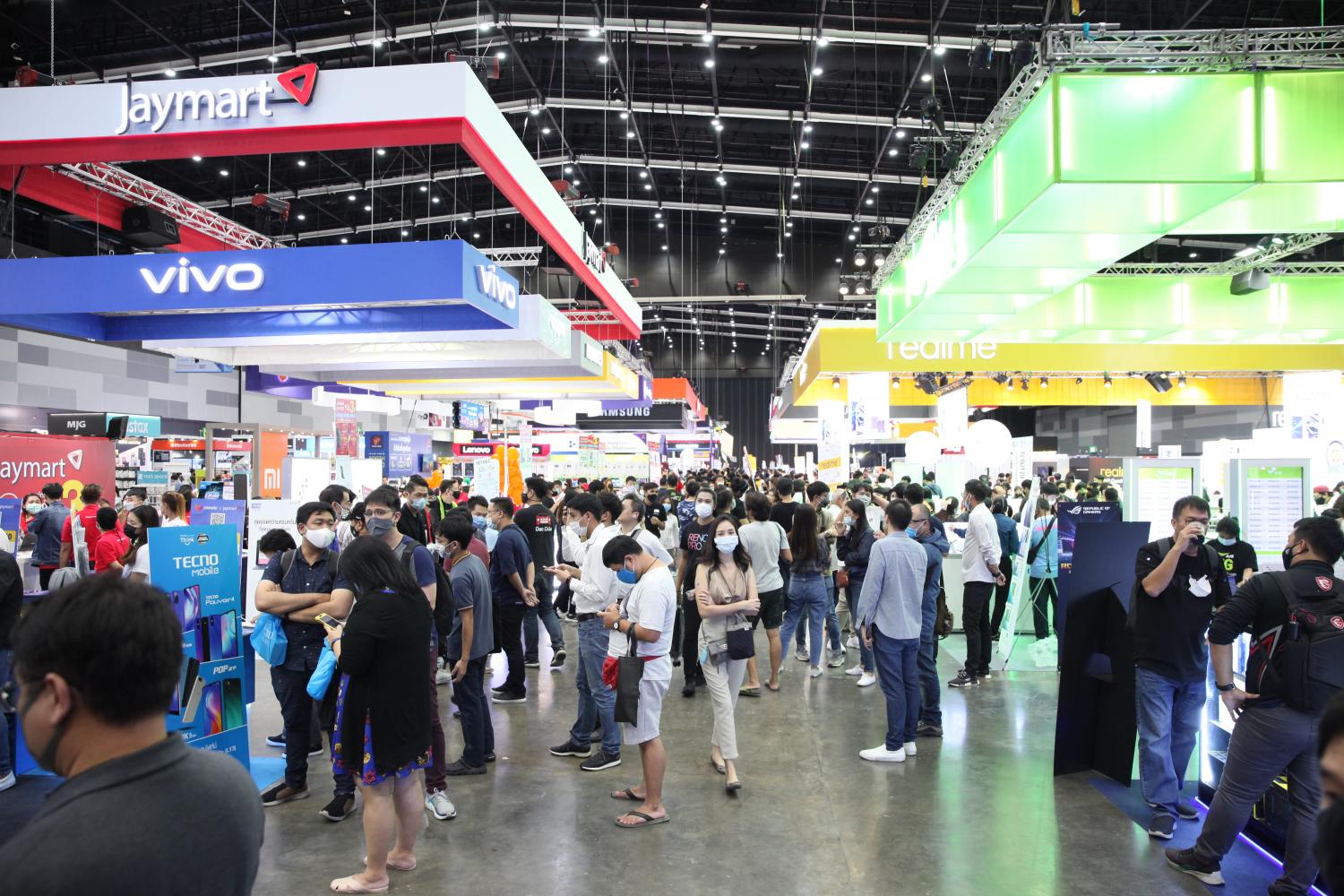 Mobile Expo 2020 is taking place at Bitec Bangna until this Sunday.

The organiser of Thailand Mobile Expo is considering whether to shelve the country’s flagship smartphone trade show next year.

Thailand Mobile Expo is held three times a year. The final fair for this year, spanning four days, kicked off on Thursday.

He said the company will hold a mobile festival next year meant for product clearance.

Many corporations are likely to see a cash crunch as the reprieve on debt repayment will end by this year.

With lower purchasing power, many customers are choosing to hold on to their phones for more than two years, up from the previous practice of 12-18 months.

He said many customers are more interested in budget smartphones.

Apple is likely to usher in a new iPhone with lower prices to attract customers, said Mr Opas, while Android smartphone makers may aim to market phones with higher prices, particularly in the range of 18,000-19,000 baht, to boost their brand reputation.

He said demand for smartphones is likely to be flat or decline, as opposed to notebooks, assembled computer sets and large TV screens, which could see a surge in demand because of remote work and learning.

At this mobile expo, computers and notebooks are likely to contribute to 20-30% of the total sales throughout the event.

“We will see a mixture of IT products at the event rather than smartphones alone,” he said. “Huawei is also selling computer notebooks at the event.”

An industry source who requested anonymity said Huawei appears ready to focus more on its Matebook than smartphones as it faces a challenge obtaining mobile phone processor components from US suppliers.

“The slowdown of Huawei smartphone sales opens an opportunity for other Chinese smartphone brands to gain more market share,” said the source.

David Chan, country manager of Tecno Mobile, a Chinese smartphone maker, said the company sells handsets priced 2,000-7,000 baht and there is demand from the provinces and migrant workers.

The handset market could shrink at least 30% in 2020 from 15 million units last year in the wake of the pandemic, Mr Chan said.

Low-end smartphones are gathering pace this year, with handsets priced around 5,000 baht accounting for over half of total sales, he said.

How Spotify is trying to use its podcasting power to introduce new features into...

Germany to go into circuit-break lockdown as coronavirus cases surge

Investors Diurnal Team - October 25, 2020 0
A protester checks messages on social media during an anti-government demonstration.  (Photo by Pongpat Wongyala) Social media has permeated a broad range of activities in people's daily lives, from interacting with friends to running businesses, from catching up with celebrities to staying tuned to the news. In Thailand, social media has played an immense role in fostering space for people to share their political views and beliefs among their peers. Social media engagement in Thailand recently spiked as anti-government demonstrators used these platforms to ramp up political activities and share opinions. Social media posts almost doubled from normal days to 40 million on Oct 15, when police dispersed the remaining protesters camping outside Government House in fresh demonstrations that kicked off the day before. The number of posts remains substantial as the political crisis drags on. The government's attempts to muzzle certain political posts on mainstream social media platforms also prompted many netizens to explore new online channels, such as Russia-based messaging app Telegram, to stay
Tech

Investors Diurnal Team - October 14, 2020 0
The Apple iPhone 12 Pro Max being unveiled during a virtual product launch on Tuesday. The event was streamed from Tiskilwa, Illinois in the US. Bloomberg The new 5G-compatible iPhone 12 line could help push up demand in the smartphone market, with the government's tax rebate "Shop and Payback" scheme anticipated to be a key driver for the segment in the fourth quarter, according to tech pundits. Apple unveiled its iPhone 12 range at a virtual event on Tuesday. They consist of the iPhone 12 mini, iPhone 12, iPhone 12 Pro and iPhone 12 Pro Max, with starting prices of US$699, $799, $999 and $1099, respectively. The US tech giant has yet to announce when the iPhone 12 line will be made available in Thailand or the pricing in baht. Narathip Wirunechatapant, chief executive of Jaymart Mobile, the handset distributor arm of SET-listed Jay Mart, said the
Tech