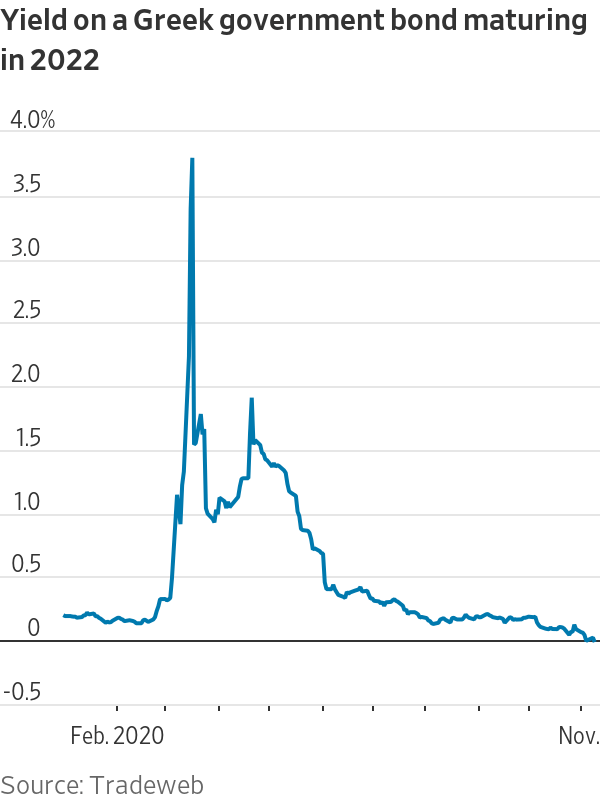 A rally in short-dated Greek government bonds this week sent their yield below zero for the first time, marking a significant turnaround in investors’ perceptions of Europe’s willingness to support its most indebted country.

The yield on Greece’s three-year bonds turned negative on Monday, reaching an intraday low of minus 0.037%, before edging back up to 0.007% on Tuesday. The yield on another bond maturing in about two years went subzero on Thursday and was at minus 0.013% on Tuesday.

Monday’s news about an advance in vaccine development by Pfizer Inc. spurred investors to pile into assets that would potentially benefit the most from the world reopening, including Greek debt and bonds issued by airlines and cruise companies.

Yields on both of the short-dated Greek bonds had briefly climbed above 3.5% during the worst of the market tumult in March, and were closer to 0.35% before the pandemic struck in February. In the months since, bond investors have started betting that the risk of lending to Greece has largely declined. That is due in large part to the European Central Bank’s massive stimulus program and efforts to backstop credit markets in the region.

Monday’s news about an advance in vaccine development by Pfizer Inc. spurred investors to pile into assets that would potentially benefit the most from the world reopening, including Greek debt and bonds issued by airlines and cruise companies.

Greece was for some years seen as one of the continent’s weakest links, and one that could potentially fracture the European Union during one of its multiple debt crises. The southern European country emerged from an international bailout program a little over two years ago.

“The ECB has taken away the risk and is expected to keep doing so,” said James Athey, an investment manager at Aberdeen Standard Investments.

Greece has previously sold three-month notes at negative rates. But this is the first time the yields—which move inversely to prices—have slid below zero on the nation’s two-year and three-year government bonds, according to Tradeweb.

The sharp drop in Greek bond yields also underscores the rapid convergence of various European nations’ cost of borrowing this year. Swaths of the government bond market in the region have offered negative yields for some time, especially on debt issued by wealthier nations—viewed as less risky—such as Germany, the Netherlands and Denmark. 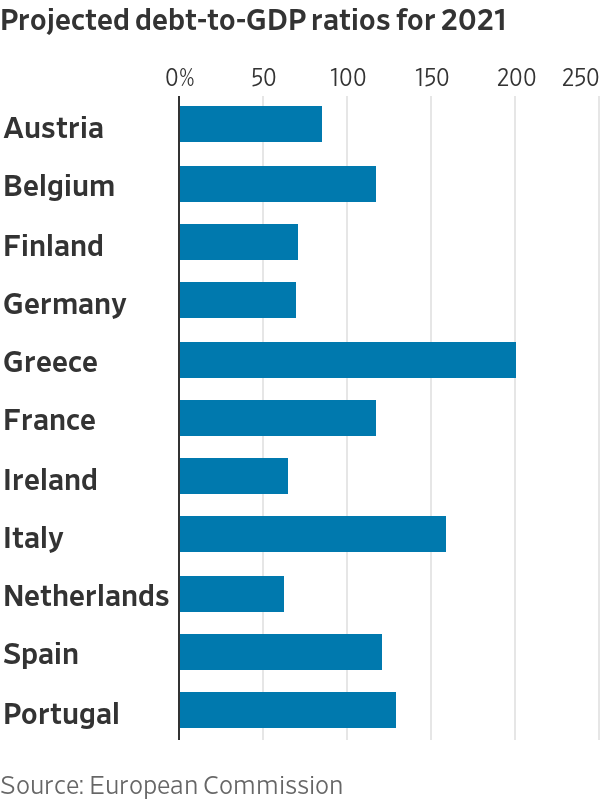 But Greece has been hit hard by pandemic-related travel restrictions due to its reliance on tourism. It entered a second national lockdown on Saturday, and the European Commission is projecting the country’s debt pile will swell above 200% of gross domestic product by the end of the year.

Despite this, investors and analysts are growing increasingly comfortable with its bonds.

Some are predicting that the ECB’s policy makers will increase their monetary stimulus package at a meeting next month. That would likely mean an extension to its bond-buying program, currently at €1.35 trillion, equivalent to $1.6 trillion. Earlier this year, the central bank amended its mandate to include purchases of Greek debt, a move that has helped bolster confidence in the market and bring the nation’s cost of borrowing down to record lows.

The ECB’s aggressive steps to support the region’s economy have also helped reduce yields on other government bonds that are usually considered to be risky. Italy’s cost of borrowing on 10-year debt has dropped to 0.7%, from close to 1.1% at the end of February, before the pandemic sent global markets into a tailspin. Analysts expect Spain and Portugal’s equivalent bonds to have subzero yields in the coming weeks.

On Friday, Moody’s Investors Service upgraded Greece’s credit rating by one notch, to Ba3 from B1, while keeping it below investment grade. Ongoing reforms are improving the economy’s growth prospects, and the country will also benefit from the European recovery fund and from “efforts to improve the investment climate,” the analysts wrote.

The outcome of the U.S. election is also seen as a positive for Europe, according to Mr. Athey.

“If President Trump had won a second term, he would have been more aggressive towards Europe on trade policy,” he said. “Biden will likely be collegiate and collaborative, which takes away a potential negative, as Europe relies heavily on trade.”

This will likely have an outsize effect on Greece: The country generated more than 37% of its GDP from exports in 2019, according to the World Bank.

Meanwhile, a rally in assets that are considered to be the safest—such as U.S. and German government bonds—ended on Monday after Joe Biden was widely declared the winner over the weekend.

Investors’ higher risk appetite, boosted by bets that a Covid-19 vaccine would help accelerate the global economic recovery, sent the yield on 10-year Treasurys on Monday up to 0.957%, its highest level since March 19. It slipped Tuesday to 0.942%.

When AAA Means Something Different in Chinese

Investors Diurnal Team - November 19, 2020 0
When is a AAA-rated asset not worth very much? In 2008 the answer turned out to be, when the asset is a mortgage-backed security declared AAA by a U.S. ratings company. This year the answer could be, when the issuer is a Chinese state-owned enterprise, and the AAA is applied by a Chinese ratings company. In China, around half of onshore corporate bonds are rated that high; in the U.S., S&P Global currently rates just Microsoft and Johnson & Johnson AAA. Chinese rating companies tend to emphasize government support as a key metric, a problem when governments don’t live up to expectations. Defaults by several companies owned by local governments—including the parent of Brilliance Automotive and a mining firm in Henan province—have helped send AAA yields and short-term borrowing rates sharply higher. Particularly disturbing for investors, key assets were moved out of the issuing companies shortly before the defaults. A chip maker owned by the central government has also defaulted, a rarity. The central government’s implicit debt guarantee is usually assumed to be much stronger than those of local governments, which are often starved for revenue. China’s central bank
Economy

How Election Results Are Rippling Through the Stock Market